The remodeled market hall became City Hall in 1861, but the Milwaukee Sentinel derided the result. 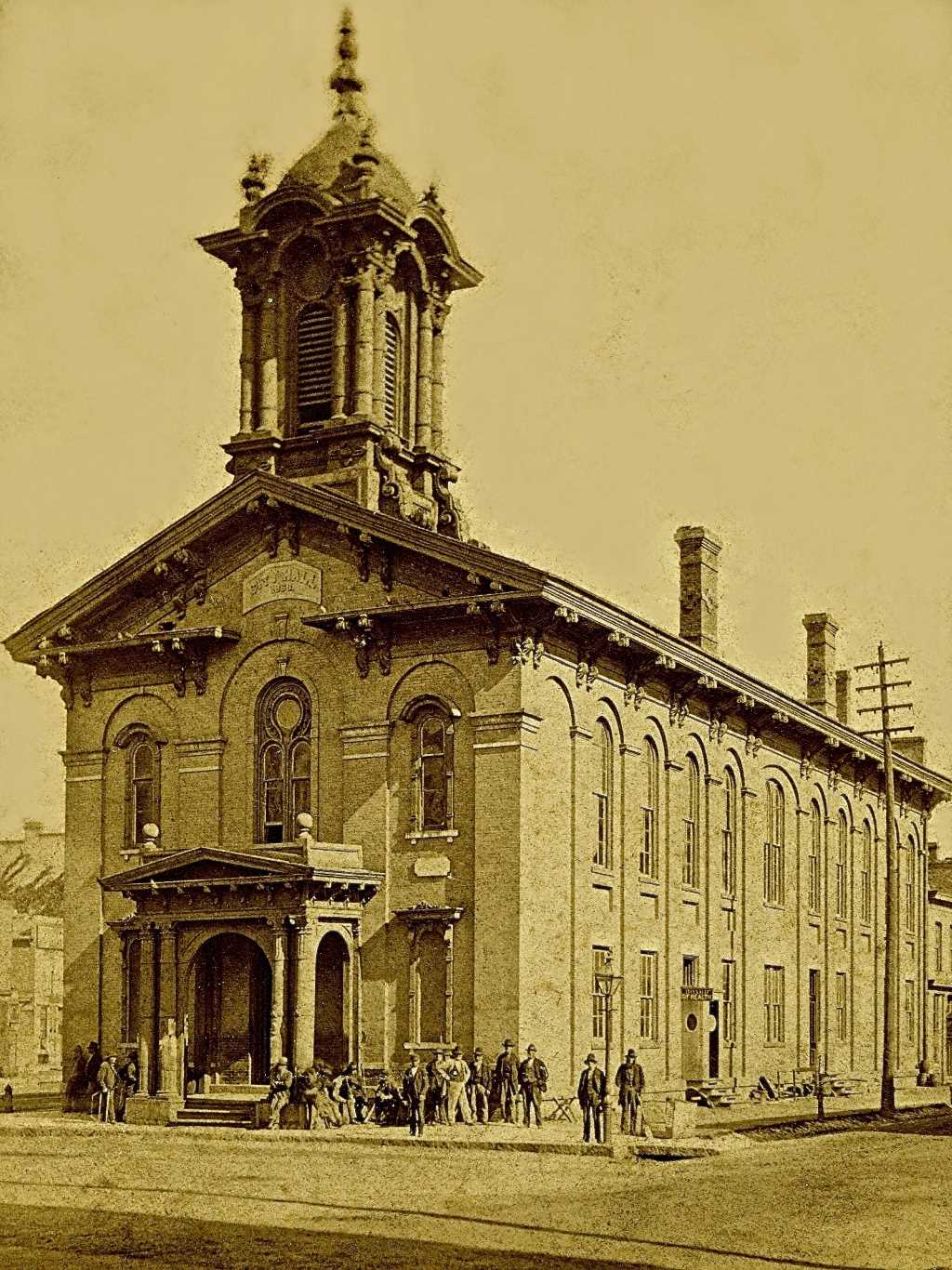 When Henry H. Bennett photographed his stereoviews of Milwaukee from 1879 and for another decade this was a most interesting time to record the city. In the port-Civil War period the population boomed and in the downtown area many of the older buildings were being replaced with larger and more elaborate structures.

The modest building in this view is Milwaukee City Hall. The building was originally a market hall that was on the very same site as the current City Hall. The block to the south, where Market St. and Water St. merged, earned the name Market Square in this way. In 1860 architect Edward Townsend Mix was selected to convert the market hall into a new city hall. The public reaction to this new home for city government, however, was not necessarily positive as this commentary printed in the May 7, 1861 edition of the Milwaukee Sentinel illustrates:

Those who remember the ungainly accumulation of bricks which stood at the junction of East Water and Market Sts., and which was dignified outside with the appellation of ‘Market Hall’, and inside with the trappings of a thespian temple, will have no difficulty in recognizing an old acquaintance in the present municipal palace, which, with the aid of a skillful architect and a bungling contractor, has grown into the dignity of a City Hall. It was never widely celebrated outside of Milwaukee for its beauty. Strangers who visited our otherwise beautiful city were strangely quiet concerning its chaste grandeur, and subdued magnificence; and such being the case, it can hardly be expected that the unfortunate building will receive anything but sympathy, now that it has passed through the most merciless of regenerations. It is true that it has a new dignity when viewed from the street above. Its profuse cupola struggling with an overdose of gingerbread work and gaunt scaffolds, looks well. Its semi-hyper-Italian portico looms up invitingly, and the bald niches in the ancient walls need only the manly form of the contractor modeled in plaster to complete the ‘tout ensemble’ of this great pile…

The new City Hall is now occupied by the city officers. The entrance is on Market Square, leading into a hall eight feet wide. The first thing that arrests the attention is the flooring and the less said about it the better. If the mechanics who superintended the laying had used a plough instead of a jack-plane, it would have been much smoother… The [Council Chamber] is lighted by means of an endless horizontal gas pipe… in the center of the room, with the little jets bristling all over it. Whoever originated this novel (but not brilliant) method of throwing light upon the council deserves especial praise. No phlegmatic Alderman will ever be able to raise his eyes to this original burner without feeling a smile coming over his care-worn countenance. It may be only proper to state that the panels under the windows are subject to cracks, technically called checks, in which a great deal of putty will have to be pushed should the chamber ever be finished up in the same spirit of economical splendor with which it was commenced, and the stiles of the doors – that are innocent of sand paper – will need rubbing down with a brick, and the two spots of grey mortar that stare like enormous bull’s eyes either side of the President’s stand will need a little whiting, or plaster of Paris, or chalk, or skim milk to make them look less conspicuous. These things will however, be all remedied by the contractor, (who is a practical painter) provided the city pays extra for it.

Ouch! Critics could be so harsh. But this charming structure would survive until 1893 when the current, landmark City Hall began construction.