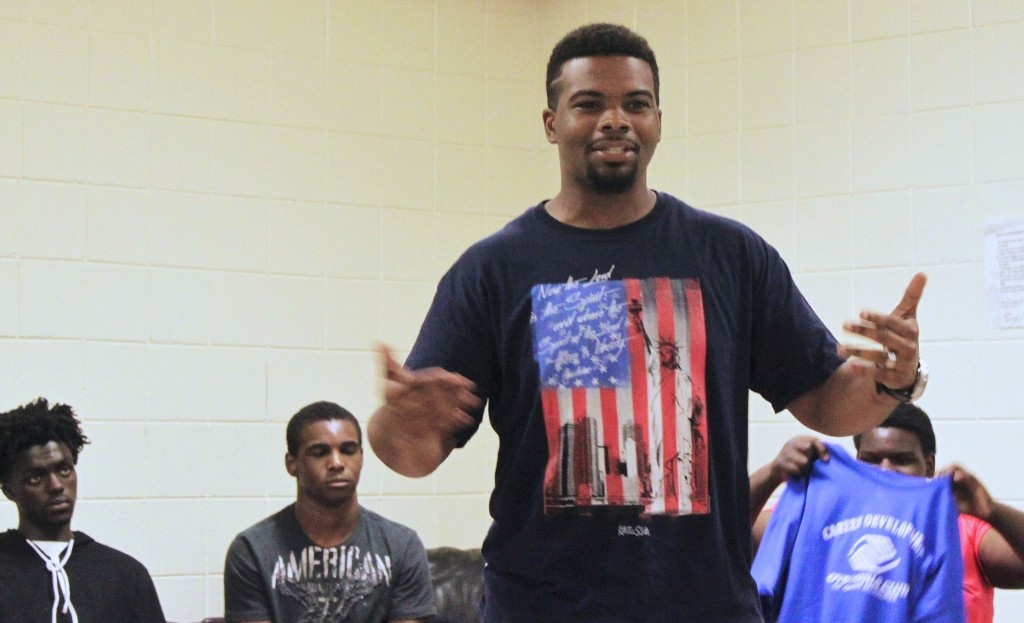 Mentor Ben Harris tells Youth Works Milwaukee teens about his past reckless behavior, hoping they can learn from his mistakes. Photo by Matthew Wisla.

About 50 male high school students and adult men sit in a large circle listening as Ben Harris talks about the mistakes he made in his teens and early adulthood. His voice fills the room; all eyes are on him.

“After I crashed through the guardrail the car rolled over seven times and I crawled out on my hands and knees through the window,” Harris said, arms and legs crawling through the air to show what it was like.

After several stories about his past reckless behavior, Harris, 31, described his current life as a successful multimedia producer. Then he brought his presentation to a close saying, “What you need to understand is that you don’t have to end up in life in the same place as where you started.”

Welcome to Mentor Monday at the Youth Works Milwaukee program. Harris is a mentor in a yearlong pilot program intended to reduce the rate of violent crime among high school age black males by providing jobs, life coaching and mentoring. Unlike most community initiatives, Youth Works Milwaukee hopes to turn a profit for investors while saving money for taxpayers.

If the program moves from the pilot phase to implementation, crime data and police records will be used to determine whether violent crimes were reduced. If so, taxpayers and local government departments, such as the police and courts, save money that would be returned to investors. 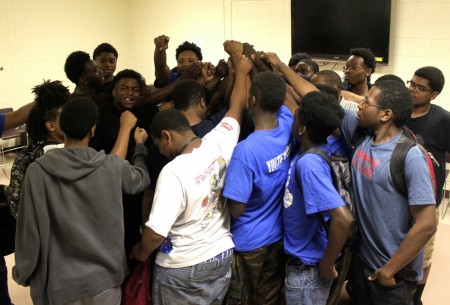 Participants in Youth Works Milwaukee support one another. Photo by Matthew Wisla.

This program model has been effective in Chicago where students in a similar program had 43 percent fewer violent-crime arrests last year than those in a control group. The Youth Works Milwaukee pilot, funded by the Wisconsin Department of Children and Families, was also given the opportunity by the National Council on Crime and Delinquency to test the feasibility of a “pay for success” model of funding here. If the pilot is successful, an investor would be sought to fund the program beginning next summer. Assuming violent crime goes down, the investor would be repaid, potentially with interest. If it doesn’t, there would be no repayment.

The idea to try the program in Milwaukee came from the #Community Advocates Public Policy Institute#, which is administering the pilot. “We saw the issue of violent crime in our communities and thought this (type of program) might be a way to tackle it,” said Kari Lerch, deputy director.

The pilot program kicked off in June and the Public Policy Institute is holding discussions with local government officials and potential investors, including community organizations and private individuals Local government departments that stand to benefit most from cost savings realized through lower crime rates include the Department of Corrections, the courts and police.

Youth Works Milwaukee has 37 participants from James Madison High School, 8135 W. Florist Ave. Many have been involved with the criminal justice system or gotten into trouble at school.

“For this program to make a difference in people’s lives and the community we wanted guys with high risk factors (for criminal activity),” said Walter Goodwyn, program director.

Initially, about 90 students were identified as potential participants based on whether they have a criminal record, have been suspended from school or live in ZIP codes with high rates of juvenile crime, according to Goodwyn. Students took part in several weeks of workshops, presentations and interviews to learn about the program and decide if they wanted to participate.

It’s not for everyone

After learning about the program, some students withdrew from consideration, and space limitations excluded others. “Some of the ones we chose said they wanted to stay out of trouble,” said Goodwyn. “Some want to be an example to others in their neighborhood and show them that there’s a better way, and others wanted to be part of the community we’re creating with this program.”

Echoing Harris, Goodwyn said that a student’s demographics or risk factors needn’t dictate his destiny. He thinks many students can improve their prospects in life if given the right opportunities and coaching. “I believe in young men who don’t have everything going for them, that they are redeemable,” Goodwyn said. “You can see the hope in their eyes.”

The Robinson brothers, Anthony, 18, and Christian, 17, were both selected for the program. “I really pay attention when I’m here because they can teach me how to be a better man,” Anthony said.

“They care about us here. They said they don’t want to hear about us on the news,” Christian commented.

A key component of the Youth Works Milwaukee program is providing a job for each participant. The program partners with an existing jobs program at the Boys & Girls Clubs of Greater Milwaukee. Mentor Monday meetings are held in the club location in Sherman Park, 3000 N. Sherman Blvd. Students started working at companies and organizations throughout Milwaukee beginning on June 30. About 40 employers participate in the Boys & Girls Clubs program, including Boston Store, U.S. Cellular, Walgreens and Circle 1 Network.

Students earn $7.50 an hour, more than Wisconsin’s minimum wage of $7.25. There is no cost to the employer. In many cases students are eventually hired onto the payroll once they’ve proven themselves. For example, Boston Store has hired about 50 students from the Boys & Girls Clubs program in the last four years, according to Mike Waite, director of career development.

According to a report from the Brookings Institution, each year a high school student works results in a 15 percent increase in income in his or her 20s. And analysts at the National Bureau of Economic Research working with data from the Chicago “pay for success” program demonstrated a correlation between working teens and a reduction in violent crimes. However, according to Waite and other experts, it is difficult for teens to find jobs in an economy where they are competing with adults for seasonal and minimum wage positions. In summer 2014, 4.5 million teens in the U.S. were working, compared with 7.2 million in 2000, according to Brookings.

“The (teens) in programs like ours have opportunities that just aren’t available to others,” Waite said.

As part of Youth Works Milwaukee participants receive job skills training focused on interviewing skills, attire and how to communicate effectively with supervisors and co-workers. Students also learn how to manage their money and participants have the opportunity to open a bank account through a special program with PNC Bank.

Recently, Christian and Anthony Robinson took home their first paychecks. Christian has a job tidying up animal houses at the Milwaukee Zoo as an assistant janitor, and Anthony works at the Urban Ecology Center. The income has given them the chance to contribute to the household budget, they said.

By this time next year organizers of Youth Works Milwaukee will know if the pilot initiative has helped reduce violent crime and whether the city will agree to pay investors when the program meets its goals. In the meantime, it continues providing hope and opportunity to a group of high school students growing up in tough surroundings.

“Some boys (in the neighborhood) blame themselves for what they’re going through in their lives,” said Christian Robinson. “Here we don’t have to worry like that. Everyone has our back.”