A big success in its inaugural ride last year, the night-time event returns this summer, and could sell out soon.

By Dave Schlabowske, Bike Federation of Wisconsin - Apr 24th, 2015 12:40 pm
Get a daily rundown of the top stories on Urban Milwaukee

We were over the moon about the positive response to our inaugural Polish Moon Ride last August. We had 376 people on that first ride, including many families with kids. We raised about $9,000 toward our goal of opening a community bike shop in the first floor of our Milwaukee location. This year (July 31st) we hope to double the number of event participants and revenue earned so we can afford to open the doors to the new shop this fall.

We have tried to keep the ride registration fee low, and included a special reduced rate for members of the south side neighborhoods our ride rolls through. All profits from the fee (after paying the ride permit fees, other street closure expenses and for musicians in all the bands) will go towards building out the community bike shop and supporting programming once the shop is open.

If you didn’t make it to the Polish Moon Ride last year, check out this great little video by photographer Richard Beauchamp, with editing by Dragos Popa from Mainly Editing and of course polka by Don Turner and the Polish Moon Trio.

This year we are going to cap the ride at 700 people, so you might want to register soon as it could sell out. As of this morning, we already have 232 people going!

Of course I can’t promise the amazing fog that created such an introspective atmosphere on last year’s Polish Moon Ride, but I can promise this year will have more polka and accordion players on the ride! Yes, Turner and the Polish Moon Trio will be there along with a special guest Milwaukee ex-pat accordion player from San Diego, California. If I can find another player who is game to sit on the back of an Xtracycle, we may have three accordions on the ride this year.

I am particularly excited about the addition of this year’s opening band, MX Rugido Norteño! They kick off the block party with their Milwaukee brand of musica norteña at 5:30 PM outside Annodyne Coffee Roasters at 224 W. Bruce Street.

We will have great food from south side vendors again this year:

New this year, your ride bag will include coupons you can redeem with vendors at the ride or at their permanent locations later!

Also new this year, in case you get a flat or have a mechanical problem, we will have an improved method to request ride support from Ben’s Cycle and Fitness and Coast In Bikes. Last year a couple people had flats and didn’t know how to call ride support. Coast In Bikes and Ben’s helped them out, but there were some nervous moments for these out-of-towners. 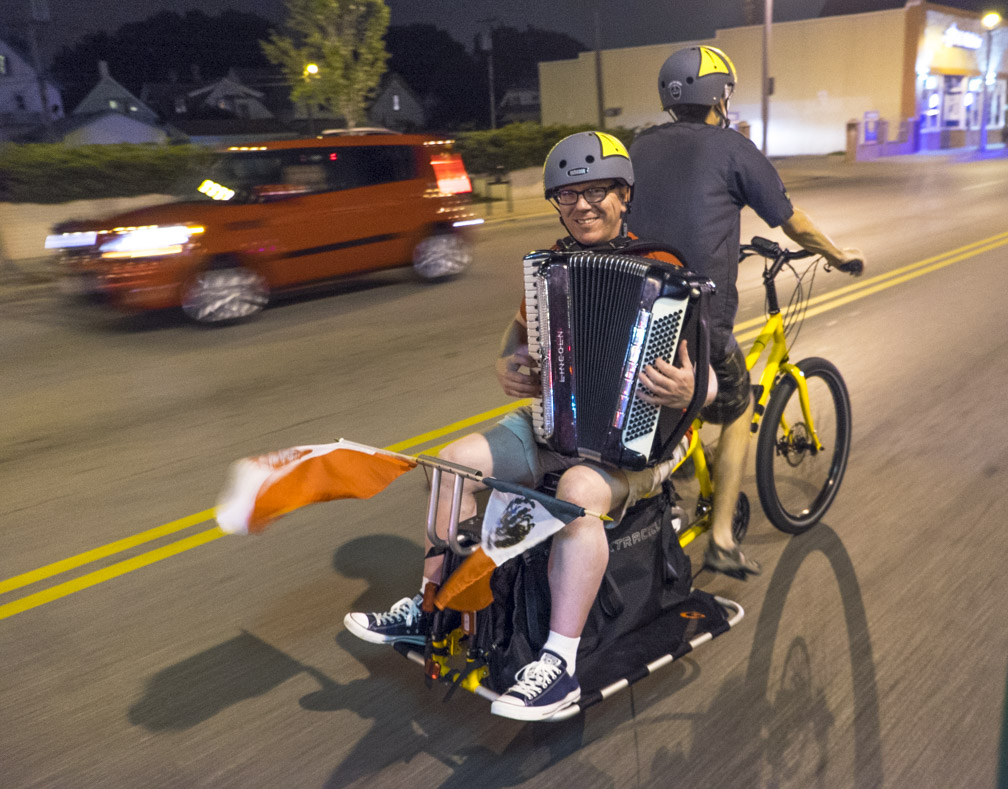 Oh yeah, we’ve got accordion! Thanks Don Turner from bringing the Polka and Tristan Klein for piloting the precious cargo. If you’re an accordion player who wants to come on the ride, contact me. You can never have too many accordion players, right? (Photo by Dave Schlabowske)

The ride will leave at 7 PM this year instead of 8 PM and will follow last year’s eight mile route. We will roll together as a group on led by the Milwaukee Police Department and everyone should end up back at Bruce Street between 8:30 and 9 PM. Last year we had 3-4 officers on motorcycles who did an amazing job blocking traffic and keeping everyone safe. This year if the numbers double, we will probably need a couple more officers to help.

With 400-750 people, our string of blinking riders stretches half a mile or more, but Milwaukee Police provide amazing support for the ride. With motorcycles leading and following the group and blocking intersections when needed, even parents with small children riding felt safe enough to let their kids ride down the middle of major streets at night. That is an experience most kids never have. 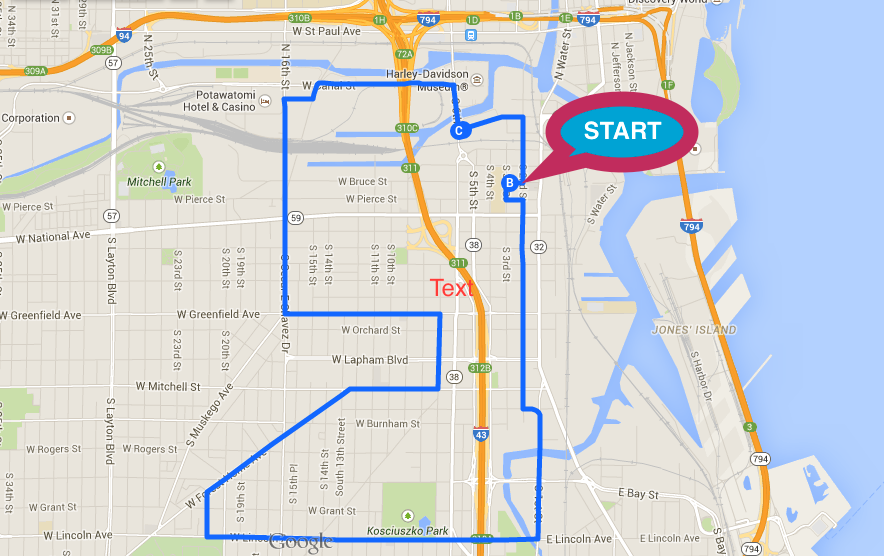 Click on image to open route in Google Maps.

With more accordions playing from the back of  E-assist Xtracycles courtesy of Coast In Bikes, more people on the ride should be able to polka on their pedals.

We keep the group together by moving at a slow pace and stopping at red lights to let people “mass up.”  Even though it caused a bit of a traffic jam on the Hank Aaron State Trail last year, we will probably still take the path on Canal Street and also down the west sidewalk on the 6th Street Bridge so everyone can ride down the cool spiral ramps to Freshwater Way. 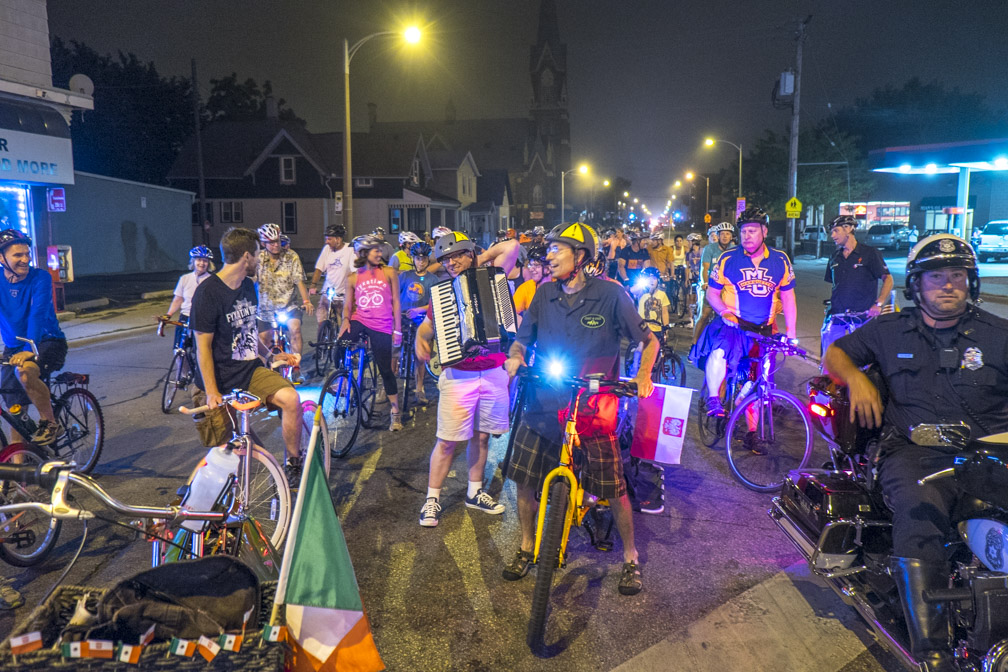 Seventh inning stretch, south side style! Thanks to the extremely professional and accommodating officers from the Milwaukee Police Dept. who provided safe ride support. (Photo by Dave Schlabowske)

We will once again have bike parking at the start/finish location with racks courtesy Coast In Bikes and Eppstein Uhen Architects, but bring a lock as the parking will not be valet.

Stay tuned to the Polish Moon Facebook page for updates about where to park your car if you are coming from out of town. We are working to get access to a parking lot at the nearby Bradley Tech High School. This year we will add security to watch over the parked cars from 7 PM to 11:30 PM while everyone is away riding or inside listening to Polka.

We are working with the offices of Alderman José Pérez and State Representative JoCasta Zamarripa to help us increase community involvement. We are also meeting with the organizers from the Southside Bicycle Day to coordinate with them. Since their successful event is during the day and in June, we might help them get a similar daytime version of our ride going. 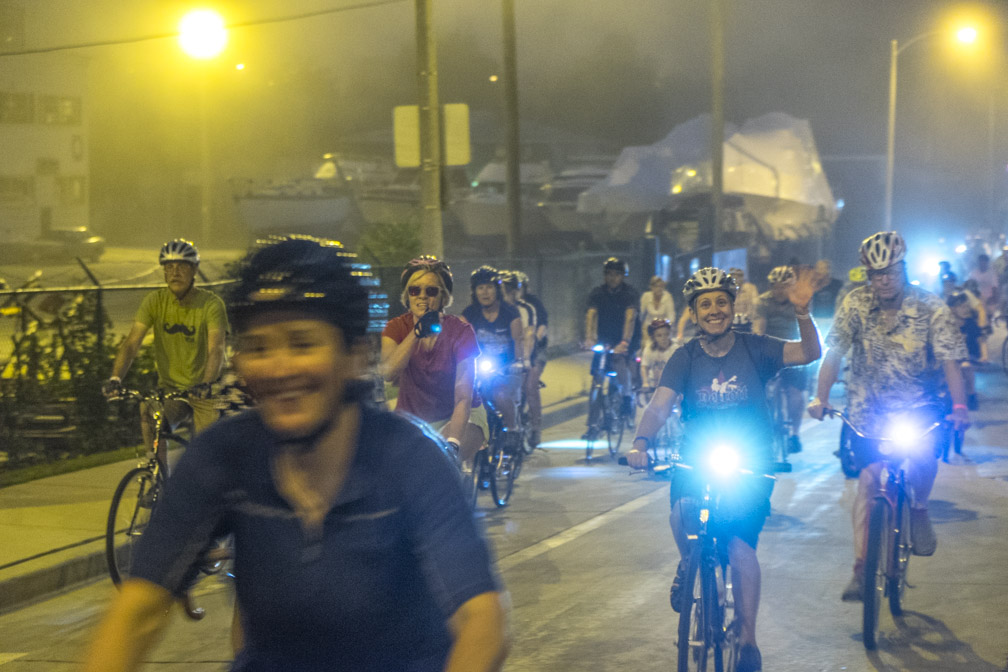 We can promise more smiles on this year’s ride. (Photo by Dave Schlabowske) 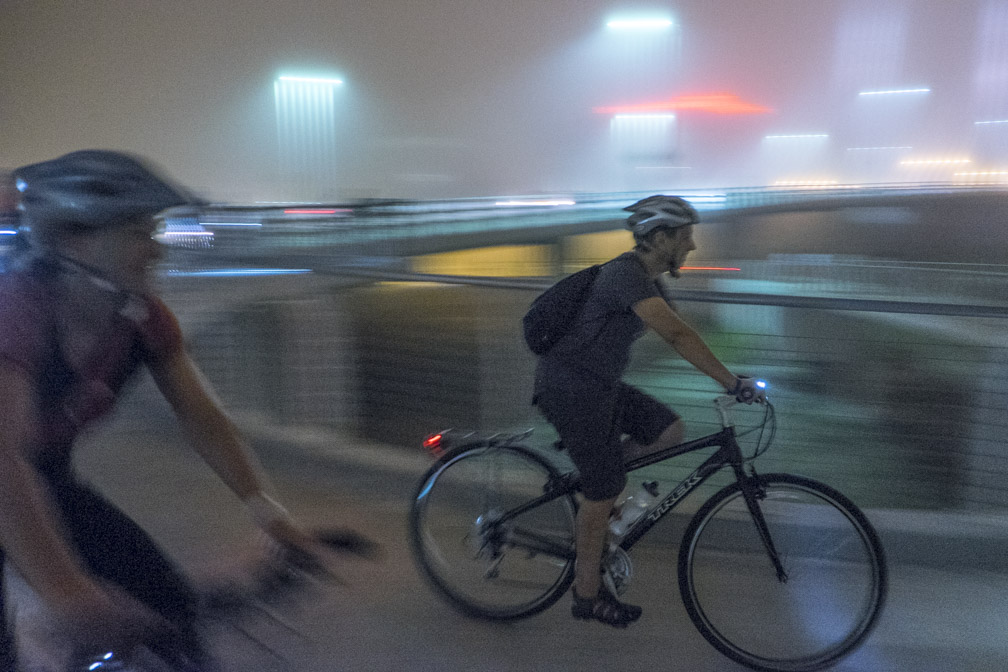 The new ramp down from the 6th St. Bridge to Freshwater Way was opened as a result of our ride – Bike Fed accordion advocacy at work! (Photo by Dave Schlabowske) 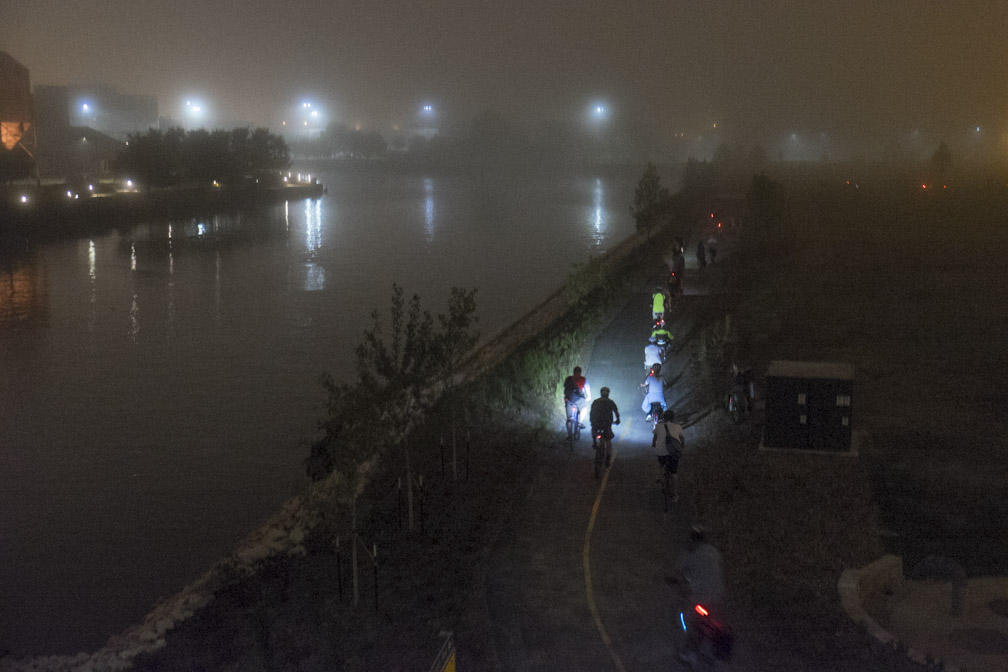 And remember, as fun as the ride is, the ride fees will allow the Bike Fed to open a new Community Bike Shop in a neighborhood that is a bike shop desert! 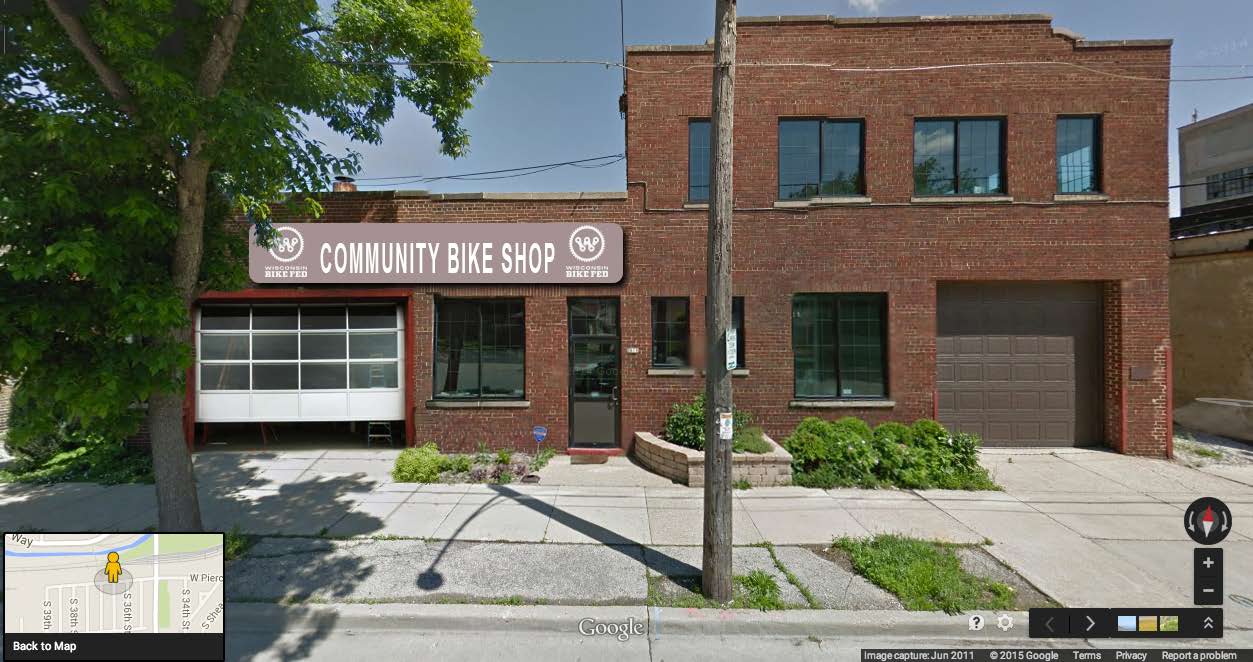 REGISTER FOR THE RIDE