In 1961 when Inherit the Wind starring Spencer Tracy and Frederic March hit the Milwaukee screens six years after the play stunned Broadway with a bold fictionalization of the 1925 Scopes “Monkey” trial in Tennessee, my enlightened Jesuit theology teacher at Marquette University made a prediction to his class. This dramatization of what he called “our God-given right to think” would finally end “any religious cult” arguing incompatibility between Darwin’s theory of evolution and the biblical tale of the Creation.

He was probably the kind of social optimist who believed the Selma march 50 years ago would put to rest the civil rights conflict.

Today the war between creationism and evolution continues just as hard in slightly new guises, down to so-called ‘science museums” in several states where schoolchildren are taken to see man astride dinosaurs. Few dramas have been brazen enough to explore directly and intelligently how that church vs. science rationale is shaping the adolescent mind, certainly not with the vigor and modern cultural terminology of experienced Canadian playwright Stephen Massicotte. Even in front of an evolution- friendly audience at Next Act Theatre (in a state where more than a dozen schools still do teach creationism as the basis of science), the bluntness of the division set off melodramatic sparks in Ten Questions (to Ask Your Biology Teacher About Evolution).

This world premiere through May 3 does tilt the scales toward science rather than literal belief in the story of Genesis – and while that seems as sensible today as it did to my Jesuit theologian, the story suffers from a feeling that Dr.Freud and Albert Einstein combined to write a soap opera. Yet it’s so well cast and so well directed for speed, focus and confrontations that it still makes a lively evening of theater.

The “Ten Questions” are actually a snare set by creationists to unsettle Ms. Kelly, the devoted new biology teacher in a conservative Midwest community. She knows that however she answers it’s a trap. Yet she remains determined to open the mind of surly, clever Raymond, the devout, disruptive student convinced the world is 6,600 years old and that she along with Darwin is the devil’s tool. Raymond is motivated by his own upbringing and the desire to please his widowed mother, a rabid fundamentalist who has influence with the school board. Mr. Lester, an alert bureaucrat and acting principal with something of a yen for Ms. Kelly, tries to run interference.

This could merely be an ideological cartoon debate with smart punchlines and arranged character clashes. What keeps us attentive even when not convinced is an expert ensemble under an expert director, Shawn Douglas. He never calls attention to his staging devices (there are illustrated classroom slides to bring evolution down to earth) but encourages quick emotional responses and humanistic kernels from assured actors.

Along with genuine theatrical skills, Massicotte has a tendency to overwrite. His passion to sweep the audience up in the discussion can’t disguise that this is a loaded debate with three endings, several puppet strings and a football field confrontation that comes across as manipulative.

He’s trying to give faith its fair due, but has concocted yet another extreme evangelical mother almost paranoid in her attitudes facing a science teacher of fast comebacks, an understanding, “can’t we all get along” principal and a high school kid so bright in his repartee yet so slouchily defiant in his body language that the audience wants to kick his Christian devotion into the next century.

That we almost believe in these cutouts reminds us that interesting contemporary commentary on social issues requires good casting first and foremost. It’s an important lesson for theaters to learn. People over flash. Acting talents can carry us past the cloying and invigorate those confrontations that in wiser moments we know are artificial.

Not that the debate doesn’t have moments of fun – but not on its own. These actors mine the best laughs in the asides not the putdowns. They downplay the obvious or elevate the maudlin through the audience rapport they’ve established.

Massicotte  is astute enough to honor the heritage of the debate, even quoting Inherit the Wind’s arguments  and finding his own metaphor to slap together Darwin’s “Origin of the Species” and the Bible. It’s the same message in a new drama – affinity after brutal conflict, tolerance for the appeals of both science and religion, co-existence between proof and faith.

Essential to the production’s success is Deborah Staples, an actress rightly beloved of theatergoers whether the role be classic or contemporary.  She has moved from an astonishingly nuanced performance in the Milwaukee Rep’s “The Amish Project” to winning cinematic naturalness as Ms. Kelly.

The aura of believability she creates out of a familiarly motivated role deserves a tribute even warmer than the one provided her in the Next Act newsletter by the theater’s artistic director, who also happens to be her husband and co-star. As Mr. Lester, David Cecsarini slides in with relaxed wit to cool the anger and charm both the audience and the amused biology teacher.

Another familiar Milwaukee actress, Mary MacDonald Kerr, works hard toward providing fuller dimensions than written for the uptight anti-science mother. Kyle Curry, playing younger than his real age as Raymond, almost makes convincing a high school student who sounds like a college graduate. He has the right mannerisms and dry delivery, but we can never quite believe the unthinking creationist rhetoric he spouts. 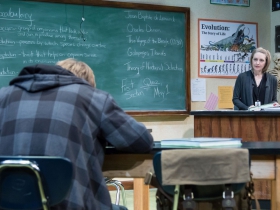 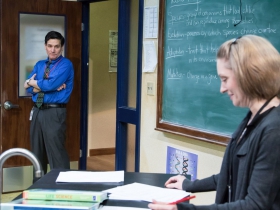 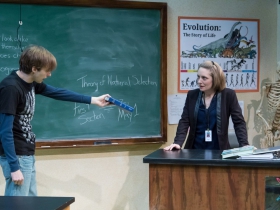 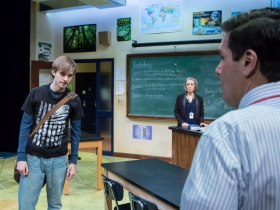 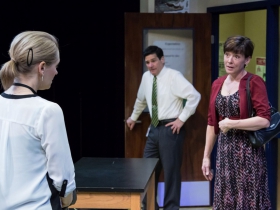 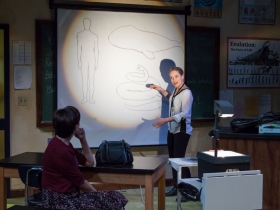