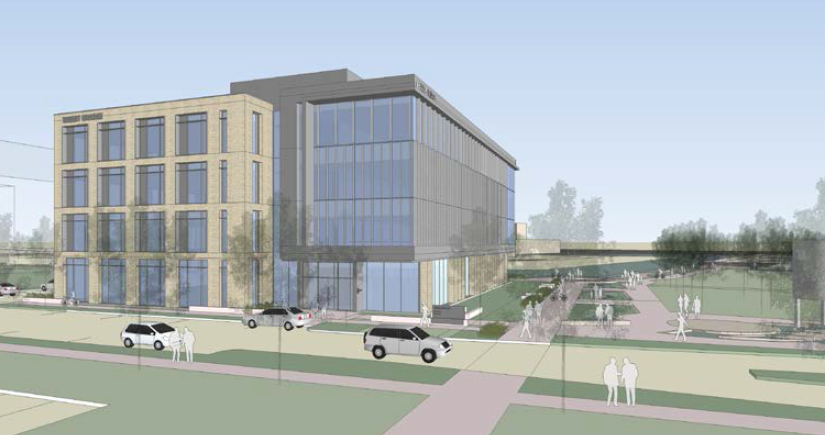 Rendering of Water Tech One.

Water was in the news this week, specifically, a 80,000-square-foot, four-story, LEED-Certified office building, Water Tech One, that will be built in the Reed Street Yards Global Water Technology Park. The building, which would house water technology companies, is being developed by General Capital Group LLP in partnership with local developer Peter Moede and would be be the first new building located in the 17 acre water park in Walker’s Point.

Berghammer Construction Corp., the general contractor on the project, is in process of lining up the subcontractors and suppliers to begin construction of Water Tech One. Berghammer is looking for any firms certified by the Milwaukee Small Business Enterprise and Residential Preference Program to respond to a recently published request for proposals, by April 2nd 2015 at 10 a.m., to receive construction contracts on the project. According to an online post at the Milwaukee Courier, contracts for mechanical, electrical, plumbing, fire protection, and window systems work have already been awarded.

Water Tech One, designed by Kahler Slater Inc., is expected to be ready for tenants to move in by the summer of 2016. Michael Weiss, president of General Capital,  tells Urban Milwaukee in an email that, “We are shooting for a May construction start. Regarding tenants – great progress – but nothing to announce today.”

To prepare the Reed Street Yards for redevelopment, in 2009 the city created Tax Incremental District #75 to fund infrastructure for the site. In 2011 the TID was amended to provide $6.2 million for public infrastructure and in 2014 the TID was again amended to include an additional $1.3 million. Much of the infrastructure has now been built, including an extension of the Hank Aaron State Trail which connects to the 6th Street Viaduct, a 2,700 foot RiverWalk segment, repairs to 300 feet of dockwall, sewer connections, a new road named Freshwater Way that includes curb bumpouts and bioswales, signage, lighting and soon the installation of a Bublr Bikes bike-share station. Additionally, $660,000 was allocated to the Florida Lofts, 408 W. Florida St., project for streetscaping, planting beds, public parking, a green roof and plaza, and foundations for a bridge that would connect from the Reed Street Yards to the building on W. Florida St. Hovde Properties, LLC is converting an existing Coakley Brothers warehouse into 98 apartment, 17,376 square feet of retail space, and 200 parking spots. $5 million was also set aside from the TIF to create a public/private venture fund to assist in recruiting business and creating jobs.

Water Tech One Renderings and Plans 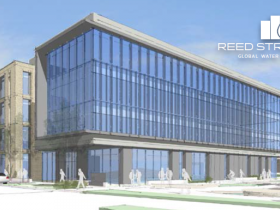 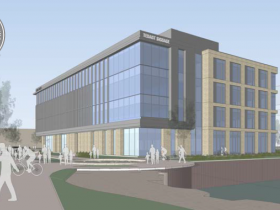 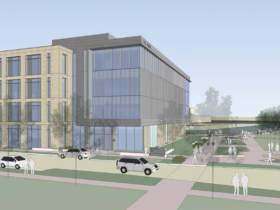 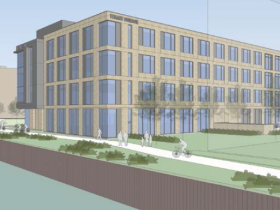 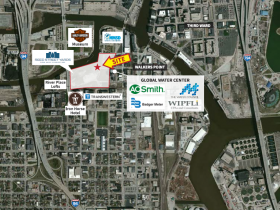 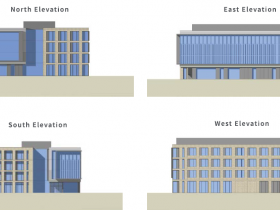 In was actually a pretty quiet week for arena news, but there was a story by Alison Bauter, of the Business Journal reporting that the group “Play it Forward” rallied in support of the arena prior to a public meeting on the state budget. Her colleague Rich Kirchen wrote a story telling us, “Milwaukee Bucks co-owner Jamie Dinan won a master-class stock-picking contest and donated the $88,896 to the Museum of the City of New York.” But the question is, has Dinan picked a winner in the Bucks?

And finally, Bucks president Peter Feigin tells Kirchen, “We’ve got to get the package together — in a perfect world with the state, the city and the county — by about the first week of April…So it’s nice and pretty and ribboned up and we have a great story to pitch to the Joint Finance Committee for budget approval.”

-The City of Milwaukee issued a Request for Proposals for 1027 N. Edison St., a city-owned, downtown site along the Milwaukee River. In December 2007 Russ Davis responded to a previous city RFP for this site with a proposal to build an environmentally friendly, eight-story, mixed-use building, known as Edison Green, on the site, but the project never moved forward.

-For sale, again? On March 17th,  Sean Ryan, of the Business Journal reported that the Milwaukee County Parks, Energy and Environment Committee voted 4-3 to declare O’Donnell Park surplus, and to issue a request for proposals to sell it. It’s not clear if this could pass the full board, or not, but maybe local-developer Peter Renner, who inquired about purchasing the property in 2010, long before Northwestern Mutual did, will finally put an offer down.

And in case you missed it, we featured 833 East in last week’s Friday Photos.