Analysis of big cities shows Portland is most gentrified, with cities like Milwaukee also changing, but more slowly. 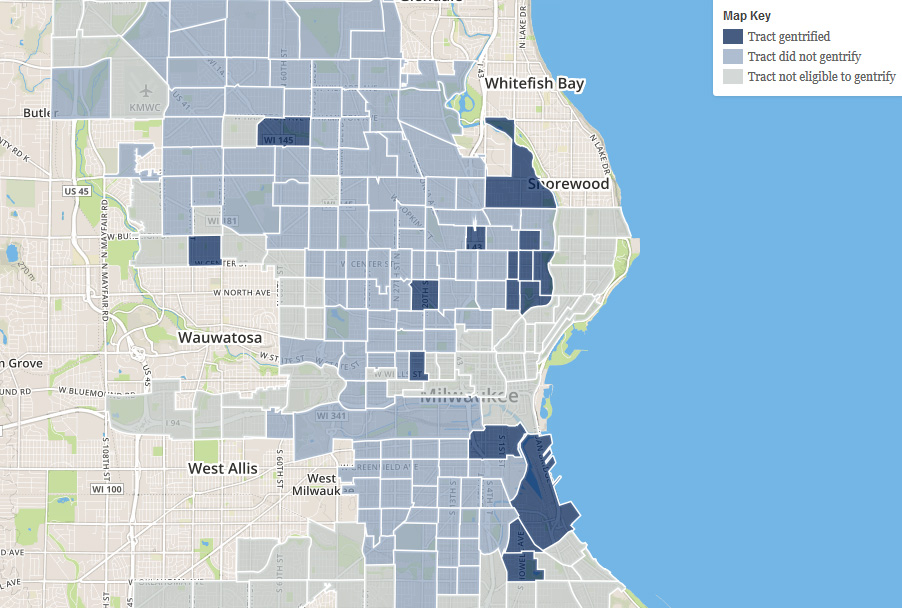 Census Tract Gentrification since the 2000 Census – From Governing.com and Google Maps

Gentrification is a loaded word. It can be both a positive (poor neighborhoods on the upswing!) and a negative (whites pushing out urban poor people!). For mayors of America’s big cities, with higher concentrations of poor people and surrounded by more well-to-do suburbs, it is welcome news. But among researchers and urban theorists, it is a charged subject.

Which brings us to a recent, data-driven story by Governing magazine, which looked at gentrification in the 50 biggest cities. The story found a significant increase in urban gentrification: “Nearly 20 percent of neighborhoods with lower incomes and home values have experienced gentrification since 2000, compared to only 9 percent during the 1990s.”

Governing looked at any big city census tracts where the median household income and home value were both in the bottom 40th percentile of all tracts in a metro area and then measured the growth of median home values and the percentage of adults with bachelors’ degrees. The “gentrified” tracts were those whose increases on both measures were in the top third among metro-area tracts.

For the 50 cities measured, the percent of poorer tracts that gentrified ranged from zero in the Texas cities of Arlington and El Paso to an incredible 58 percent in Portland. At least 50 percent of lower-income neighborhoods also gentrified in Minneapolis, Seattle and Washington, D.C. That’s remarkable.

The gentrification in Milwaukee, which is mapped by Governing, is largely where you’d expect it: in Brewers’ Hill, Riverwest (mostly gentrified except for one northern tract), Bay View (all of it gentrified except the southeastern area which wasn’t poor enough to need gentrifying), and the near South Side tract near National Ave. But there are also several other isolated tracts in Milwaukee that have gentrified for less obvious reasons during that period.

Why is gentrification occurring? Governing offers little explanation, other than a half-baked observation by Kjersti Monson, director of long-range planning for Minneapolis, “who cited the role of infrastructure investments, particularly light rail, the parks system and new sports stadiums downtown.” Meanwhile, the role of Millennials, whose gravitation to cities has been much discussed nationally, gets no mention.

Yet Governing concludes that gentrification “is changing the face of metropolitan areas in every region of the country and generating social consequences that would have seemed far-fetched just a few years ago.” These consequences, it reports, include “escalation in housing costs that has made in-town living unaffordable for all but the affluent; the rise in suburban poverty caused by the arrival of minorities and immigrants who used to be concentrated in central cities; and the creation of affluent urban communities in which traditional families are largely absent.”

In Portland and Seattle, perhaps. But in Milwaukee or any Midwestern city besides Minneapolis, the figures suggest far smaller changes. Indeed, Cleveland (6.7 percent gentrified since 2000) and of course Detroit (2.8 percent) had a smaller percentage of census tracts that gentrified than Milwaukee, while Columbus and Indianapolis, both at 12.2 percent, saw almost exactly the rate of change as Milwaukee.

Moreover, Governing’s suggestion that gentrification is pushing minorities to the suburbs seems contradicted by its data showing that in those tracts that gentrified, the share of non-Hispanic white residents increased by an average of 4.3 percent. That’s not much of a change.

Joe Cortright, a researcher at the City Observatory in Portland, the apparent epicenter of gentrification, blasted the Governing story, noting there has been abundant academic research showing that gentrification has actually displaced few poor or minority residents. How can an increase in well-to-do residents not push others out? Because the total population in the area increases.

As Cortright notes, the poverty rate in gentrified tracts included in Governing’s analysis declined by just 0.7 percent, while the total population increased by 6.5 percent, which would mean “the population living below the poverty line in these tracts had to have actually increased between 2000 and 2013; hardly evidence, on its face, of widespread displacement.”

The secret sauce in cities is density. Bay View isn’t just getting younger residents, it’s also getting more residents, as under-utilized properties get rehabbed into apartments and rental occupancy rates climb. Riverwest has seen home values and the percent of college educated adults increase, but residents there still struggle with crime and other signs of poverty.

Finally, there could be a significant problem with the data Governing is using. The U.S. Census Bureau’s American Community Survey data, which provides samples of the population, is quite problematic, says John Pawasarat, director of the UW-Milwaukee Employment & Training Institute. “The margin of error on that data is extremely high,” he cautions.

Pawasarat notes the data shows a tripling of college graduates from four percent to 12 percent of adults in a tract near 16th and North, a neighborhood with high rates of poverty and home foreclosures. “There’s no way that data could be accurate.”

Still, most of the changes Governing found in Milwaukee seem to conform with what we know anecdotally, that places like Bay View, Brewers’ Hill and Riverwest are becoming transformed. Beyond that, both the data and its meaning are open to lots of argument.