New play by “West Wing” writer is flat fare, but production is solid.

Imagine you pop a “Saturday Night Live” episode from two decades ago into your TV that a friend raved about. You chuckle a few times at topical  humor but an hour later you can’t recall a truly smart joke, a comment that hit home, a memorable exchange – and you realize there will be no lasting impact from the 90 minutes wasted.

If that sounds familiar, you are ready for the experience of Five Presidents, a new play commissioned by the Milwaukee Rep in partnership with the Arizona Theatre Company. There, according to reports, the same actors and same director (the Rep’s Mark Clements) had them rolling in the aisles for several weeks.

It sounded like a promising idea commissioned by Clements from Rick Cleveland, a veteran observer of White House politics and a polished craftsmen as many movies, plays and television shows attest. Indeed, Cleveland’s work with Aaron Sorkin on “The West Wing” created many of my fondest memories of political interludes and chatter that brought a touch of Camelot to the Beltway snake pit.

In this play, Cleveland has openly fictionalized a private meeting during Nixon’s 1994 California funeral of the presidents’ club (at that time Ford, Carter, Reagan and George H.W. Bush with the new upstart commander in chief, Clinton). Despite audience expectations, Cleveland is not even pretending a real conversation among the quintet. It’s his chance to imagine what we might wish they would say to and about each other. Stitching together noted moments from their histories, the script forces them over drinks to utterances and jokes about each other’s venalities, policies, prejudices and love-hate relationship with the executive office.

Nothing new here. It’s almost a collection of rejected vaudevillian excesses and research notes from Cleveland’s past work.

Since Cleveland is concocting back two decades, there are also chuckles based on hindsight superiority as these  presidents speculate on people they know and on America’s future  (Will there ever be a black president? What’s with this Hillary? How tragic for a Bush to lose 383 coalition lives in a Mideast war. Maybe one day young George will get as politically secure as his older brother Jeb.) The biggest laughs are barnyard humor, hints  of peccadilloes (oh, that randy Ronnie!) and comic putdowns that reviewers can’t give away.

Patrons may have hoped for more than the surface of the characters but have to settle for extended journeys into the expected —  Reagan’s Alzheimer moments, Clinton leaning in on people, Carter the peacemaker concealing his steel. Cleveland adds some historical touches, such as Bush still seething and nasty over his recent loss to Clinton and Ford carrying more than a grudge about the public’s refusal to grasp why he pardoned Nixon. But surprisingly for so accomplished a craftsman as Cleveland, in trying to flip through history and still provide dramatics, episodes are clumsy or telegraphed.

Clement moves the actors smoothly around Todd Edward Ivins’ boardroom, which is designed to be antiseptic and slightly askew. All the technical elements fit cunningly into the Quadracci Powerhouse – which is no less than expected or more than needed from so proficient a production team.

If the applause at the end is more than dutiful, it may be in part to acknowledge how rarely these days we see leaders from both parties pulling back from bickering to respectful collegiality. We do miss that. But it is the actors who should earn some applause for making the presidents a bit more than predictable cutouts from the past.

There are too obvious moments of physical gimmickry and gesturing from Steve Sheridan as Reagan and Brit Whittle as Clinton but they do keep us watching for the next move.  As Bush, Mark Jacoby has the difficult job of switching attitudes instantly to drive the plot points, and it takes a capable actor indeed to make such gymnastics seem something like character development.

Martin L’Herault catches more than Carter’s grin including the exact timing of anger at war with contrition. Jeff Steitzer is meant to be the most lovable in his honest buffoonery as the outspoken Ford. He delivers in full measure.

Which, unhappily, can’t be said about Cleveland’s script for Five Presidents. 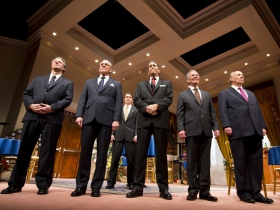 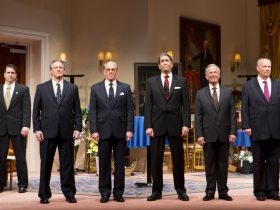 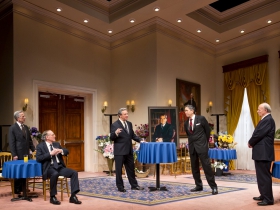 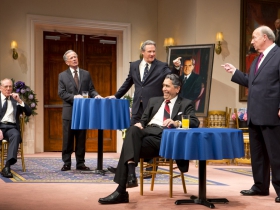 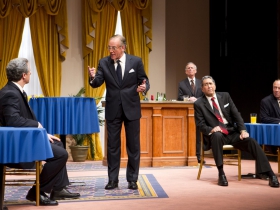 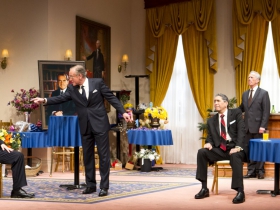