Lead singer Brittany Howard has been compared to Janis Joplin, but the band proved uniquely powerful in its own right.

The last time the Alabama Shakes visited Milwaukee, in March 2012, they hadn’t yet released their debut album, the critically-acclaimed and certifiably awesome Boys & Girls. Even so, their Pabst Theater show was sold-out, which was their biggest venue to date. At the time, the album was one month away from its release, but 88Nine RadioMilwaukee had been playing the band’s song “Hold On” for months, and it would be the first radio station in the nation to add the album to their rotation.

Fast forward three years, it’s March again, a new album is due in a month, 88Nine has been playing their latest single (“Don’t Wanna Fight”) a bunch, and the Shakes have sold out an even-bigger Milwaukee venue, the Riverside Theater. All the ingredients were in place for another memorable meal of music, and the Athens, Alabama roots rock band (with four additional members) delivered the delectables.

Before the Shakes took the stage a four-piece from northern Mali warmed up the crowd. Born out of a bloody civil war, Songhoy Blues shook out their share of ghosts during an electric opening set. The group sounds like an updated version of Booker T. & the M.G.’s with an African flair. Lead singer Aliou Touré got the loudest audience response with his animated dance moves.

The Shakes kicked off their set with “Rise to the Sun,” which includes the lyrics “I feel so homesick, where’s my home?” You have to wonder how close to the heart this sentiment is for the band, and specifically for their leader, Brittany Howard. It’s been three years of touring, festivals, showcases, TV appearances, invitations to Jack White’s studio, album recordings, etc., since they burst on the national music scene.

It didn’t take long for the Shakes to launch into their new single; it was second on the set. Before they started Howard told the crowd, “It’s good to be back.” Then she asked for the house lights to be turned on so she could, “have a look at them real quick.” The crew didn’t get the message until after they started playing but Brittany assumed the crowd was “looking good.” Meanwhile, it was back to music from the upcoming album, Sound & Color; in fact, most of the set consisted of new material.

“We’ve been looking to come back for a long time now,” Howard said a few songs in; “We’re going to play some new songs for you that ain’t nobody heard…kinda.” The addendum probably referred to the number of people who have pirated Sound & Color ahead of its release. I’m not one of those rapscallions, so it was harder for me to get into the show.

Touring in support of an unreleased album is a challenge for any band. The lack of familiarity is a mountain to climb, but the Shakes had their hiking boots on, metaphorically speaking. The added members, another keyboard player/percussionist plus three backup singers, created a more dynamic sound. Howard’s songwriting continues to explore the ups and downs of romantic relationships. The songs still build, crash and burn slow.

The stage was arranged so Howard had plenty of room to roam. She rocked out on her teal guitar until the final third of the set, when she set it down and belted out a string of songs, before picking it back up, then dropping it for the finale. Critics have compared her voice to Janis Joplin’s and my dad, who joined me at the show (along with my mom), was dying to hear a cover of something from Joplin’s Pearl. I suggested Howard might be more like Aretha Franklin meets B.B. King. Comparisons aside, Howard and company left their own imprint on the Riverside. The highlight of the night was when they played “Be Mine” off Boys & Girls, a beautiful blues number that builds to a blistering crescendo. 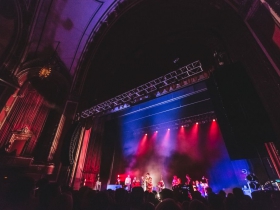 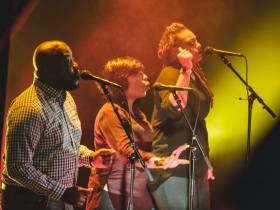 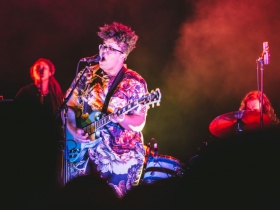 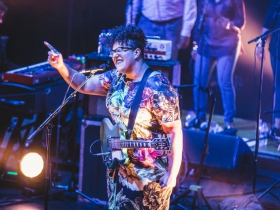 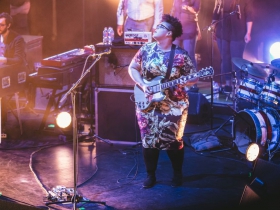 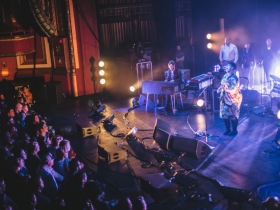 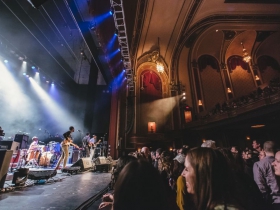 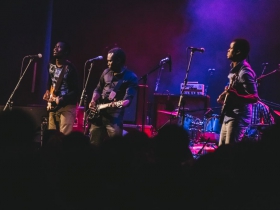 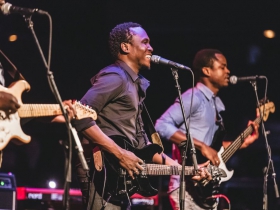 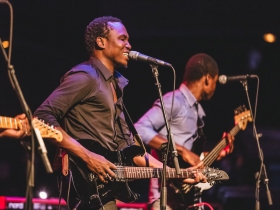 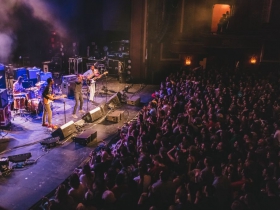 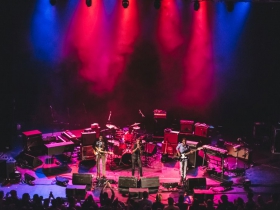