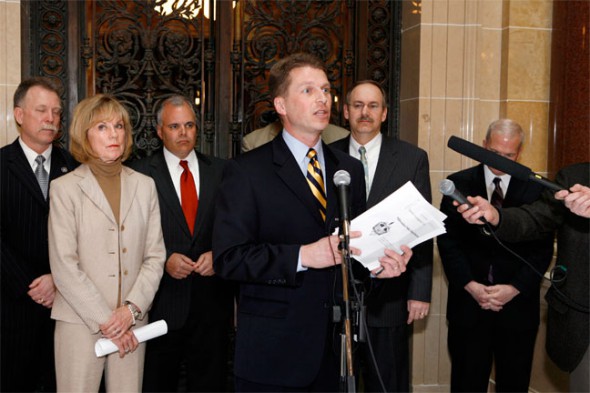 The revolving door between Capitol officials and the lucrative world of lobbying has never been open wider than in this legislative session.

*Former Republican Sen. Joe Leibham lost a September primary for a seat in Congress and resigned his Senate seat in December. Days later, he became a law firm’s chief lobbyist and is now registered on behalf of 19 clients that include General Motors, American Express, Aurora Health Care, Kwik Trip and SC Johnson.

*Bob Seitz, the former state Senate Republican aide who became spokesman and lobbyist for Gogebic Taconite, which is rethinking whether to apply for a permit to open a giant open-pit mine in northern Wisconsin, last week got a $112,000-a-year job at the utility-regulating Public Service Commission.

*Seitz will get the PSC executive assistant job that R.J. Pirlot gave up on Jan. 1. Pirlot now lobbies for 10 clients, including Wal-Mart, Wisconsin Manufacturers & Commerce and the Wisconsin Sheriffs and Deputy Sheriffs Association.

*Ryan Murray, a former deputy chief of staff to Gov. Scott Walker, resigned in November as deputy secretary of the quasi-public Wisconsin Economic Development Corp. to become a lobbyist. His seven clients include AT&T, Herzing University and Union Pacific Railroad.

Of the 519 registered lobbyists, about 20 are ex-legislators, according to Government Accountability Board records. Leibham and Kedzie are just the latest ones through the revolving door; one ex-Assembly member now lobbying, John Alberts, served from 1969-73.

Ex-legislators who now lobby are overwhelmingly Republican. Here’s why: Republicans control the Assembly, 63-36, and will control the Senate, 19-14, when a Senate vacancy is filled in April.

The demand for D-or-R lobbyists ebbs and flows, depending on which parties control the Legislature and governor’s office. When Democrats ran the Capitol in the 2009-10 session, for example, some Republican lobbyists found themselves unemployed.

Besides the ex-legislators, the lobbying corps includes dozens of former Capitol senior aides to former governors and one-time legislative leaders. Many of them started out answering phones and running errands for elected officials in their 20s, learned how the Capitol works, developed expertise in emerging issues and now get six-figure salaries as lobbyists.

And, many of the GOP lobbyists personally mentored or have worked on policy and political issues with Walker, who served in the Assembly from 1993-2001.

The revolving door between Capitol officials and lobbying was opened in 1977, when legislators exempted themselves, their aides and officers from a conflict-of-interest law. That law prohibits ex-state employees from meeting with or trying to influence their former co-workers for a year after they leave state service. But it also specifically exempted “officers, members, and employees of the legislature and its service agencies,” according to a GAB summary.

Often, ex-legislators get paid to lobby on behalf of special-interest causes they, or their party, opposed when they were elected officials. For example, former Assembly Speaker Gard and former Republican State Sen. Bob Welch now lobby for groups trying to kill a right-to-work law that is a priority of GOP Senate Majority Leader Scott Fitzgerald and many Republican lawmakers.

If they can’t kill a right-to-work bill, Gard and Welch are expected to try and push for an exemption from it for their union client, Operating Engineers Local 139. Conservative leaders accuse Gard and Welch of “selling out” their one-time GOP fellow legislators, and Republican Party principles, to cash lobbyist checks.

How close can the relationship be between legislators and lobbyists? A story: Almost 10 years ago, a controversial veteran Republican legislator announced that he would not seek-re-election, which unofficially invited every lobbyist he had ever worked with to try and find him a new job.

One of the most powerful lobbyists then (who no longer works the Capitol) squirmed about the situation. The retiring legislator had helped this lobbyist get some bills passed, so the lobbyist owed him. But this particular legislator was simply too controversial. He “will be hard to place,” the lobbyist sighed, and the retiring legislator never quite made it through the revolving door. It was a memorable exception to business as usual in the state Capitol.

3 thoughts on “The State of Politics: Legislators Move to Become Lobbyists”