Its new headquarters in the Brewery is a MANDI finalist and its staff and students work with city Health Department.

By Edgar Mendez, Milwaukee Neighborhood News Service - Feb 13th, 2015 10:43 am
Get a daily rundown of the top stories on Urban Milwaukee 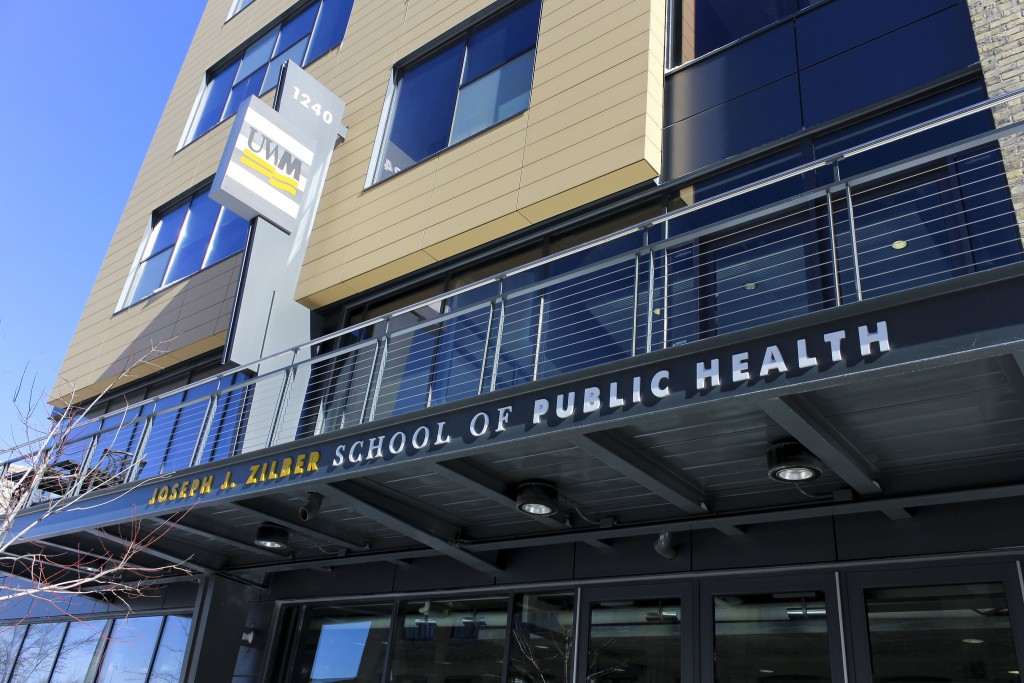 The UW-Milwaukee’s Zilber School of Public Health, 1240 N. 10th St., is located in the Brewery, a complex near downtown that once housed the sprawling Pabst Brewing complex. (Photo by Alhaji Camara)

“I know that we’re not going to move the needle overnight,” said Paine, who is the program manager for the Lifecourse Initiative for Healthy Families (LIHF), a program designed to improve birth outcomes for African Americans in Milwaukee, Racine, Kenosha and Beloit. “It’s going to take a generation.”

At least now, said Paine, who grew up on Milwaukee’s North Side, “We (African Americans) have a seat at the table, a voice.”

When Magda Peck, a nationally renowned expert in the public health field, became the school’s founding dean in 2012, she envisioned helping to shape students such as Paine who would work to solve problems that have been plaguing Milwaukee and other poor communities for generations.

Peck considers Milwaukee the sentinel city of America; a place to confront these problems head on. “It is the most important community because it has the greatest assets and the greatest problems,” Peck said.

Prior to opening, the school established a strong partnership with the Milwaukee Health Department (MHD), which has an office on campus.

The health department provides students with a real-world learning laboratory and in turn, it gets field support for its workforce, including graduate students and professors who help analyze data, Swain said.

MHD takes that data and uses it to solve local problems, said Jessica Gathirimu, director of family and community health services at the health department.

Professors and students at Zilber are working on research projects that include examining the role of young fathers during a partner’s pregnancy and looking at the best way to help people make healthy food choices.

These projects are relevant anywhere, but in Milwaukee, where many social problems border on an epidemic, studies such as these are imperative, explained Peck.

Many public health students are regularly out in the community, confronting the problems at ground zero. “They’re brave risk-takers,” Peck said.

Partnerships with the health department and area nonprofits have resulted in 27 student field placements between 2012 and 2014. Student projects have included helping write parenting books for at-risk families and evaluating the Victory Garden’s Blitz Initiative, in which volunteers plant hundreds of raised-bed gardens in yards, schools, community centers and other locations.

Second-year doctoral student Megan Meyer, originally from Minneapolis, described the school as both a hub for learning and a tool for integrating into the community.

She arrived in town having worked on access to dental care in Minnesota, and saw the school as an opportunity to expand upon her skills. “I wanted to take a look at how we create services that support patients who are low-income or have other barriers. This institution allows me to look at these questions,” Meyer said.

So far, she’s worked on infant mortality and community engagement projects, and hopes to find an organizational fit in Milwaukee upon completing her doctorate.

Perhaps as important as building and training a public health workforce in Milwaukee is keeping students in the region after graduation, said Peck.

So far, the majority of the students who’ve come through the door have stayed in the area to work, said Nicole Schanen, senior communications executive at the school.

While the school prepares students to work anywhere in the country or the world, the relationships they build with local organizations make them more likely to stay in the city to work, explained Peck.

Many of those relationships are initiated at Zilber, which serves as a public meeting space for local organizations. The building hosts hundreds of events each year, serving numerous diverse initiatives addressing health disparities in the city, Peck said.

Those connections then extend out to the community, said Peck, which will lead to “changes that we can see and taste, in one generation.”

For Paine, who is responsible for community organizing, engagement and identifying best practices for the Lifecourse initiative, it’s also about connections and relationships. “I’m connecting the dots back to infant mortality,” she explained.

And she’s proud to be doing it in neighborhoods similar to the one she grew up in. “I’m a liaison for my community and an informant to my colleagues,” Paine said.