The deteriorating condition of a foreclosed property at 1231 S. 24th St. in Layton Boulevard West has neighbors upset about the eyesore on their block.

A neighbor who lives next door to the property emphasized the overall cleanliness of her street. She said all of the properties are relatively well maintained, except for the vacant 1.5-story house.

“It’s frustrating because I feel like aside from this house, we have a pretty nice block,” the neighbor said.

The neighbor explained she has complained to the city on several occasions, to no avail. She’s claimed to see rodents crawling around the property and occasionally invading her backyard. She added that a weed on the front lawn of the property has now grown to be as tall as the home.

City records show three service requests and one violation for the property. The first service request came in June 2010. It stated the porch floors were decaying and the house needed to be repainted. No violations were found upon inspection. 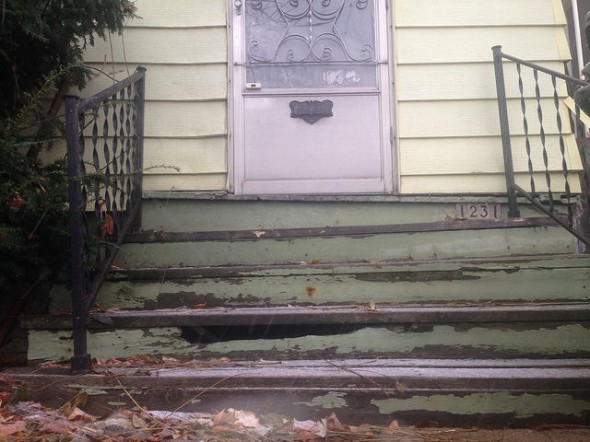 The stairs leading up to 1231 S. 24th street are crooked, chipping and cracked.

The second work request occurred three years later and led to the lone violation. The 2013 complaint noted that garbage was piling up in Baxter’s backyard and mentioned containers that collected rainwater and attracted mosquitoes. Two days later, inspectors removed the trash and filed a formal violation against Baxter.

The third and final request was filed less than six months later in November 2013. The report confirms Baxter’s departure from the home and stated the property was vacant upon inspection.

Baxter also owns a second property four blocks south of his family home. He owes more than $2,100 in delinquent taxes. The property received one formal service request in January 2012 for garbage in the backyard. He was issued two violations between January 2011 and December 2012.

The first violation was described as a “nuisance vehicle” on the property. The second required Baxter to remove and dispose of debris and junk in his backyard, just 11 months after the city inspected the property.

In each instance at Baxter’s properties, the city responded to the request within a week. Karen Taylor, who handles tax foreclosures for the Department of City Development, said the city tries to respond to complaints and requests within 10 days.

She added that even if complaints are not being filed, the city is still routinely perusing blocks and keeping track of upkeep on foreclosed properties. 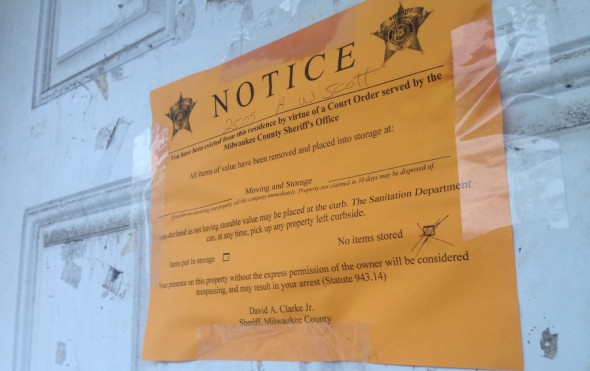 An eviction notice is taped to the door of 2509 W. Scott St. Photo courtesy of Milwaukee Neighborhood News.

“We have listing brokers who do a weekly drive-by to see the condition and report to us any issues we may need to address,” Taylor said. “We have a real estate staff member who goes out to check properties. As complaints come in, if the complaint isn’t cleared we have to go out and take a look at it. Staff members are always out checking on properties. If there’s a problem with a property, they will let us know.”

The city has had its hands full keeping up with property maintenance over the past five years. The foreclosure crisis struck Milwaukee as hard as any city in the country in 2008.

The city generally begins tax foreclosure after three years of non-payment of taxes. The city engages in different collection strategies in the interim, but there are several factors that can impact the timing of the process.

According to Aaron Szopinski, director of housing policy for the city, about $5 billion in residential home value was lost in 2009 due to foreclosures. Szopinski said of the 2,400 foreclosed homes in the city, 1,200 are owned by the city, 300 houses have been re-sold and 272 houses have been demolished. That leaves just over 600 homes the city is responsible for maintaining.

Charlotte John-Gomez, executive director of Layton Boulevard West Neighbors, said there are 48 foreclosed properties in the neighborhood. She said LBWN encourages neighbors to maintain a neglected property’s appearance. The association can also help them contact the bank that owns a foreclosed property on their block.

More than $2 million has been invested in rehabbing 24 foreclosed homes in Layton Boulevard West, according to Sam Leichtling, program director for the Neighborhood Improvement Development Corporation. He explained that NIDC has a strong working relationship with the neighborhood.

“We’ve had a long history of partnering with [LBWN] to make funds available to existing home owners to rehabilitate their homes. The foreclosure crisis came along and started to put some of those investments at risk. We made a conscious decision to work with LBWN to protect those investments,” Leichtling said.

Leichtling said Layton Boulevard West is in a better situation than some of the other city neighborhoods.

“The foreclosure process has not impacted every neighborhood equally,” Leichtling said. “Layton Boulevard West may have a high number of foreclosed homes at any given time, but because there is a really strong real estate market there, a lot of those homes get purchased and don’t sit for as long.”

Layton Boulevard West’s Turnkey Renovation program reduces the number of dilapidated houses by rehabbing them and bringing in new homeowners. The program, created in 2008, has rehabbed 15 properties.

John-Gomez said she thinks the city is doing a good job of maintaining properties with the resources it has, but banks have a responsibility to keep up their properties as well. She said the only way things can get better is collaboration among the neighbors, the city and the banks.

“I think a lot of it is relationship cultivation with the banks,” John-Gomez said. “I also think just being a partner with the city and doing a team effort is a good thing. We have to work together in order to improve upon the property.”

In some cases, John-Gomez said the only way neighbors can make any progress on a property is to dig in and fix it on their own.

She added that LBWN tells neighbors that if a house on the block has really high grass, they should consider cutting the lawn themselves. John-Gomez said the organization encourages neighbors to improve the appearance of the property on their own, rather than waiting for someone else to take care of it.

“Zombie” properties also create a maintenance issue. Zombies are homes that owners move out of before the foreclosure process is finished, but the lender never actually takes ownership. These vacant properties are susceptible to vandalism and criminal activities.

“If it’s our property we should be doing a good job because we’ve allocated money to contractors on a more regular basis to take care of them,” Murphy said. “Generally with the zombie properties, you’ve got these guys that don’t do anything and that’s where we’ve run into problems.”

Baxter’s neighbor said she has reached her breaking point and wants to see the property cleaned up.

“I don’t care who takes care of it. I just want something to be done so that my home isn’t affected by his negligence.”

John-Gomez said the most efficient way to solve the problem is to sell foreclosed homes immediately.

“We can’t just let a foreclosure sit there,” John-Gomez said. “Once it’s foreclosed and on the market, the neighborhood has a responsibility to try to help sell that house.”