A bar since 1895, with quite a checkered history, it will close on January 17.

The bar at Treats. Photo by Michael Horne.

About 120 years of tavern history will come to an end when Treats, 2221 N. Humboldt Ave., just south of North Ave., closes it doors for the last time. The tavern’s owner, Mark Smukalla, died at 56 in April, 2014, and his daughter Erica C. Dennis, in whose name the tavern is licensed, has elected to not renew. The tavern, and its license, will expire on January 17th, after 22 years under the current ownership.

Like the Red Lion, located downstream and across the river, the building that houses Treats was a pre-prohibition tavern owned and operated by the Gettelman Brewing Company, which carved a niche for itself in the lower stratum of the working class retail drinking market. Gettelman would frequently find older buildings near factories and fix them up as taverns.

The underpinning was the first of many the building was to undergo — same for the addition. In 1922, during prohibition, Gettelman “altered a barn to a garage,” according to city records.

“Do not proceed with chimney,” the city inspector cautioned Prinz, until he could “explain the construction of same.” The construction was explained, and the chimney was built.

In 1934, after the end of prohibition, with bars once again legal, Anna Prinz went to City Hall to take out an occupancy permit for the place, listing its use as “Tavern.” Under former use, as we have so often seen, she wrote, “Tavern.”

In 1945 the modern history of the building began when J. Puterno took out a permit to alter the front door to swing out, and added two 27 inch by 51 inch windows to the facade.

John Nichols bought the building and the business by 1958, and had a projecting Blatz sign added to the facade on busy N. Humboldt Ave. in 1960. By then it was nearly time to underpin the building once again, and that deed was done in 1962, with 12 inch concrete block, and “struct. members to be reinforced as necessary,” according to the inspector.

In 1963 the assessor was pleased to see that the owners had “straightened leaning building and replaced some joints.” In 1965 Nichols added aluminum siding to the lower half of the structure, and “soft goods siding” to the upper half, giving the building more or less the rather unremarkable exterior it sports today.

A 4 ft. x. 14 ft. addition was made to the south side of the tavern in 1972, possibly to accommodate the pool table that sits there today, affording unobstructed shots for the players. That’s the sort of largesse one would expect in a Pabst bar, not a Gettelman bar.

In 1976 the business was owned by a guy named Dick Middleman, and then leased to Mark Guse, who installed an “Andeker The Beer Supreme” sign to replace the Blatz sign, and renaming the place the “Hillside Tap,” in recognition of what the building kept falling off of. (In fact, as any Riverwest bicyclist can tell you, the grade of the hill between E. Garfield St. and E. North Ave. at this location is among the steepest in town.)

By 1981, the tavern business and building along with fixtures (except TV and stereo) were listed for sale for $125,000. In 1983, an “outdoor beer garden,” still in use, was added to the west of the property, where the old barn and garage had been. At that time outdoor beer gardens were an extreme rarity in this city.

In 1985 Christine Ulatowski operated the place, and by 1986 it was “Spanky’s,” then changing to “McCluskey’s” in 1987, with a Pabst sign replacing the Andeker. William and Michael McCluskey operated the place under the family name, and by 1990, it was the awesomely named “Nuclear Cafe,” featuring bands like “Windowpane.”

Tom Fellinger ran it for awhile as Tricks, before it became Treats in 1993, thus completing a Halloween-ish theme of sorts.

It should be remembered that for most of its life, the tavern faced a massive rail switching and coal yard where the Pick ‘n Save is now located, and was hardly considered a destination. The area downstream was also desolate, and Riverwest, to the north, was not doing as well as now, and somewhat isolated from this location anyway. To the east, the long North Avenue bridge (much longer and higher than the current one, sped traffic on its way.)

With nobody paying much attention, or prepared to complain, this place did have somewhat of a reputation for occasional rowdiness and illicit activity during those loose years when a “Windowpane” was not something you would look through in the most literal sense of the word. It also drew a mixed-race crowd long before such a thing was commonplace in the vicinity. And, unless your wife was headed down to the coal yard or the railroad tracks, there was a chance you could meet your girlfriend (or one for rent) without being detected here.

All along, the place has operated under a “continuous legal non-conforming occupancy,” which is legalese for “Grandfather Clause.”

Inside today the various remodelings are evident through such details as flooring, joists and other indica. That four-foot addition to the south has really made the pool table a great center of attention, and you can’t miss its bright red felt. To the east of the pool table are 5 gaming machines, and elsewhere in the front room is an electronic dart board.

An upstairs apartment used to have a door that led directly to the street, but today access is through the tavern, and the apartment’s kitchen was removed in 1992 or so. It’s just a hangout now for the owner.

The men’s room has a sloping tile floor that must date to 1945, and somehow missed all of the underpinning going on over the decades. It also has a tiny little corner sink such as one might find on a train.

The most remarkable feature of the tavern is the bar itself. Its counter is painted mahogany, laid in big sheets, and original to the establishment. Behind it the back bar is oak with elaborate floral appliques that fortunately bears its original 1895-1903 surface. Below are original cooler doors, though the compressor has probably been replaced over the years. Many liquor bottles are on the bar, reflected in the curved, beveled mirror, which has also managed to survive a dozen decades. The supply of bottles will likely diminish as the few remaining days of the tavern’s business likewise dwindle. Who knows what shot will be the last to be poured here? Make mine a cognac.

Painting of Mark Smukalla, attired, as was his custom, in women’s clothing. Photo taken by Michael Horne.

A back room has a cathedral ceiling, and a few jazz photographs, including those of Dizzy Gillespie and John Coltrane. More remarkable is the painting of Mark Smukalla, attired, as was his custom, in women’s clothing.

A few thirsty houseplants appear to miss their former custodian, and appear ready to join him in the hereafter if not promptly watered. A stage awaits a band. I wonder if Windowpane is still together, or ready for a reunion?

Meanwhile, on a recent visit in below-zero weather, the outdoor patio was not much of a draw, but a few cigarette butts attest to its functionality in any season for the tobacco-dependent. Come spring, and summer, it could be a pleasant place of respite, as it has been for years. (The only better-landscaped bar patios you’ll find in town are all gay ones.) But this would first require somebody to get a license for the place, which might take some doing.

Mark Smukalla left many debts in his wake, including nearly $100,000 in state tax warrants. Although this alone would not complicate a future owner’s plans, the real estate itself might, since the property is some $8,209.15 in arrears in delinquent property taxes collected by the city. These would have to be cleared in all likelihood before the city would consider a new license application. 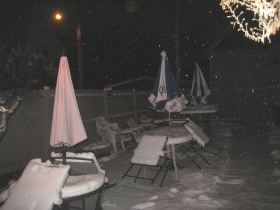 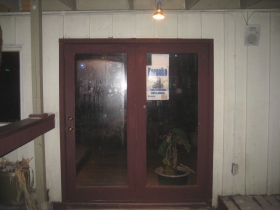 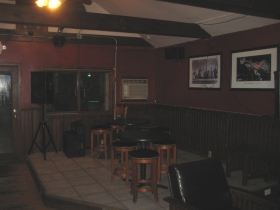 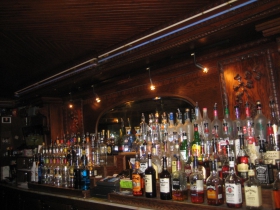 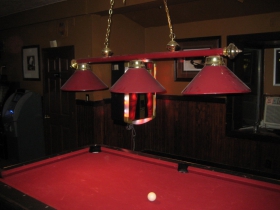 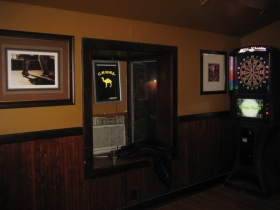