Revamped Park Will Upgrade North Side

Improvements in Moody Park will improve quality of life in Amani neighborhood. 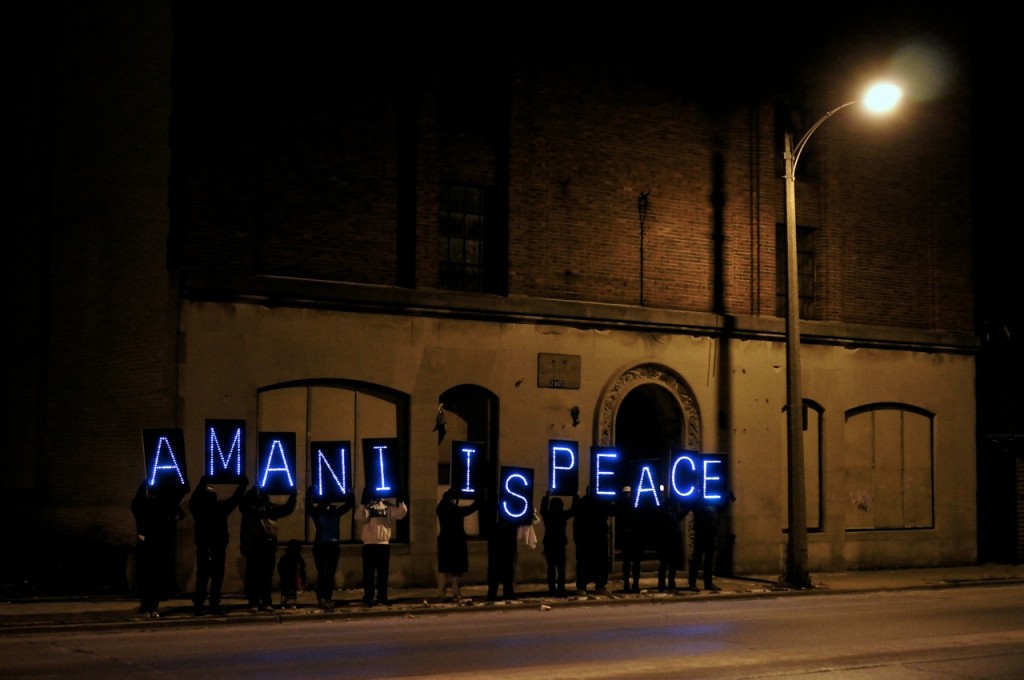 Amani United collaborated with the Overpass Light Brigade to produce a message at a recent candlelight vigil in the neighborhood. (Photo by Adam Carr)

Long-neglected Calvin Moody Park, located in the Amani neighborhood, is finally getting a makeover. The $2 million project, which includes a 3,000-square-foot community center, walking paths, lit basketball courts and a splash pad, broke ground in August and is expected to be completed next fall.

The park is one of many developments aimed at improving the quality of life for residents in the Amani neighborhood, located between 35th St. on the west and 15th St. on the east and Capitol Dr. on the north and North Ave. on the south. Tom Schneider, executive director of the COA Goldin Center, said Amani was once “the single most distressed neighborhood in the city of Milwaukee.”

The park project is being funded with $5 million originally allocated to rebuild Moody Pool, boarded up in 2002 and demolished last year. The remaining funds are being used to rehab other central-city parks including Lindsay and Lindbergh.

A combination of increased engagement by resident associations, non-profits such as the Dominican Center for Women and private sector organizations including the Children’s Hospital of Wisconsin, along with an influx of city and federal funding, is resulting in a brighter outlook for Amani. Local organizers said they hope it will eventually be known for new development rather than violence.

Alderman Russell Stamper (15th District) grew up in Amani and acknowledges that crime remains a problem in the area and pleads for more resources to prevent rather than react to crime. Still, Stamper said, the area is becoming safer as more is invested in housing programs. “We have programs now that are helping people get loans to buy homes, but we still need more jobs for the community,” Stamper said.   Amani is an example of how a Building Neighborhood Capacities Program (BNCP) grant, which the neighborhood received in 2012, is supposed to work, said Susan Lloyd, executive director of the Zilber Family Foundation, which also funds programming in the area. The key, Lloyd said, is for people, “who live in these communities and appreciate them, to be in the best position to decide what will happen in the neighborhood.” Amani’s BNCP grant was recently extended another 18 months.

Other recent developments include a new family clinic at the Goldin Center, a slew of housing development programs, as well as an accredited early childhood education facility and job training project that are in the works.

But first, residents look forward to reclaiming the eyesore and crime hub that had become Moody Park and its pool. Ground was broken at the park in late August and the project should be complete by the fall. It almost didn’t happen, said Brenda Hart, chair of the Friends of Moody Park.

When rumors began to swirl in August that the groundbreaking would be delayed, Hart and other residents of Amani voiced their displeasure, and ground was broken as scheduled, Hart said. “We’ve become the kind of neighborhood that stands up and fights for change,” she added.

The Milwaukee County Department of Parks and Amani residents have worked hand in hand on the project. Hart hopes that the rebirth of the park will help people let go of their fears about the neighborhood, and help to turn the page on Amani’s darker days.

“The main thing I want is for people to not be afraid to come to the park; Amani is a loving community and one that we really care about,” Hart said.