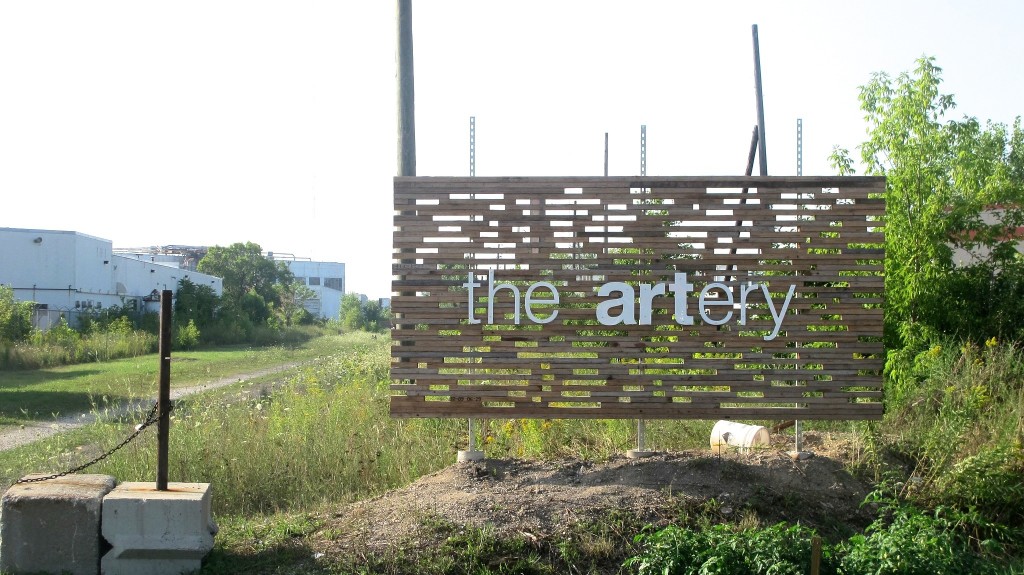 One of four entrances to the Artery, near Keefe Avenue and Richards Street in the Harambee neighborhood. (Photo by Andrea Waxman)

KK River Neighborhoods and Capitol Heights will be funded in 2015.

The Greater Milwaukee Foundation (GMF) provides financial and technical support to the grantees,” explained Darlene Russell, senior program officer at the foundation. The city provides up to a $10,000 matching grant per project, as well.

Healthy Neighborhoods Initiative organizations also have the opportunity for professional development and training.

Harambee and Riverwest, working with lead agency Riverworks Development Corporation plan to engage residents from both neighborhoods in a dialog about what they think works well in each neighborhood, said Executive Director Darryl Johnson. 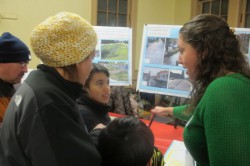 With the help of GMF, City of Milwaukee, LISC Milwaukee and Riverworks Business Improvement Districts #25 and #36, the community will tackle a number of difficult issues including strengthening economic development using art and culture, creating opportunities for employment, filling vacant spaces with entrepreneurs, increasing home ownership rates, reducing crime, marketing houses and building a sense of community between Riverwest and Harambee, Johnson said.Johnson noted that the community is extending the Beerline Recreational Trail and intends to add activities all along the Artery to encourage engagement with the public space. On a portion of the Beerline Trail in Riverwest near Café Corazon, residents built an ice skating rink last year. “It’s open to anybody in the neighborhood to come out and ice skate,” Johnson said.

One new aspect of the HNI is an emphasis on smaller, more concentrated areas within the neighborhoods according to Iris Gonzalez, environmental coordinator for the Sixteenth Street Community Health Centers, lead agency for the Kinnickinnic River Neighborhoods.

Gonzalez expects that the community will build on the work it has been doing to increase green infrastructure and manage storm water to improve and revitalize Pulaski Park.

The Old North Milwaukee neighborhood, working with lead agency Agape Community Center, will focus its HNI work on the blocks between Silver Spring Drive and Florist Avenue and 35th and 38th streets, according to Al Luzi, director of development at Agape.

The neighborhood hopes to develop a city-owned vacant lot there into a “neighborhood engagement zone,” hopefully in a green space, Luzi said. “The residents will plan how best to use it. In our neighborhood, having green space makes sense because we are a densely urbanized area,” he said.

According to Sam Leichtling, program director of the city’s Neighborhood Improvement Development Corp. (NIDC), the GMF investment “shows the confidence they have in these neighborhoods and the partners in these neighborhoods to implement a vision for strengthening [them], engaging residents, improving the appearance of the properties, supporting ownership and increasing property values.”

Leichtling noted that all of those goals align with the city’s housing strategy and the mayor’s Strong Neighborhoods Plan. “We’re making significant investments in the housing stock and we continue to support improvement projects in those (neighborhoods) also,” he said.

HNI, which launched in 2006 in four neighborhoods, has always targeted “middle market” neighborhoods, according to Russell. It aims to help residents work together to improve neighborhood stability by investing in the appearance of their homes and public spaces, thus building confidence in the neighborhood. The program’s approach builds on neighborhood assets rather than focusing on perceived problems. Each Healthy Neighborhood designs its own projects and programs.

“The City of Milwaukee Neighborhood Improvement Development Corporation has been a partner with the foundation since the inception (of HNI) and we have been working to more closely align our strategies,” Russell said. She noted that this year middle-market neighborhoods were identified using market value analysis data. Previously, neighborhoods self-identified as middle market.

Russell said the initiative has “worked closely with UWM to gather quarterly real estate data for the neighborhoods in order to build their capacity and provide needed data to help inform their work.”

Three neighborhoods whose grants are ending will not be renewed. The Johnsons Park and Martin Drive neighborhoods did not apply for new grants and Enderis Park was not eligible because it has strong market value and is no longer considered a “tipping point” neighborhood, Russell said.