A stage adaptation of It’s a Wonderful Life, set in a radio studio, is all about the right voices and sound effects.

Not much good can be said for the year 2009. The country was in the throes of the Great Recession. Banks failed. People were forced out of their homes. Entire communities fell into crisis. But even in the midst of despair, Willie Repoley found a story of hope.

Repoley, Producing Artistic Director of Immediate Theatre Project, wanted to revive Frank Capra’s classic film, It’s A Wonderful Life. Other companies developed versions that made the story into a radio play, but he didn’t think they really did the story justice.

“The first time I looked at one of those scripts, I thought it (had) this thick layer of nostalgia which obscured the story,” Repoley says.

He decided to take advantage of the radio studio setting and create an adaptation that told the story with more depth. The only way to do that? Write a play within a play. It’s A Wonderful Life: Live from WVL Radio Theatre, opening Thursday at Vogel Hall, takes us back to Christmas Eve, 1945. The cast of four plays employees at a financially unstable radio station getting ready for its annual broadcast of It’s A Wonderful Life. When they learn all of the voice actors are stuck in a blizzard, the group must put on the show themselves using the limited resources they have. “Only by telling George Bailey’s story of salvation can they find their own,” Repoley says.

The play is purposely set in a time of financial volatility to reflect the state of many struggling businesses when Repoley started writing in 2009. But he made sure not to let the radio actors’ story trump George Bailey’s. The radio setting is a vehicle to make the original story more easily relatable. The actors interact with the audience at the top of the show to give them an emotional investment in the story.

Repoley played the voice actor who took on George Bailey’s lines in the first few years after the play premiered. He didn’t have much of a connection to the film when he first saw it as a kid (looking back, he realizes he could have no way of relating to a man who wants to commit suicide by jumping off a bridge because he feels like a failure). But in studying that role, he was able to bring authenticity to the emotions George was experiencing. Other actors did the same, and that translated to the audience.

Since the set is a radio booth, the actors have to make live sound effects using whatever objects the production team could find at hardware or thrift stores. It ultimately doesn’t matter what they use as long as audiences can understand the scene just by the sounds. A toolbox doubles as a cash register and a slamming car door. An eggplant is used when George gets punched in the face at Martini’s bar.

“We tried out a bunch of different vegetables at the grocery store. That one had the most consistently satisfying sound,” Repoley says. “We figured it would be a melon of some sort, but it just didn’t quite work out.”

Though the film is the driving force behind the play, this show is not simply the film script played out on a stage. It aims to honor the classic film in a new way. The cast occasionally checks the movie for ideas, but their goal is not to become Jimmy Stewart, Donna Reed or Lionel Barrymore. Repoley says they couldn’t recreate the movie if they wanted to. No one can tamper with perfection.

“If you wanna watch the movie, watch the movie,” he says. “There’s no other experience than that. But what we can do is make it fresh and alive in ways that can only happen in theater.” 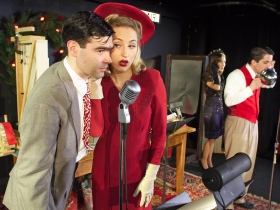 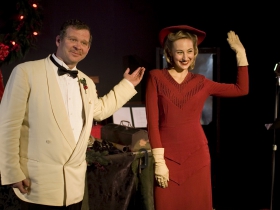 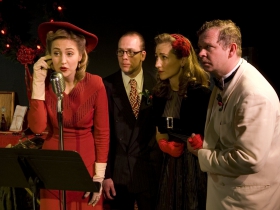 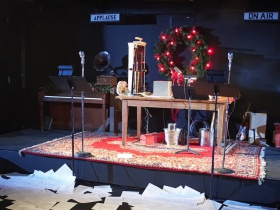 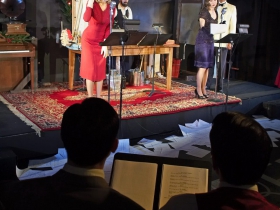 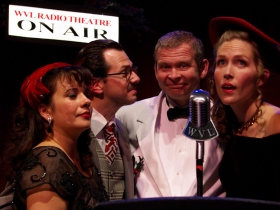 Instead of stories by the fireplace, why not experience storytelling through gravity-defying acrobatics and dazzling costumes? After 11 years, “Varekai” is emerging from underneath the Cirque Du Soleil Big Top as the company’s newest arena show. It tells the story of a curious world at the summit of a volcano, presumably inhabited by gymnasts of extreme flexibility and artistry.