Beinbetween looks to enliven the bridge between Riverwest and Brady Street neighborhoods.

By Caroline Roers, Milwaukee Neighborhood News Service - Nov 21st, 2014 10:06 am
Get a daily rundown of the top stories on Urban Milwaukee 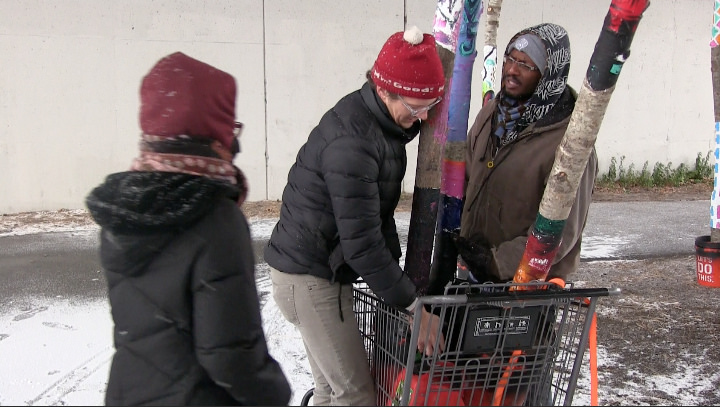 Under the east side of the Holton Viaduct, a circular chandelier of colorful sticks hangs from the underside of the bridge. The light in the center of the chandelier casts a forest-pattern shadow on the ground of Swing Park, at the intersection of Water and Pearson streets.

On the opposite side of the river, eight 9-foot logs stick out from the ground. They are adorned with colorful patterns and topped with gold paint that reflects the sun.

These sculptures are part of an art project, Urban Alchemy, that is intended to bring together Riverwest and Harambee residents through public art making. The project was initiated by beintween, which calls itself a “social and spacial network” that works to build communities through art.

The organization partnered with artist Lily Yeh of Barefoot Artists to create the project, funded by Greater Milwaukee Foundation’s Mary L. Nohl Fund, ArtPlace America and the City of Milwaukee’s Neighborhood Improvement Development Corporation. Yeh, whom Urban Milwaukee has profiled, is an internationally-known artist and consultant who has helped groups  transform more than 120 lots — often in urban areas — into gardens and parks.

The Holton Viaduct “bridges two neighborhoods together who aren’t necessarily clicking right now. These sculptures give [the people] a reason to go from one side to the other,” said Vedale Hill, lead project artist. Hill co-owns Jazale’s Studio, 333 W. Brown Deer Road.

Families and artists painted the logs with symbols and patterns based on their family histories, and also painted sticks in multiple colors for the chandelier.

Artist Tia Richardson of Cosmic Butterfly Design decorated one of the logs. One of the sections was painted bright orange and yellow with splashes of black. The other was mostly white with the word “perseverance” written in the center.

“I used black for my father because it is a symbol of strength. For my mother, I wanted to show her journey through nursing school,” Richardson said.

The installation will remain under the Holton Viaduct for six months. “We really hope to bridge a gap that has existed for too long between these neighborhoods,” said Hill.