The Farwell Ave. restaurant has good food and warm ambiance with some Western touches.

When I reviewed Seoul Korean restaurant back in 2009, I lamented it was Milwaukee’s sole Korean restaurant. Not anymore – welcome, Stone Bowl Grill! I’m definitely a Korean-food junky with lots of Korean recipes in my Asian repertoire, and I’m really pleased to see this place open. But how’s the food?

My date and I started off by sharing a very traditional Korean dish called “pah-jeon” (pronounced “pah-June”) for $12.95. This is a large pancake cooked by pouring a flour-egg batter over a layer of whole or shredded scallions spread over a gridle. The dish also traditionally calls for Chinese chives, which are stronger in taste than the ones we’re used to in the West. It’s always served with a simple dipping sauce made of soy sauce and sweet rice wine, with a few toasted sesame seeds thrown in. I’ve never had this pancake before and it was fragrant, soft, light (but rich) and very savory. We polished that thing off in no time!

For her entrée, my companion – a pescatarian (she eats seafood, but not meat) – ordered the seafood Kal Guk Soo (“cal-gook-Sieux”) for $12.95, which is a piping-hot soup with Korean “knife-cut” noodles, seafood and vegetables in a delicate broth. There were plenty of mussels, clams, calamari, shrimp and, of all things, a tiny, whole octopus in this soup. That was a coincidence because we had just been talking about octopus. While my friend is pescatarian, she had never tried octopus before and was scared to try it. Before the dish arrived, I had been telling that octupus meat is firm, but tender, quite unlike its chewy cousin, calamari. It has a delicate flavor slightly reminiscent of the sea that absorbs the flavors around it. “Try it, you’ll like it!” I urged her. With great hesitation, she summoned the courage to nibble off a couple of its miniature tentacles. And guess what? She liked it! The shrimp were cooked in their shells with heads and tails on. So one must shift them to a side plate and peel and clean them before eating. I tried one and it had a very light shrimp taste, despite having been stewed in its shell. The mussels were briny and delicious.

Accompanying every Korean meal are little, vegetable side dishes. One of them is always kimchi which is pungent Napa cabbage pickled and aged in red chili pepper with a little bit of anchovy and, sometimes, daikon radish. I’ve found that different people either love it or hate it. I love it! It’s not necessarily always spicy, but Koreans (and I) prefer it quite spicy. Our meal accompaniments were served to us first with a bowl of rather insipid tofu and seaweed soup. They consisted of small bowls of Kimchi, lightly pickled daikon radish dice, fried tofu strips and, curiously, quite an every-day tasting little scoop of potato salad. They replenish these accompaniments throughout your meal at no charge, by the way. A nice touch.

As our meal progressed, it eventually became apparent to me that Stone Bowl is offering a subtle, Korean East-meets-West fusion in everything. The potato salad, for instance. And the hot ginseng tea we ordered was, oddly, served in a glass mug.

I discovered this place, by the way, while barreling down Farwell Avenue when I caught “Bimbimbop” on the restaurant’s sign out of the corner of my eye. Being a Korean-food junky, I knew immediately that meant we had a new Korean restaurant in town, even though I couldn’t catch the rest of the restaurant’s sign while flying past it.

Bimbimbop (pronounced “beem-beem-bahp”) is a traditional dish that was once fare of the royal Korean court. It’s a meticulously prepared dish with many components painstakingly arranged separately from one another inside a large bowl. Having eventually found its way out of the royal court and onto the tables of the masses in Korea, there are many variations of it. But, given that the word bimbimbop means “stirred rice,” the dish must contain rice. And not just any rice – it must be made like the Valencians in Spain make paella. The dish is cooked over high heat in order to toast the rice in the bottom of the bowl and make it crisp and golden.

Traditional components of bimbimbop include raw or cooked beef or other meat, julienned or shaved carrot, shredded seaweed, spinach, mushrooms and bean sprouts with either a raw or fried egg on top. Served in a red-hot stone bowl for $12.95, my bimbimbop came out sizzling like a plate of fajitas in a Mexican restaurant. It had a fried egg on top of cooked, ground beef, julienned carrot, daikon radish, julienned zucchini, mushrooms and corn kernels. Corn? That western vegetable is not a traditional component of this dish, so here we found another example of East meets West. I thoroughly messed it all up ASAP with my chopsticks and was amazed at how I could still differentiate between the numerous, delicious components in the bowl.

Stone Bowl has been around for a year now. It’s owned by the same people who operate the Japanese-themed restaurants Wasabi Sake Lounge in Brookfield and Kanpai in the Third Ward. Stone Bowl’s interior is romantically lit at night with Korean décor seasoned with odd, Western hints, like an artist’s wooden model-figurine displayed among Asian vases and small, Asian potted plants. The restaurant is cozy, warm and just what we needed on a cold night. The service was just as warm — and attentive.

Cozy and exotic, but with a little bit of Western kitsch, Stone Bowl deserves a try. 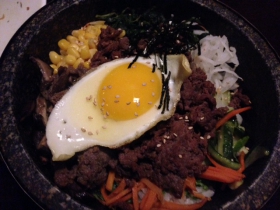 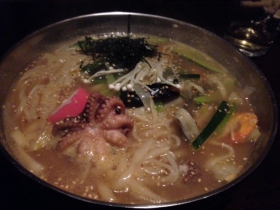 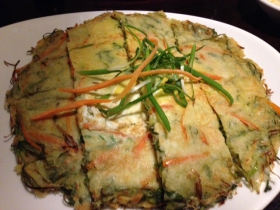 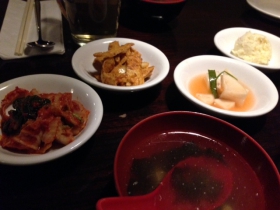 It is traditional in Korean cuisine to wrap cooked meat and vegetables with rice in lettuce leaves, much like making lettuce tacos, a dish called “ssam” (pronounced “sahm”). This is an easy recipe that requires no special trip to the Asian grocery store!

Preparation:
Combine the soy sauce, vinegar, scallion, sugar, ginger, 1½ teaspoons sesame oil, and red pepper in a bowl. Whisk well to blend. Reserve ¼ cup and set aside. Pour the rest into a plastic Ziploc bag. Add the skirt steak and seal. Marinate in the refrigerator, turning the bag occasionally, for at least 2 hours or overnight.

Remove steak from marinade; pat dry with paper towels. Heat a scant amount of sesame oil in a medium skillet or wok over high heat until almost smoking. Season the meat with salt and black pepper. Place in the skillet, reduce heat to medium-high. Cook until seared on the outside and rare to medium-rare on the inside, 2 to 3 minutes per side. Transfer to a platter, cover loosely with foil, and let rest 5 minutes. Cut into very thin slices, holding the knife at an angle and cutting against the grain. Toss with the reserved ¼ cup sauce in a bowl until well coated.

Mound the beef on individual serving plates. Serve with lettuce leaves on the side. Serve the rice in small bowls on the side, along with spicy, fermented cabbage kimchi, Korean bean sprouts and shredded carrot in other bowls.

With chopsticks, place beef slices in lettuce leaves, along with a little rice, kimchi and other vegetable components. Form into a small wrap-packet and shove the whole thing in your mouth, just like they do in Korea!