Lion King Is Still a Winner

Even if you’ve seen it before, it can still surprise with its power and creativity.

Jelani Remy as “Simba” and the ensemble in “He Lives in You” from THE LION KING National Tour. ©Disney. Photo Credit: Joan Marcus.

Exactly 17 years after it opened on Broadway (where it’s still running) and six years since the North American tour last visited Milwaukee, The Lion King has taken up residence at the Milwaukee Theatre through December 7 — a marvel of freshness despite such longevity and commercial familiarity.

After all this time it remains the platinum model of how Disney can take an animated hit and re-melt it for theatrical amazement – not by plugging its holes but by filling them with imagination.

I can argue that devotion to a melodramatic movie plot with lovable animated characters sometimes makes the story obvious — and that the demands of different road houses has simplified the set design and forced a bit more reliance on set pieces flying in from the wings (or crawling along the floor) and on acrobatic choreography (toward the end).

But criticizing side elements of Lion King is a waste of time. None can deny the nonstop fascination of the outing and the ability to combine craft, stately movement, satirical asides, suspended falls, touches of fresh humor and character gestures to move an audience. Nor the effort in shaping it perfectly for every road environment.

This is frankly the No. 1 stage attraction in the world, the best of the Disney machine that remakes movies into Broadway gold. It is now a $1 billion enterprise with multiple international companies in eight different languages. The pride of Disney is reflected in the show’s quality and in its casting, management, stage expertise — even the  peppy pit orchestra augmented by local professionals.

It stands alone as a different experience than the original film and yet cleverly echoes for drawing power the key anthropomorphic birds and animals – Zazu the hornbill, and the comic relief duo of Timon the meerkat (mongoose) and Pumbaa the warthog. Yet you will best remember the actors (respectively Drew Hirshfield, Nick Cordileone and Ben Lipitz)  manipulating these characters as puppeteers or in body suits while vocalizing them with amusing mimicry of the movie and its sequels.

This Africa is mystic and even Asian in its creation via mask, puppetry, marionettes, scrim, miniature projections and lighting. It is a newly delightful even on multiple viewings —  not just the birds flying on sticks in the balcony, the giraffes cavorting onstage, the human pumas, the gazelles wheeling in on rickshaws, the mastodon tramping down the aisle past surprised  patrons and the lion masks that with a tilt of the head create an image of menace for Mufasa and Scar or relax into a colorful headpiece.

Two decades ago, a brilliant, difficult director, mask and costume designer named Julie Taymor married her abilities with Disney money and crafted this vision, and it remains as vital and original as anything out there. I say that not always admiring Taymor, who has directed movies and other plays. Her passion for individuality sometimes gets in the way of the original work or overdoes a new piece. But this remains a perfect marriage.

The show’s commercial brilliance is reflected in how Disney management and Taymor keep changing elements around in fear of being too clever and remote. The movie music highlights by Elton John and Tim Rice are merely selective emotional anchors for the story. What drives the musical is expanding the African chants, which are far more theatrical. In fact this ensemble that hides itself within creatures in scene after scene gets to break out without disguise in the opening of the second act, turning “One by One” by South African musical great Lebo M into a stirring human highlight. It’s the touch that balances the artificial and invites us in.

You have to admire this company, many veterans of the Lion King companies. They are following a set series of inflections, staging and timing while hidden largely behind makeup and costumes that work against originality. Yet again and again they deliver energy and personality that stir the whole enterprise. Such skill even travels to the youngest cast members who are following instructions, notably Jordan A. Hall as Young Simba and Nya Cymone Carter as Young Nala. Still, without slight to other cast members, let’s single out Tshidi Manye as Rafiki, the South African who has invested powerful voice, comic clicks and a shake of the monkey tale to mesmerize Lion King audiences for more than a decade.

If you take the kids, and many will, they will immediately ask to watch the movie afterward. Let them. But sit with them and point out what on-stage creativity can add to the circle of life. 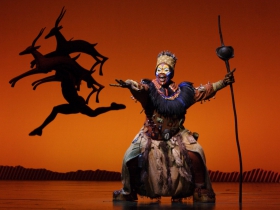 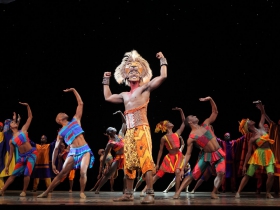 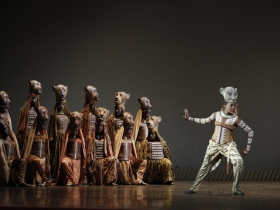 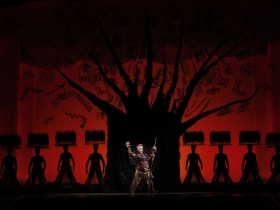 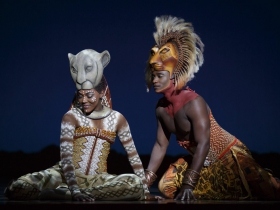 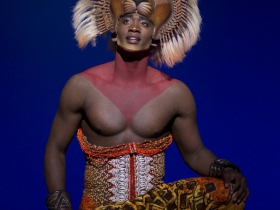