By Edgar Mendez, Milwaukee Neighborhood News Service - Sep 12th, 2014 09:19 am
Get a daily rundown of the top stories on Urban Milwaukee 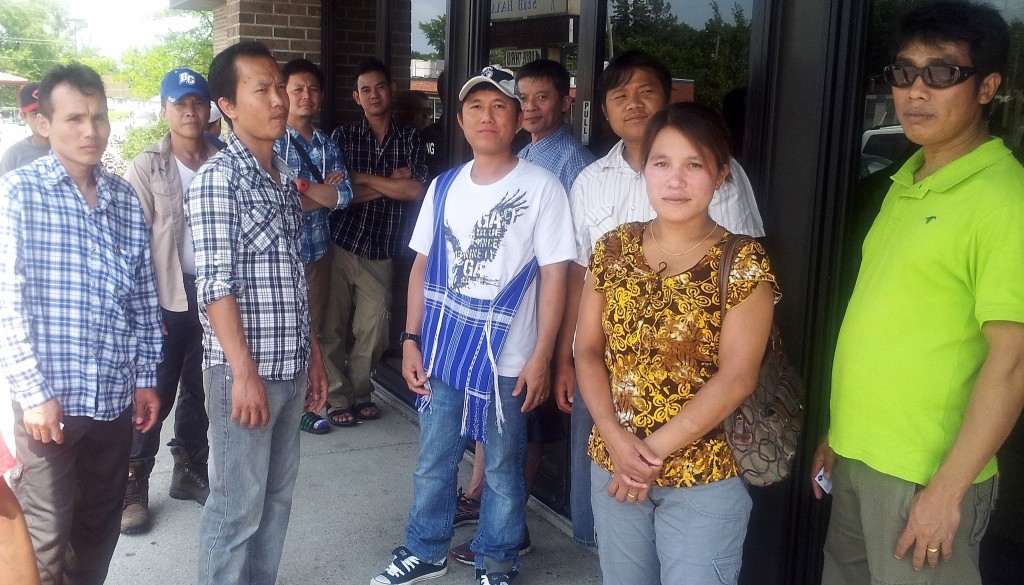 A group of Burmese workers waits outside the American Serb Hall, 5101 W. Oklahoma Ave., to get information about the Cargill beef slaughterhouse plant closing. (Photo by Edgar Mendez)

Laid-off Cargill workers have filled the 44 open jobs at the company’s Butler facility, leaving most of the 250 applicants for those positions out of luck. In total, 300 people applied to regain positions as well as their seniority at Cargill. Fifty were hired, six of whom accepted out-of-state positions, according to company spokesman Michael Martin.

Nearly 600 people at Cargill’s beef slaughterhouse plant, 1915 W. Canal St., lost their jobs in late July. The company, in collaboration with other employers, has hosted two job fairs, but has no more planned, Martin said.

One of the fairs was held in late August at MATC’s Milwaukee Enterprise Center South, 816 W. National Ave. Dozens of local companies including temp agencies, meat processors and spice companies, sent recruiters to both well-attended job fairs. No information is available on how many people were offered jobs.

Miguel Guzman, who worked for 13 years as an industrial maintenance mechanic at Cargill was also there, handing out more than 50 resumes.

“I was handing them (resumes) out like candy on Halloween,” Guzman said. 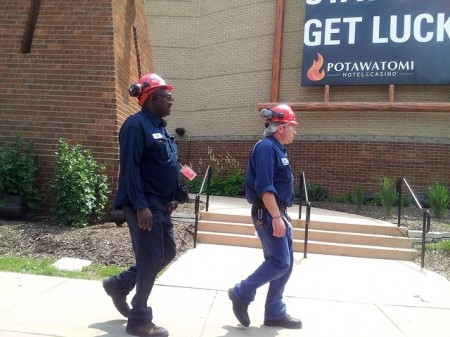 One of those leads panned out and he’ll be starting his new job as a mechanic at Patrick Cudahy next week.He said he did not even consider applying at another Cargill plant. He’d worked in the processing plant at Cargill, which is still open, but when maintenance crews from each plant were combined and pared down, he too lost his job.

“They told us our jobs were safe and two days later, slapped us in the face,” Guzman said.

Not since the closing of Kohl’s Food Store franchises in 2003 has there been such a wide-scale dislocation of workers in Milwaukee­, said Roger Hinkle, unemployment and training specialist for the HIRE Center of Milwaukee.

Nearly 600 workers, most from the central city, lost their jobs at Cargill’s slaughterhouse, said Hinkle, who has worked for the HIRE Center for 25 years.

The surge of suddenly unemployed workers created a number of unique challenges for the HIRE Center, which is a component of the Milwaukee Area Workforce Investment Board (MAWIB).

Already well equipped to handle the Spanish-speaking contingent of workers, the big challenge is providing services to the other refugee or immigrant populations, said Hinkle.

“They had a very large and diverse workforce there,” he added.

In response, the center is providing assistance in Burmese, Hmong and other languages.

About 300 of the displaced Cargill workers have already gone through the intake process at the HIRE Center and are currently being provided job training and crisis services that will continue for an unlimited amount of time, Hinkle said.

The fired workers received 60 days pay from the company, which is the minimum amount mandated by federal law. Former employees also received varying severance packages and are eligible to apply for unemployment benefits, according to Martin.

Guzman said the situations of his former co-workers vary from those looking forward to new careers to others who are concerned they won’t find work before their severance runs out.

“I consider myself blessed right now to have gotten a job doing the same thing, but I got lucky,” Guzman said.