Where Does All That Campaign Cash Go?

By Bill Lueders, Wisconsin Center for Investigative Journalism - Aug 13th, 2014 11:04 am
Get a daily rundown of the top stories on Urban Milwaukee

The ads. The yard signs. The emails. The fundraising letters. The campaign events. The ads.

Walker’s fundraising advantage is more than two-to-one, $13.1 million to Burke’s $6 million. His latest filing shows him with $7.1 million cash on hand, compared to Burke’s $1.7 million.

All this will be spent, and much more, given the three additional months of fundraising before the Nov. 4 election. This doesn’t include the many millions that will flow into the race from outside interest groups.

What will all of that money buy? Good question.

In the first seven months of this year, Walker spent $7 million to Burke’s $3.7 million. These outlays are itemized on the candidates’ reports to the state Government Accountability Board. Downloading this data and crunching the numbers yields some useful information.

For instance, $3.7 million of Walker’s spending total, or 53 percent, went to individuals and companies in other states. Burke, meanwhile, spent $3 million in other states, or 81 percent of her total; just over half ended up in Washington, D.C.

Burke’s largest expense category, at 39 percent, was for television ads. All of this went to the D.C.-based GMMB, whose website boasts: “We take on the tough races — the ones the pundits say can’t be won.” Previous clients include Barack Obama, Bill Clinton, Sens. Harry Reid and Barbara Boxer, and Nelson Mandela.

Walker spent slightly more than Burke on TV ads — about $1.5 million to her $1.4 million. But because Walker spent more overall, it accounted for just 22 percent of his total. All of Walker’s TV ad dollars went to Nonbox Inc. of Hales Corners, Wis., a consulting firm that makes ad buys. 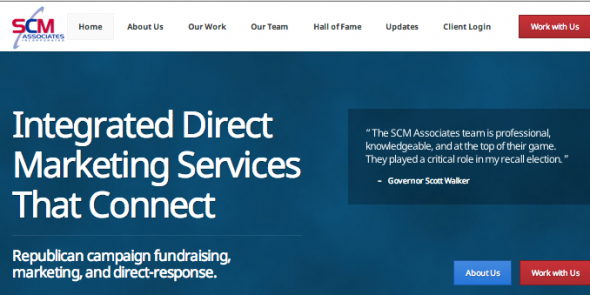 The SCM website says it raised “nearly $15 million” to help Walker in his recall election. Records show his campaign paid the company $6.5 million between early 2011 and the mid-2012 election. To make money, you have to spend it.

Burke has spent more than $600,000 on mailing services, much of it to two Maryland-based companies, ProList and Linemark.

Other findings: The Walker campaign reported spending $216,000 on fundraising expenses like food and beverages. On two occasions, it paid more than $4,000 for the boogie woogie stylings of Boogie and the Yo-Yoz, an Appleton-based band.

Burke’s fundraiser outlays totaled $3,422. Of this, the campaign spent a grand total of $52.75 on entertainment; this went, in one lump sum, to Full Compass Systems, a Verona company that rents audio/visual equipment.

Next to TV ads, the highest “media” expense category for both candidates was online advertising, with Walker spending $189,804 to Burke’s $145,424.

In the category of newspaper advertising, Walker’s campaign spent a grand total of nothing. Burke coughed up $813 for this cause, including four $2 purchases from the Wisconsin State Journal.

Every little bit counts — and is, on some ledger somewhere, counted.