Picketers Protest at South Side Walmart 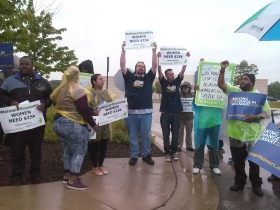 Picketers Protest at South Side Walmart. Photo by Tracey Pollock.

“What do we do when workers are under attack, stand up fight back!”

So chanted over two dozen workers and activists from the Our Walmart campaign, who protested yesterday at the Walmart store at 3355 S 27th Street to demand better wages, more hours and more respect. They formed a picket line at the entrance of the store, but were soon forced by management to move off the property and on to the nearby sidewalk, where the protestors used their signs and chants to alert incoming and outgoing shoppers to these issues.

Walmart workers were picketing in Milwaukee and across the country on the heels of a major victory — a decision by Walmart to offer more compassionate treatment of pregnant workers — and to highlight their demands before the upcoming Walmart shareholders meeting. The annual meeting is the single largest event for one of the world’s most profitable companies.

Benet Holmes, a Walmart worker from Chicago, says that when she was three and a half months pregnant, she asked her manager to take on lighter duties but was denied and was forced to continue lifting heavy boxes and pushing carts. The next day Holmes had a miscarriage while working.

She joined with other workers in the Our Walmart campaign the next day.

“I am fighting for pregnant women and we are speaking up against retaliation, demanding respect and are speaking out against the low wages – we want a living wages,” Holmes told Urban Milwaukee. “We’re not trying to fight against Walmart, we just want associates to live better. They [Walmart] are helping their customers live better and we want the little changes to help us live better too.”

But Our Walmart activists want more changes: they demanding to be treated with respect in the workplace, more hours (Walmart tries to limit the number of full-time workers), higher pay and an end to the illegal retaliation against workers who speak out for these issues.

“Living pay check to pay check, no one wants to do that. We were told that we were part of the family and we should be treated that way,” explained worker Angel Perkins as to why she was out in the rain protesting.

A recently-fired worker, Ikeen Williams, said he was fighting for other workers.

“I’m out here for my co-workers. I don’t believe that they need to live check by check. They might give us a couple of donuts for a reward if we go 90 days accident free. But we don’t want donuts, we want a couple of dollars pay raise.”

Williams said that while working at Walmart he was constantly harassed by management and often threatened with being fired. It was a huge stress to him, his wife and children, he noted.

Another protestor, Isaiah Bryant, talked about the problem of not being allowed to work full-time. Bryant  has been working at the South side location for over five months, having transferred from another store in Texas. He earns $8.70 an hour part time – management told him the store wasn’t profitable enough to give him with full time hours.

“I started part time, worked full time for three months and was supposed to be able to stay full time, but couldn’t get the hours. The managers told me Walmart is going broke and they can not afford to pay us and that’s why the hours aren’t available.” 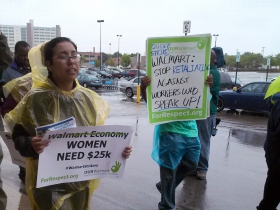 Picketers Protest at South Side Walmart. Photo by Tracey Pollock.

As the Huffington Post has reported, Walmart says the average wage for an hourly worker in its U.S. stores is $11.83 per hour. The company doesn’t say how large its part-time workforce is, only that a majority of its workers are full-time.

The Our Walmart campaign has recruited current and former associates from around the country. They work in coordination with Making Change at Walmart, a broad coalition of labor and economic justice groups anchored by the United Food and Commercial Workers. The Our Walmart Campaign has been ongoing for four years.

Photos from the Protest 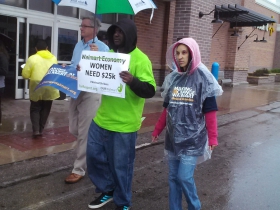 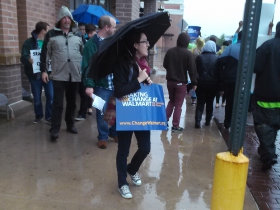 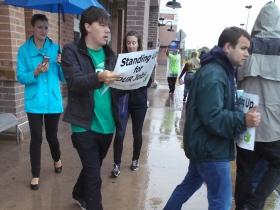 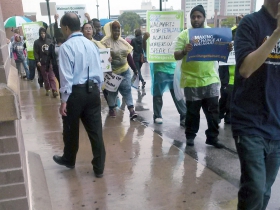 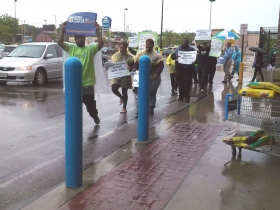