It's great news, but is there a dark cloud enveloping this silver lining?

By Dave Schlabowske, Bike Federation of Wisconsin - May 2nd, 2014 01:11 pm
Get a daily rundown of the top stories on Urban Milwaukee 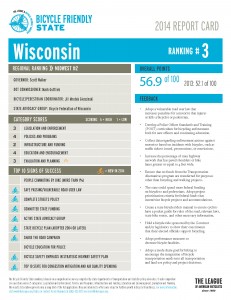 Click on image to open PDF of the 2014 report card.

Nobody was more surprised than the staff of the Wisconsin Bike Fed when we saw the announcement by the League of American Bicyclists that Wisconsin climbed to from #8 in 2012 to #3 in their 2013 rankings of Bicycle Friendly States. Don’t get me wrong, I know Wisconsin is a great state in which to ride a bike, but after our leaders in Madison cut funding for bicycling to the bone in the 2013/2015 Biennial Budget, and gutted our Vulnerable User Bill, we just assumed our ranking was going to continue the decline that began after we were ranked 2nd in 2010.

I got the news of our sudden rise last evening, and I was so shocked I called Andy Clarke, president of the League of American Bicyclists (LAB) around 9 PM his time in Washington, D.C. and interrupted his dinner (sorry Andy, after watching “House of Cards” I just assume everyone inside the beltway works until midnight). Andy was kind enough to put down his fork and give me some additional information behind the report card.

“If we just scored states on their bicycle spending, lots more would be ranked lower, but we take into consideration all the good work being done by advocacy groups, such as education and encouragement programs, the number of rides and cycling events in a state and the support from industry,” Clarke told me. “You guys at the Bike Fed can take some credit for the ranking because of all those programs you run, and frankly Jill Mrotek, your state Bike/Ped Coordinator, wrote one of the best applications in the country.” 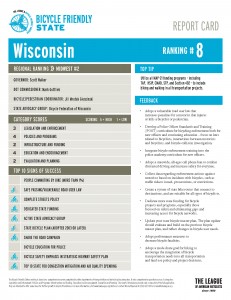 Click on image to open PDF of report card.

While that made me feel a little better about the report card (Good work Jill!), I still wanted to drill down to find out why our budgetary cuts didn’t have a bigger effect, so I called the LAB’s policy analyst Darren Flusche, and Nicole Wynands, their Bicycle Friendly State Program Manager to get the facts. They told me they don’t score states on their budget for the year, but instead on how much money each state obligates (commits to spend) in a given year for bicycling and walking programs (CMAQ, TE, Safe Routes, TAP, etc.) as reported to the Federal Highway Administration’s Fiscal Management Information System (FMIS).

According to the league’s analysis of the FMIS data, Wisconsin actually spent more money on bicycle and pedestrian projects in 2013 than we did in 2012. How can that be if we cut the budget? There is a long, wonky explanation, but the gist of it is that it often takes states and municipalities 2-4 years to spend the money they budgeted for any given year. So in this case, even though the 2013 budget was cut, because of that spending lag, Wisconsin spent more on bicycle projects that year than we did in 2012 because it took that long for them to get contracted.

Statisticians would probably advise us to consider regression towards the mean when we look to Wisconsin’s future rankings. We can’t know whether other states are going to rise or fall, but it seems our die has been cast when it comes to funding. That score is sure to fall in the next year or two based on WisDOT’s 2013/2015 Budget, unless you and I can convince our elected officials in Madison that bicycling is a great investment with a tremendous return in terms of adding to our state economy, and making our state a better place to visit, live, work and do business.

See below for a complete ranking of all the states. 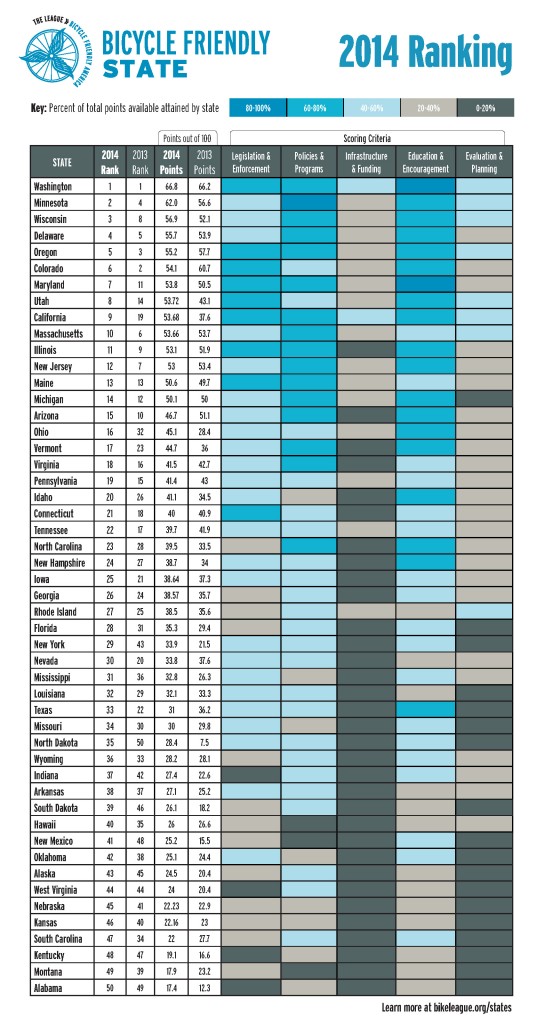