National charter school operator will open north side location to complement south side school in Milwaukee.

By Kelly Meyerhofer, Milwaukee Neighborhood News Service - Mar 11th, 2014 09:39 am
Get a daily rundown of the top stories on Urban Milwaukee 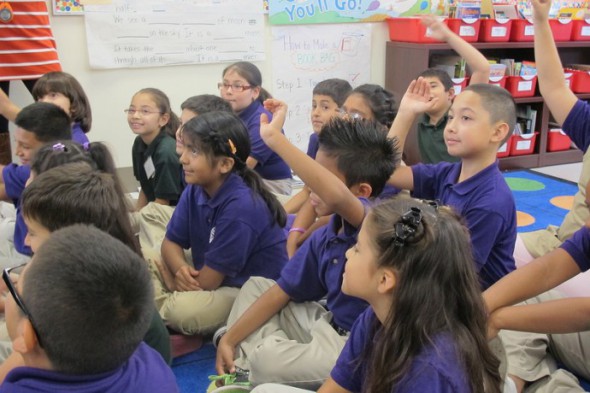 Rocketship Education, a national network of elementary charter schools serving primarily low-income students, expects to open its second school in Milwaukee in 2015, following recent approval by the national board of directors.

Before the first school, Rocketship Southside Community Prep, opened last fall, Milwaukee’s Common Council approved opening up to eight Rocketship charter schools by 2018. However, each school must also obtain individual approval. The council plans to vote on the second school this fall.

Enrollment at the K4 – 4th grade Rocketship school, at 3003 W. Cleveland Ave., is approximately 300, but this number is expected to grow to 500 when a fifth grade is added. The school did not meet its first-year enrollment goal of 485 students.

Katy Venskus, vice president of policy at Rocketship, said the second school does not yet have a location, though she confirmed it would be located on the North Side, and serve a predominately African-American population. The staff structure and learning goals will be different than in the South Side school, since fewer bilingual teachers will be needed and less time will be spent on language skills. 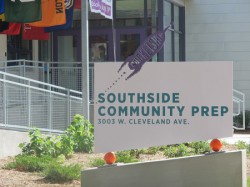 Seventy percent of students at Rocketship Southside Community Prep speak English as a second language, so part of a student’s day is spent one-on-one with a tutor.

“Rocketship is an ideal program for urban populations where students are typically behind grade level,” Venskus said.

However, Rocketship also serves students who are above their grade level.

“My son was doing the same type of work that his seventh-grade cousin was doing,” said Roberto Montemayor, parent of third grader Diego Montemayor. “At Rocketship, they start teaching addition and subtraction in kindergarten. This gives students an opportunity to achieve.”

Magda Vasquez worried a traditional school would bore her 4-year-old son Eliud with a slow learning pace, so she enrolled him at Rocketship. Vasquez praised the school’s “learning lab,” which uses technology to identify students’ needs and learning levels. Students are tested in both literacy and math using adaptive software, which then creates targeted lessons. Teachers review learning lab results weekly to tailor classroom instruction and assess how much one-on-one tutoring each student needs.

Another aspect of a Rocketship education that separates it from traditional schooling is the level of parental engagement, Venskus said. Parents must volunteer at least 30 hours each year and home visits also strengthen ties with the school.

“Both Eliud’s teacher and principal came to the house before school even started,” Vasquez said. “This helped Eliud because he is shy.”

The choice to expand in Milwaukee was in part because of Rocketship’s success in the city. “Milwaukee’s Rocketship is outpacing California Rocketship schools based on our internal data,” Venskus said.

She explained that nationally Rocketship schools see 1.5 years of academic growth in a single school year, while in Milwaukee students average 1.75 years of growth.

“The staff is always reminding students they will go to college, even in K4,” Vasquez remarked.

On the last Friday of every month, Rocketship students have a “college day.” Eliud Vasquez dresses in jeans and a Cardinal Stritch University t-shirt.

“It’s where his father went,” said the proud mother.

One thought on “Rocketship Plans to Open Second School”