Workers in the Underground Economy

By Brendan O’Brien, Milwaukee Neighborhood News Service - Jan 31st, 2014 11:29 am
Get a daily rundown of the top stories on Urban Milwaukee

A wobbly stroller filled with a plastic bag of aluminum cans rolled into a deep shadow underneath a dank viaduct.

A lanky man with leathery skin pushed the stroller as traffic whizzed through the nondescript corridor of warehouses and abandoned buildings.

“I’m doing this today because my little grandbaby’s birthday is Tuesday and we are going to have a surprise birthday party,” said Pete, who would not give his last name, as his voice faded and tears pooled in his eyes.

He wept. For that moment, the gravity of his poverty along with the love he felt for his granddaughter was too much to take.

But the 64-year-old pushed on, expecting to earn about $8.50 from recycling the bag of cans in the stroller. He hoped to use the money to chip in for a cake or a small gift for the little girl who would turn 4 a few days later.

Three white plastic garbage bags stuffed with cans hung from the handle bar of a rickety 10-speed bicycle as it silently glided past Pete when he entered the scrap yard.

The bike rider squeezed the hand brake with his right hand for a moment, slowing the bicycle to a halt next to a rusty trash can swarming with hungry bees waiting for his sweet cargo.

Soon after disposing of the hundreds of cans in the bags, Jason Stevens, 32, was handed about $15 and a pile of change at the service window of United Milwaukee Scrap, 3232 W. Fond Du Lac Ave.

“That’s why I’m collecting cans. It’s hard to find a job out here,” said Stevens, proudly lifting up and displaying his pay.

“Some have hit rock bottom” 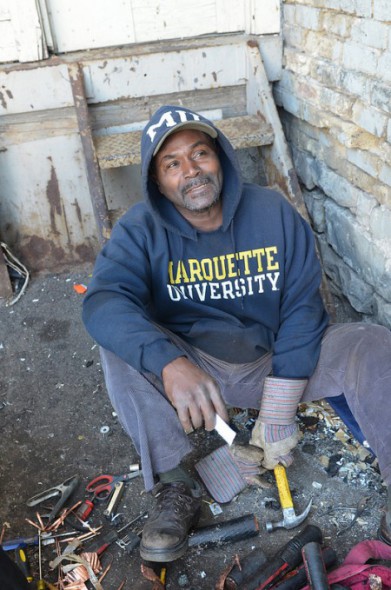 A scrapper uses a hammer to take apart cable containing copper, which he found in a Dumpster downtown. (Photo by Sue Vliet)

Stevens and Pete are just some of the men and women who collect cans and discarded metal throughout the city and bring it to scraps yards, where they are paid 55 to 60 cents per pound for cans and about $2.90 per pound for bare copper.

The company attempts to create a welcoming atmosphere for the scrappers by handing out pieces of candy and calling them by their names.

The scrap yard also holds a cash raffle each week for the scrappers. Each time a scrapper drops off metal, he gets a printed receipt with a number on it. A drawing is held each Thursday and the winners get a cash prize of $150, $75 or $25.

Many of the regular scrappers around the city have territories and times they like to work. Some scavengers work the bar scene, searching for cans in alleys late at night or early in the morning after taverns make their last call.

Others work construction sites where they search for metal scraps that have been thrown away in Dumpsters. Some also walk some of the hundreds of miles of city alleys, searching in and around garbage cans for any metal they can find and haul away.

They employ anything with wheels—from strollers to grocery carts—to transport their cargo to one of the several scrap yards in the city. More enterprising scrappers use trucks, loading up the flat bed with bulky items such as old dryers, televisions and swing sets.

This is not a job for the faint of heart. The work is physically grueling, at times requiring the scrapper to pull or push pounds of awkwardly shaped scrap metal and bags of cans for miles in the snow, rain or the summer’s stifling heat to the nearest scrap yard. 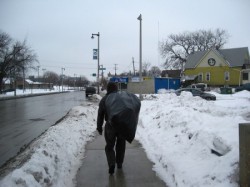 “Man, it’s a lot of work. A lot of work,” said Germaine, who was pushing a cartload of cans and metal into United Scrap, as a blustery wind and snow flurries whipped around him. The amount of money scrappers bring in depends on the person, said the 33-year-old man, who declined to give his last name.

Jerry Miller’s situation is typical. Each month, Miller gets about $500 from Supplemental Security Income and $119 from FoodShare, the state’s food stamp program. But he has only $100 a month left after paying rent and sharing his FoodShare with the rooming house where he lives. That goes to pay for any used clothes and hygiene items such as toothpaste or Band-Aids that he may need.

“You would never catch me on the street begging for anything,” said the 54-year-old laid-off car mechanic.

Miller swung a stuffed black garbage bag full of cans over his shoulder as he traveled by foot along Fond Du Lac Avenue. He was bundled up with layers of clothing and his eyes peered out from underneath the brim of a New York Yankees baseball cap.

“I don’t do drugs and I drink a little beer here and there. I just don’t have the money,” he said, as an agitated German shepherd barked at him from behind a chain-link fence while he made his way to United Scrap.

The endeavor is fraught with risk.

Scrappers have to avoid the police if they lack the required two-year city junk collector license, which costs $50 for those working on foot and $150 for those with a vehicle.

Muggings, dog bites and deep cuts from sharp metal are all part of the job.

“I’ve been shot. I’ve been stabbed. Been robbed. It’s about surviving, that’s all it’s about. It’s trying to make ends meet, trying to make some money to feed myself,” said Michael, a 29-year-old who did not give his last name, as he picked through garbage cans and alleys near Capitol Drive and 27th Street.

“No one wants to hire a two-time felon. I’m so screwed it’s pathetic,” he added.

Willy Whitehorn, 53, who has been collecting scrap since 1995, pointed to a stab wound on his neck, suffered on the same day he acquired various bumps and bruises when he was hit by a car. He also tells of a weed-smoking thug who stole a day‘s worth of cans from him.

“You have to be careful out here,” said Whitehorn while he reached into a garbage can outside of a gas station on 27th Street and grabbed a torn beer can.

“I’m not hurting anybody. I’m working. I’m not doing robberies. This is a job,” he said as he returned to his double stroller.

The day before, he earned $9 by collecting cans for about four hours. It was a rough day, by his standards. Typically, he takes advantage of the lucrative East Side, where he earns about $30 daily from collecting cans tossed out by beer-swilling college kids. But on this day, Whitehorn opted to work near his 76-year-old mother, who is being cared for at a nearby nursing home.

Whitehorn said he sees a brighter future for himself. But on this damp, cool Saturday morning, his sights were set on collecting enough cans to eat lunch and dinner.

“I have a goal to become a minister,” said Whitehorn, before he began to belt out a gospel hymn over the buzz of the early morning street traffic.