Just one block north of the suburbs in Bay View, he's written most of his 19 books from this home base.

Here is a home where history is made. This 1907 south side colonial in the Fernwood neighborhood of Bay View has been the home since 1991 of Milwaukee historian John Gurda and his wife Sonja Nelson-Gurda.

Located just a block north of the St. Francis border, the home commands a hilly prominence in the south side neighborhood, just blocks from the shores of Lake Michigan. One can almost visualize the dazed survivors of the Lady Elgin shipwreck of September 8, 1860 as they crawled their way up the bluff to salvation here, except the wreck happened in Illinois, and not here. Nevertheless, it is an evocative neighborhood, redolent of history.

Chez Gurda is above average in size, character and condition. It is an attractive home, well-tended and maintained. A retaining wall of limestone seems stable and secure, although the two Spruce trees that flank the home would be doing better service as holiday trees in a mall somewhere.

Back in 1978 the home was advertised for sale at $56,500, an adventurous sum for the area, but the home is well built and attractive and is on a double lot of 7,200 square feet.

That is, once the heater in the basement was repaired. “Slight dampness in southwest corner after very heavy rain.”

In 1987 the city inspector took a look at the property and said, “Ext. cond. fair. Brick on porch needs tuckpointing. Int. plaster and trim fair.  Holes in plaster.

These conditions were all noted before the purchase of the property by Milwaukee’s go-to historian and have since been remedied.

In August, 1991, just days after purchasing the home for $87,900, the Gurdas took out a permit for $28,500 for an addition and alterations to the property. The home purchase was “semi-valid,” the assessor ruled. “Cash sale, word-of-mouth advertising.”

The additions included an expansion of the kitchen and the erection of a spiral staircase in the 1-½ story-plus attic building.

Still the improvements were not over in the Gurda home. Remember the basement’s “slight dampness in southwest corner after very heavy rain”?

You can bet Gurda can tell you its history. On May 25th 1993, after a period of slight dampness, he hired McCoy contractors for $2,617 to “install inside drain tile and sump pump on west wall and around corners

“Cause: improper drainage, no inside drain tile caused cove leaks.”

Those who cannot learn from history are destined to repeat it, so Gurda’s prompt action remedying this 90-year old problem is a good lesson for all of us. 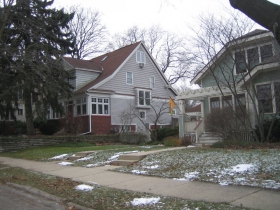 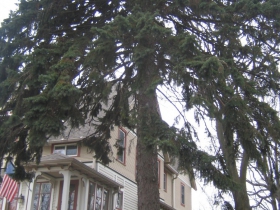 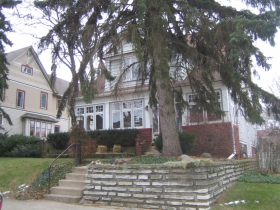 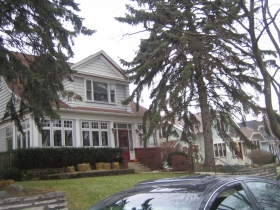 Gurda has been a Milwaukee historian for four decades, or nearly a quarter of the 168 years that Milwaukee has been incorporated as a city. His biography lists him as the author of 19 books, “on subjects ranging from life insurance to Frank Lloyd Wright and from heavy industries to historic cemeteries.” He often supported himself by writing corporate histories, including books on Miller Brewing, Allen-Bradley and Wisconsin Electric Power and two histories of Northwestern Mutual Life.

As a non-academic historian, Gurda must support himself through his continual activities; he does not have the luxury of tenure at a university. He has a busy lecture schedule. [His last of 11 lectures entitled “Built on Water” will be delivered December 4th, at 7 p.m. at Discovery World.] In the 1970s he wrote somewhat apologetic brochures about the joys of urban living for the Department of City Development. Gurda also got government money for the famous Milwaukee neighborhood poster project of the 1980’s: he wrote the material on the back of the posters.

Gurda also scaled the heights of society with his 1993 epic: “A Sense of Tradition: the Centennial History of the Milwaukee Country Club.” The Lynde and Harry Bradley Foundation paid Gurda to write a history about the conservative group’s founders, and was a major bankroller of his chef d’oeuvre, “The Making of Milwaukee,” (published in December, 1999) and its later, affiliated series on Milwaukee Public Television with the same name. This included sequences where Gurda appears on camera, waxing forth on heroes and villains, though the latter are in short supply, given his generally upbeat view of local history.

For the most part, Gurda looks at the city’s history from the workers’ and immigrants’ perspective, with an always approving nod to the old Socialist governments of Milwaukee. This viewpoint comes naturally for one of his birth. Until he reached the age of 8, Gurda and his parents lived on the south edge of Layton Park, hard by the graves and mausoleums of Forest Home Cemetery. Since 1850, this south side graveyard, owned by the Warden and Vestrymen of Yankee Hill’s St. Paul’s Episcopal Church, has provided an eternal resting place for generations of the gentry who would never set foot in the neighborhood during their lifetimes. “That gracious graveyard formed the eastern edge of my childhood,” the author remembered.

The Gurda affiliation with everyday folks goes back generations. His grandfather, also named John, owned a hardware store at S. 32nd St. and W. Lincoln Ave. Gurda’s dad, Arthur, grew up behind the shop. This was an immigrant, working class neighborhood, where residents, many of them skilled laborers, would make their own home repairs. The stock in trade was decidedly not granite countertops and Viking ranges. Gurda’s great-uncle, Tony Korpal, was a barkeeper, and you can be fairly certain it was not the bar of the Milwaukee Country Club that he was keeping.

Gurda has for years written a column on Milwaukee history for the Milwaukee Journal Sentinel done in a congenial and thoughtful style, or so it was until Scott Walker won the governorship, when Gurda suddenly got more edgy.  “An Autocratic King Scott Damaged State,” he wrote in June, 2012, about our Governor. “GOPs Motto: ‘Grab all you can,” he wrote in January, 2013. “Walker loves Milwaukee? We’re not feeling it,” was his lament from March, 2013. In that article, Gurda discerns in Walker “an anti-urban bias that runs like a thread through his political career.”

Walker, Gurda writes, “is a ruthless and calculating politician who will exploit any weakness, make any promise and press any advantage to get in office and stay there. … But Walker is a specific kind of politician currently in vogue: an ideologue who sees the world in black and white. His outlook makes him, among other things, a tireless polarizer.” Grr.

In his more easy-going mode, Gurda also appears as resident historian on Channel 10’s “Around the Corner” show, which stars comedian John McGivern, and thereby combines two of Milwaukee’s foremost local heroes and wordsmiths, now both House Confidential honorees, as McGivern was profiled by us last week.