The Sheer Endurance of Steel

For nearly a century most bikes were made of steel, which still has advantages over aluminum.

By Dave Schlabowske, Bike Federation of Wisconsin - Nov 29th, 2013 10:13 am
Get a daily rundown of the top stories on Urban Milwaukee 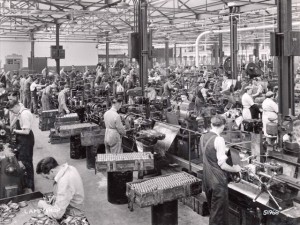 The Raleigh factory in Nottingham, England.

One of my favorite rides of the year is the Steel is Real pub crawl. Organized by Phil Van Valkenberg, the ride is a celebration of still rolling steel bicycles, mostly old to very old. I pedaled my 1936 Raleigh the last time I took part. Other than the patina that comes after 78 years of dutiful service, my Raleigh is as stout as the day it rolled off the factory floor on Faraday Road, in Nottingham. A big part of the reason for my Raleigh’s longevity is that it is built entirely of steel. 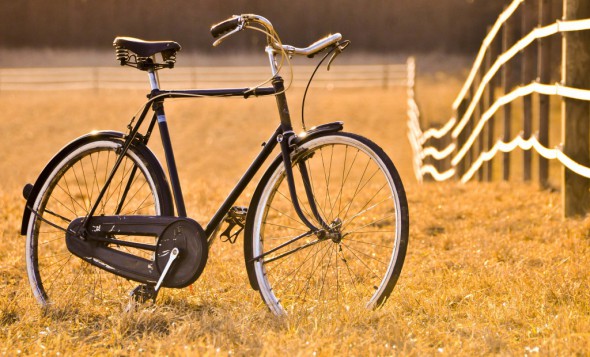 Another horse in the stable: my 1936 Raleigh in the original condition when I bought it.

Aluminum’s incredible strength to weight ratio (it has about 1/3 the density of steel and 1/2 that of titanium) and its resistance to corrosion has made it a tempting material for bicycle frames and components since the St. Louis Refrigerator and Wooden Gutter Co manufactured the LuMiNum in 1893. The company was so sure of their aluminum bicycle, they challenged other bike makers: “If your bike is stronger than ours, we’ll donate $500 [a huge sum in 1896] to a charity of your choice.”  So why was it aluminum bicycles fell out of favor for the next 100 years of bicycle manufacturing? 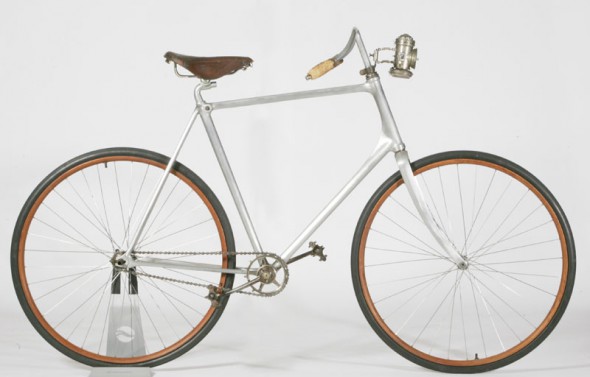 Other than a few minor manufacturers, it took nearly 100 years for aluminum to become a common frame building material. Monark reintroduced the aluminum frame in 1935 with eight models. One or their better known aluminum bicycles was the Monark Silver King, but it was heavy and flexy compared to similar steel bicycles. It was really not until 1982 Cannondale brought aluminum bicycles into the mainstream.

The reason it took so long is that while aluminum does have a high strength to weight ratio, there is more to making a good frame than strength and weight. Metals have both an elongation limit (how far you can bend them before they break) and fatigue strength, a mathematical expression that defines how many times a metal can be stressed before it breaks. In both of these very important areas, steel is far superior to aluminum. Other than the physics classes I took in high school and college, I learned most of what I know about bicycle metallurgy from the articles Scott Nichols (of Ibis), published in Velo News back in the mid 1990s and from a few pieces Grant Peterson (of Bridgestone, now Rivendell) wrote around the same time period. Nichols still has his great series archived on the Ibis website here: Metallurgy for Cyclists. Peterson has a good collection of writings on bicycle frame building materials on the wonderful Rivendell Bicycles website here.

For those who don’t want to geek out too much, this section from Nichols tells you all you really need to know:

Guess what? This is another important property to consider but, once again, not by itself. Fatigue failure occurs by applying cyclic stress of a maximum value less than the static tensile strength of the material … until your specimen fails. This can be a cool test, because the alternating stress mimics vibrations and impacts that happen when you ride your bicycle down the long and winding road.

The fatigue strength itself is a measure of the stress at which a material fails after a specific number of cycles. What’s tough though, is designing the proper test. Again, a bicycle is a complex puzzle to consider. There is no standard test for fatigue. Another kink is that fatigue tests are done by cyclic loading of similar stress, whereas the loads you apply to your bicycle parts are uniform.

Ferrous alloys (a.k.a. steel) and titanium have a threshold below which a repeating load may be applied an infinite number of times without causing failure. This is called the fatigue limit, or endurance limit. Aluminum and magnesium don’t exhibit an endurance limit, meaning that even with a miniscule load, they will eventually fail after enough load cycles.”

The way bicycle manufacturers have gotten around this is by over compensating and building aluminum frames much stronger than they need to be using modern heat treating and large diameter butted tubes. Butted tubes are thicker where they need to be near the joints and thin where tubes are not stressed, in the middle.  Thanks to big butts, smart engineers have managed to make modern aluminum bicycles and components will outlast most people who buy them.

But aluminum’s shorter fatigue life can come back to bite you in the butt if you ride a lot more than the “average person” engineers design for or ride with much heavier loads than what engineers project. Because I fit into both those categories, I have recently had to replace the aluminum fenders on my Schwinn commuter and I am also in the market for a new rear rack.

Long-time readers may remember when I published the post about adding shiny Velo Orange aluminum fenders to my “dutchified” Schwinn. While the fenders were an attractive upgrade over the cobbled together plastic fenders I originally installed on the bike, the fenders cracked several times at the places where they were attached to the bicycle and to the fender stays. I managed to MacGyver them together for a year after they began to fail, but after the most recent failure, I had to replace them. 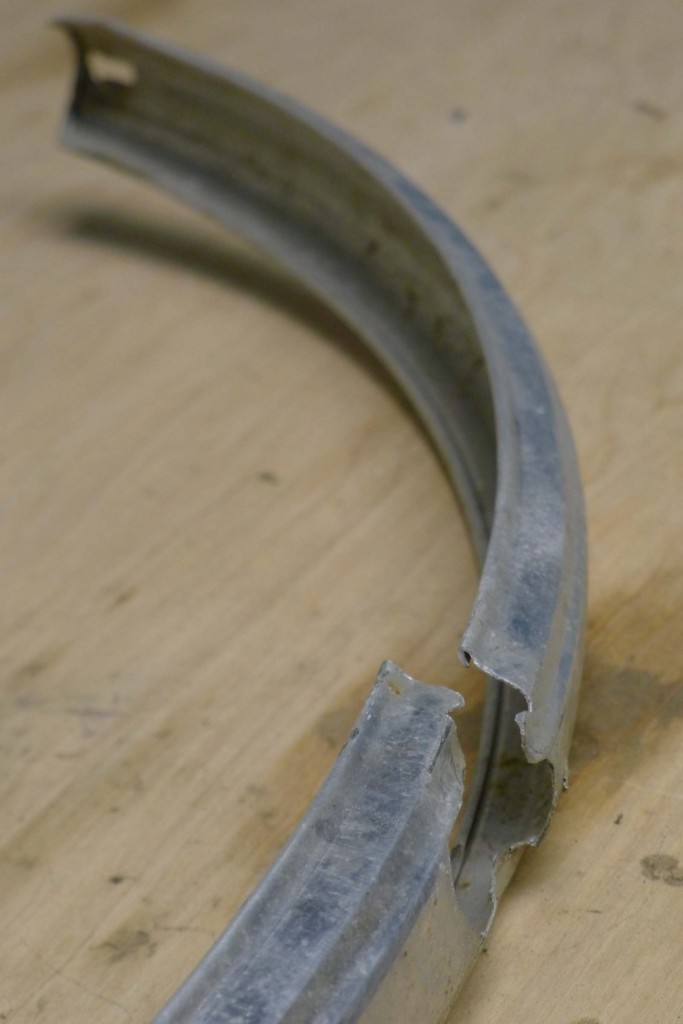 The crack near where the rear fenders attach to the brake bridge. 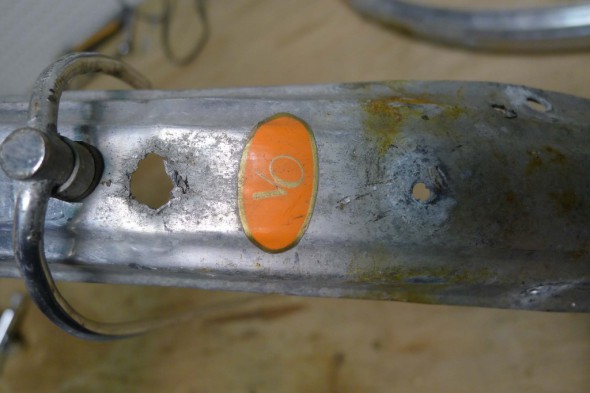 I had to drill a new hole and move the fender strut after it broke through the fender, even with a big washer and a leather pad between the fender and fasteners. Also note the corrosion from exposure to salt.

I like the trouble-free, full coverage Planet Bike Cascadia fenders a lot, but I really like the way the polished art deco-style Zepplin Fenders from Velo Orange look on my vintage Schwinn. My solution was to purchase polished stainless steel fenders, which should be easier to keep shiny. While aluminum doesn’t “rust” in the traditional sense, once its surface oxidizes, it can be difficult to keep it shiny in our climate. 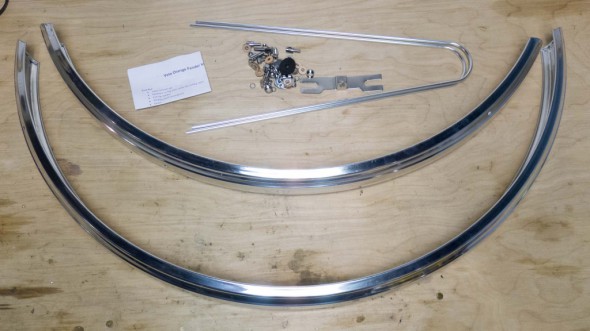 The shiny new fenders from Velo Orange come with excellent instructions and lots of well thought out mounting hardware to make installation easy.

It took me about an hour to install my fenders, but remember I have a bike with an internally geared rear hub on the back and a rear light that is run from the front dynamo hub. Those two elements probably added an additional 20 minutes to my install time. That means most of you should be able to complete the job in a bit over half an hour. 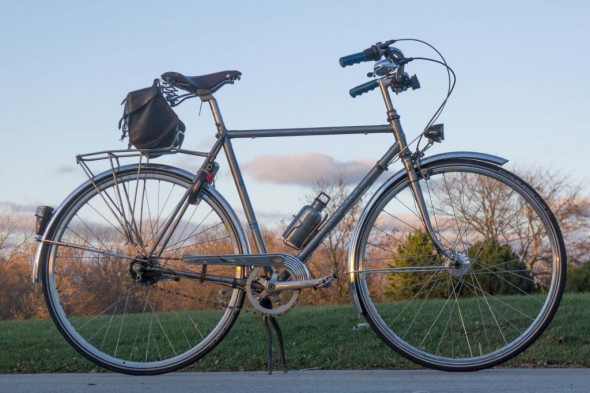 My ride after the fender install.

My next project will be to replace the now-cracked aluminum rear rack with a new stainless steel rack. The rack is probably from the same era as the bike. Given the heavy loads of books, magazines and computers that I routinely haul on this bike, it is no wonder the rack failed. Any suggestions for a shiny new rack? I prefer chrome plated chromoly or stainless, and I don’t want to spend a fortune. 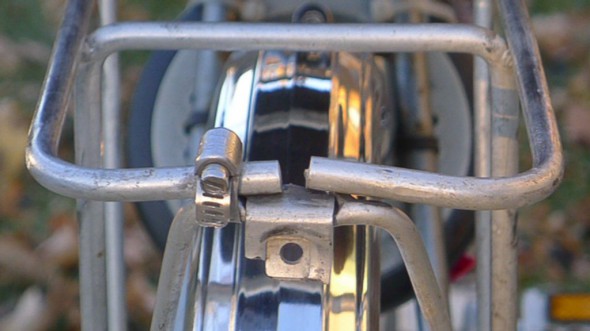 My MacGyvered rear rack now broke on the other side. Note the aluminum tail light mount failed long ago.

One thought on “Bike Czar: The Sheer Endurance of Steel”