The state's only GOP member of congress voting to raise debt ceiling explains why.

By Bill Lueders, Wisconsin Center for Investigative Journalism - Oct 30th, 2013 11:24 am
Get a daily rundown of the top stories on Urban Milwaukee

Reid Ribble knows he’s not like some other members of Congress. But he’s careful to not peg himself as wiser or more virtuous. Just differently oriented.

“I’m a bit of an outlier just in general,” says Ribble, the only Republican member of Wisconsin’s congressional delegation who voted to raise the nation’s debt ceiling and reopen the federal government. “I view life through a little different prism.”

Ribble, who represents the 8th congressional district in northeast Wisconsin, including Green Bay and Appleton, was elected in 2010 after running his family’s roofing company for nearly 30 years.

“So I’m more pragmatic than some of my colleagues and certainly less politically minded,” Ribble says. “I’ve never lived in a political realm before, so I don’t measure what I do in terms of the political ramifications.” 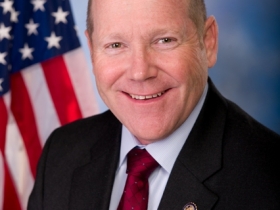 Reid Ribble: “I’ve never lived in a political realm before, so I don’t measure what I do in terms of the political ramifications.”

But Ribble says that, as a businessman, he grasped the damage a default could do, adding with a chuckle that “having a functioning government is simply better for the economy.”

Well before the pivotal Oct. 16 vote, Ribble criticized the shutdown, driven by opposition to Obamacare, as “the wrong tactic from Republicans.” On a national cable news show, he dismissed a fellow GOP congressman’s claim that breaching the nation’s debt ceiling might be a good thing as “just crazy talk.”

But Ribble voted to repeal or defund Obamacare dozens of times, and sided with other Republicans in votes that led to the shutdown. He says he’s consistently reflected the will of his constituents.

At first, the calls and emails coming into his office “were much more in favor of shutting the government down and forcing some reform,” Ribble says. “As the shutdown lingered, it began to flip.” Likewise his own position.

Ribble belongs to Problem Solvers, a bipartisan group of House and Senate members “committed to regular across-the-aisle meetings.” In July, he made headlines by criticizing the partisan redistricting that lets politicians create districts that are overwhelming Democrat or Republican.

Importantly, Ribble’s 8th congressional district does not fit this mold. In 2012, nearly 48 percent of its voters picked Democrat Barack Obama.

David Canon, a University of Wisconsin-Madison political science professor, says this allows Ribble to stake out more centrist positions, without drawing a strong challenge from the Tea Party, which cheered the shutdown.

Gannett Wisconsin Media reported that a national group approached at least one Republican in Ribble’s district about mounting a primary challenge. The Republican declined, saying he agrees with Ribble’s vote to end the shutdown.

Ribble says he’s “aligned” with the Tea Party on government being too large and intrusive, and the need to reduce the national debt. But he faults some of its voices, like those on the far left, for “too much yelling and not enough talking.

Ribble’s vote on the shutdown earned him a thumbs up from the Appleton Post-Crescent and praise from the Wisconsin State Journal, which called him “the only Wisconsin Republican who got it right.”

And Canon says Ribble’s stance might even help him raise campaign funds, now that the U.S. Chamber of Commerce and other pro-Republican business groups are signaling support for moderates over Tea Party stalwarts. The chamber gave Ribble $3,000 in his last election, of the $2.3 million he raised.

But Ribble’s status as a proponent of calmer relations on this issue is not necessarily secure, given the forcefulness with which he vows to hold Obama to his promise to negotiate on debt reduction.

As Ribble said in a statement explaining his vote, “If he fails, this will be my last vote under this president to extend the debt limit.”