How to Improve the City’s Quality of Life 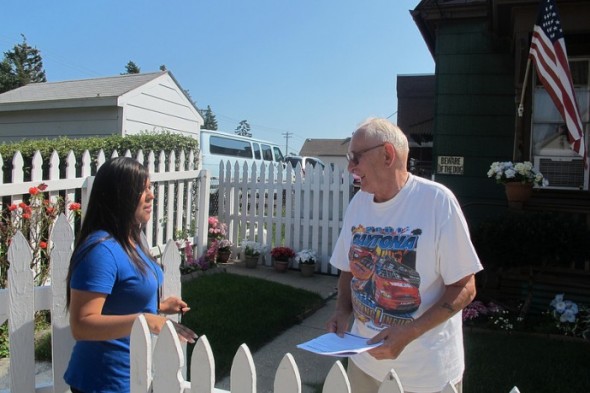 Maritza Ugarte, community organizer for Safe & Sound, speaks to Anthony Tolsky, who raises concerns about garbage in the area. (Photo by Edgar Mendez)

Maritza Ugarte recalled meeting a woman while conducting outreach in the Walker Square neighborhood and asking whether she had safety concerns. Reluctant at first, the woman eventually told her about a vacant house across the street that she believed was a hub for drug activity. Going door to door, Ugarte heard the same story over and over again. She notified the community prosecutor, and soon after, the drug dealers were evicted.

Ugarte hopes to achieve the same type of results as she takes her organizing efforts into Clarke Square and Layton Boulevard West, two South Side neighborhoods that are part of the Zilber Neighborhood Initiative.

A $120,000 grant from the Zilber Family Foundation to Safe & Sound is being used in part to fund Ugarte’s position as a bilingual community organizer working with the Clarke Square Neighborhood Initiative and Layton Boulevard West Neighbors to support implementation of their Quality of Life Plans.

“She’ll be working with them on the public safety and resident engagement aspects of the plans,” said Barbara Notestein, executive director of Safe & Sound. 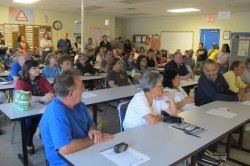 An overflow crowd of residents voiced their concerns at a recent crime and safety meeting in District 2. (Photo by Edgar Mendez)

Ugarte also will work collaboratively with the Department of Neighborhood Services, the District Attorney’s Community Prosecution Unit (CPU), and officers from Districts 2, who serve the communities, added Notestein.

Ugarte began working as an organizer for Safe & Sound a year ago and was recently promoted to her new position.

“There are so many exciting efforts going on in these neighborhoods,” said Ugarte, mentioning the Journey House Center for Family Learning and Youth Athletics, the new Packers Field at Mitchell Park and youth programs at MCC and Ascension Lutheran Church.

Her tasks include organizing block clubs and watches, going door to door to address resident concerns and collaborating with youth leaders to implement anti-crime initiatives. She began working in the community while still in high school, first as a youth volunteer and then an employee of the Milwaukee Christian Center (MCC). She then became an organizer at Safe & Sound in the neighborhood near Kosciuszko Community Center.

Violent crime has been a problem this summer across the city, including in District 2 on the South Side. More than 75 concerned residents attended a recent crime and safety meeting. Though robberies in the district have gone down, a spate of shootings, some of which were fatal, have residents on edge and led police to plead for help in identifying confrontations before they turn violent, according to Sgt. Mark Krowski.

Krowski told the overflow crowd that most of the shootings, as well as many other crimes in the neighborhood, are directly related to house parties and “problem properties.”

He asked residents to call police to report nuisances such as loud parties or music, fighting or loitering. Lt. Richard Stein, also of District 2, said this type of information is law enforcement’s most useful tool.

“Without it, we don’t know what we’re targeting or what we should be looking for,” Stein added.

That’s where an on-the-ground effort by organizers such as Ugarte comes in, Notestein said. “She (goes) door to door, engaging with residents who air concerns,” explained Notestein, who noted that Ugarte also reports her own observations.

Knocking on doors is fine with Ugarte, who said she’s not an office person anyway, as she walked down West Scott Street.

Notestein said that Ugarte is great at organizing block clubs and watches, and fostering relationships among residents, Community Prosecution Units and police. One of her main tasks is to identify and document resident complaints of illegal activities and also deliver warning letters for nuisance properties.

Ugarte is still getting to know residents in Clarke Square, though she’s already met with local leaders. On a sunny day in late summer, she met Anthony Tolsky, who’s been living in the same green house surrounded by a white picket fence since 1953. She greeted him with a smile, and he told her that he tries to keep the area near his house clean, but that young people are littering the neighborhood.

Ugarte explained that her duties include organizing and conducting neighborhood cleanups. Tolsky smiled, saying, ”They need to get taught to do it.

Walking away, Ugarte said, “I love this stuff; you do a little bit of everything.”