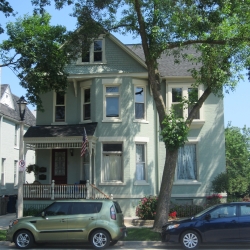 You might call Beth Weirick our Downtown Ambassador. Long known as Beth Nicols, she was recently married and changed her name, but still runs the Downtown business improvement district, and pops up frequently in the news as a result. She now lives in a Lower East Side home with a long and varied lineage, just the sort of home you’d want one of our city’s promoters to live in.

It was 121 years ago, on Leap Day, February 29th, 1892, that Frank Bishop, Jr. was granted a permit to construct a 34’ x 57’ $2,000 home on Lyon St. near the cross street of Astor. Bishop was a photographer with a studio at the southwest corner of Wisconsin Ave. and Broadway, and was a congregant at the Episcopal Cathedral of All Saints, where he was married in 1874. His new commute to work would take him right past his parish church in the small town world of Yankee Hill, Milwaukee.

Along the way he would also pass the sumptuous homes of his fellow congregants and likely patrons, eager to pose for their cartes des visites. The Bishop home was a frame structure, with a brick veneer. Such brick-clad buildings were to remain comparatively rare north of Lyon, where fashion took a pause between the elegance of Yankee Hill and the bustling immigrant clamor of Brady Street. In fact, the Prospect Avenue plutocrats, accustomed to fresh lake breezes, likely turned up their noses at the new Bishop residence, since it was located on the same block as a livery stable.

In 1898 a 16’ x 17’ addition was added to the rear by the next owner George Heinemann, whose straw works was a giant concern of the time. That left enough room for a further 34’ x 16’ addition to the building in 1925 when it was owned by a fellow named Tony Zulli, who owned an ice cream bar manufacturing company. Zulli also managed to squeeze a steel garage onto the west side of the lot in 1927, but of that relic nothing remains.

There was extensive fire damage to the building on May 13th, 1972. Three rafters, three joists, the wall finish and the millwork had to be replaced.
Somewhere along the line (probably in 1980 when two boilers were added) this large single family residence became a triplex.

Immediately to the south, in the mid-seventies, every city block from the lake to the river between E. Ogden Ave and E. Lyon St. had been cleared of buildings for a never-built-freeway, a project whose impact still bedevils this city. The view outside the windows of this home was bleak. For years this corridor, that once was a cultural and economic transition from Yankee Hill to Brady Street was vacant, littered, desolate, dark and unsafe. The deteriorating conditions of the buildings and the neighborhoods were ample testimony to the folly of this devastation. It was not until the end of the eighties that the East Pointe Commons was undertaken.

In 1995, it was bought for $185,000 by Joseph T. Weirick, the current owner, and his then-wife. In 1998, Weirick let the assessor in for a look-see. “The interior of the first level is well kept; newer rugs. … Noted very high sales in this area close to new condos and Brady Street renovation for very old buildings with average maintenance,” the assessor reported in his notes.

Today the building still has a nice exterior paint job, and the neighborhood has only increased in desirability. Like virtually all homes in Milwaukee, its assessed value has taken a hit, standing at $290,300. This is up from the 2012 assessment of $286,500, but considerably below the property’s peak assessment in 2006 of $389,700.

The building’s three units occupy 3,428 square feet of living space, and have six bedrooms and three baths in total. It was air conditioned in 2012. Weirick and his new wife, Beth, occupy one unit (upstairs, we surmise) and rent out the other two units.

Joseph T. Weirick is the president of CRP Commercial Services, LLC, a real estate financing corporation, and has had previous experience at senior executive positions with Faison Corp., Trammell Crow Co. and CBRE / Polacheck. He was involved with numerous catalytic downtown projects including the 1988 100 East Wisconsin building and the downtown Riverwalk. His civic duties have also taken him to the board of directors of Milwaukee Downtown Business Improvement District #21, which has been headed since its 1998 inception by his current wife. 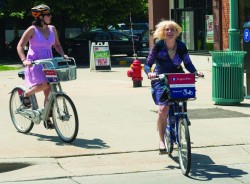 In May, the directors of the Milwaukee Downtown Business Improvement District #21 announced a rebranded marketing campaign with its slogan of “cya Downtown, Milwaukee.” The campaign reflects the group’s new mission “to lead and inspire believers in Milwaukee to engage in efforts that build Downtown as the thriving, sustainable, innovative and vibrant heart of the community”.

The original purpose of the District “was to sustain the competitiveness of Downtown and ensure a safe, clean environment conducive to business activity.”

Elizabeth A. “Beth” Weirick is undergoing a rebranding campaign of her own. For years she had been known as Beth Nicols (often misspelled “Nichols”) and was one of Milwaukee’s most successful women spokespeople, where her telegenic looks and spirited delivery made her a favorite of the cameras. Behind the scenes, she is known as a capable and charismatic leader.

With her September 29th, 2012 wedding to Joe Weirick, at St. Hedwig’s Church building on Brady Street, she has adopted his name and left behind the old one. She also sold her Washington Heights home and move to Lyon St., a good deal closer to Downtown.

Beth came to the Downtown BID after some years at the Westown Association.

The BID was founded in 1998 and is largely funded by assessments paid by some 500 property owners on 160 city blocks. The district has a valuation of nearly $2 billion; its 2013 budget is $3,225,786, the largest of the city’s 44 Business Improvement Districts.

Weirick runs the Street Ambassador program that provides 35,000 on-duty hours for a staff that keeps an eye on downtown streets. Its clean sweep program costs $784,727 and keeps the downtown streets clean. Economic development, marketing and promotion take up $1,327,440 of the group’s budget.

How Milwaukee Is It? With the house being just a one mile walk to city hall, it is just about downtown. 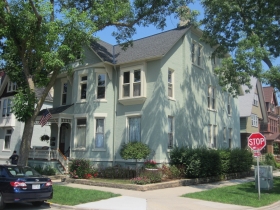 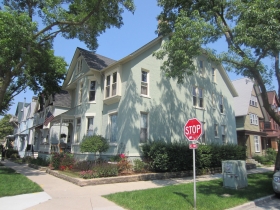 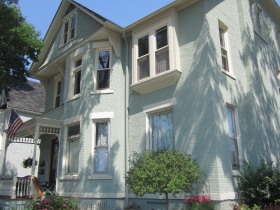 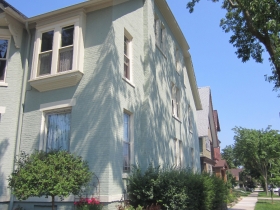 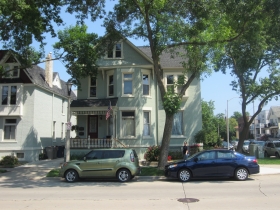 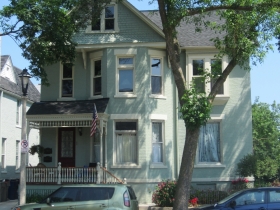