A bed and breakfast owner and historic activist leads the way in restoring the Concordia neighborhood.

By Katie Cutinello and Aaron Maybin, Milwaukee Neighborhood News Service - May 21st, 2013 10:15 am
Get a daily rundown of the top stories on Urban Milwaukee

Time rewinds to the early 1900s when a visitor steps into Andrew Parker’s home. Staged with vintage furniture and filled with natural light, the mini-mansion features a mosaic-tiled fireplace, and ancient artwork decorates the walls. Everything from the chickens in Parker’s backyard to the stained-glass windows and handcrafted urns has a story — and so does he.

Known as “Andy” to friends and family, Parker, 49, is out to make Milwaukee’s Historic Concordia community a better place – starting with the house that he and his wife, Marie, bought for next to nothing at an auction and have remade into a bed and breakfast. Located at 3026 W.  Wells St., it’s filled with knickknacks, portraits and collectables, but it’s not a museum, he said.

While the structure is Victorian style, “All of the things you see are very different than what you’re going to find in a Victorian home,” said Parker, who is also a movie lover, artist, handyman and father of two. In addition, he teaches kindergarten at Texas Bufkin Christian Academy, 827 N. 34th St., which is four blocks from his home.

In the 1980s, the Milwaukee native teamed with neighbors and the city’s Office of Historic Preservation to establish the area bounded by 27th and 35th streets, and Wisconsin and Highland avenues as Historic Concordia. Parker is president of Historic Concordia Neighborhood Inc., an organization working to enhance the community. 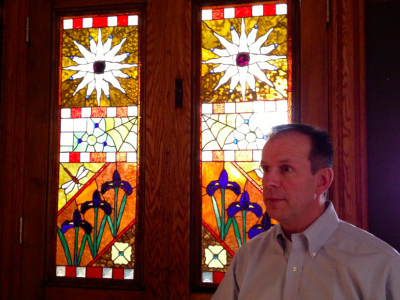 “He was one of the original people that worked to get the board going and the historic designation,” said Kristi Westcott, a 10-year resident of Concordia and Parker’s friend. “Andy and his wife were some of the first people we met when we moved here.”

Parker and his wife opened the bed and breakfast in 2000. It is one of three in the neighborhood that let weekend explorers uncover the city’s lost culture, he said.

“We have neighbors who are very much into the history of their houses,” Parker noted, “restoring their houses, maintaining and protecting the historic value of their houses, as well as living in them and having a pleasant neighborhood. There are a lot of really cool people (here).”

Parker’s passion to preserve Milwaukee’s history stems from his roots. His mother, a full-blooded Oneida Indian, taught him and his nine siblings to value their culture. These days, he supports Native American students at Marquette University, said Jacqueline Schram, Marquette’s governmental and community affairs associate.

“His family is a founding family of the Indian Summer Festival and he continues to volunteer on the festival grounds,” Schram said.

John Hennessy, president of Hennessy Group Inc., has known Parker since 1990 and said he is a “big fan” of the changes the organization’s president has helped bring to Historic Concordia.

“I think it had a little bit of a set back the last few years,” Hennessy said. “But I think it’s on its way back. Once people find out about the area, they find it to be pretty attractive.”

Parker said he is confident that if the city mimics locales elsewhere that have reclaimed tourism, such as Charleston, S.C., then more families will be drawn to its historic charm. “Tourists want to see more of this.”

“It’s the most challenging thing I’ve ever done,” Parker said. “But it’s fun. Things can get better (in Milwaukee) if we just roll up our sleeves and get to work.”