A Steady Rise to District Captain 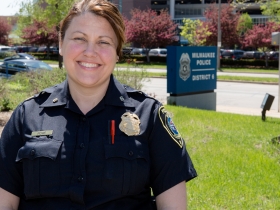 In 2001, Gary Leon Ridgway murdered his last victim, ending a nearly 30-year killing spree in Washington state. Known as the Green River Killer, Ridgway boasted of committing nearly 100 acts of rape, stalking, strangulation, murder and necrophilia. As a college student in the early 1990s, Diana Rowe became fascinated by the mystery of who the Green River killer was, and that influenced her decision to seek a career as a police officer.

In October, Rowe was named District Six commander for the Milwaukee Police Department, 11 years after she started as a rookie cop in that south side district. Already she has begun to make changes that may affect police and the community they serve.

Rowe, 45, spent her childhood in nearby Oak Creek. She attended middle school at Saint Matthew Parish and graduated from Oak Creek High School.

Her father worked for years for Ladish Co. in Cudahy, but was eventually laid off by the company. Rowe recalls the struggle her father had finding employment and remembers thinking that whatever career she chose, it would need to be stable.

Until high school, Rowe had no aspirations to be a cop, but she gives credit to the Oak Creek Police Department. As senior she had a house party with a few friends while her parents were out of town. Oak Creek officers knocked on the door.

“They showed up, were respectful and didn’t arrest anyone. Just growing up in Oak Creek I looked up to the cops there,” said Rowe. “For trick-or-treating the kids would go out at night and the cops in patrol cars would hand out candy to the kids.”

After high school, Rowe attended Alverno College, where she earned degrees in business management and psychology. It was there Rowe says she became “fascinated and intrigued” by the Green River Killer and read books about other infamous serial killers.

STARTING OUT WITH MPD

On March 18, 1991, Diana Rowe enrolled in the Milwaukee Police Department’s training program. She remembers the sergeant reviewing her application; Rowe felt he was trying to dissuade her from joining the force because she was female.

“Being a woman has some disadvantages, but also has some advantages,” she says. “Women tend to have better communication skills and don’t have the brute strength.” The lack of strength has its advantages, she notes, in that there are fewer complaints from citizens.

Today, 21 percent of the MPD’s force is female — about 322 officers, according to the 2011 annual report published by the Milwaukee Fire & Police Commission. That’s up considerably from when Rowe joined.

Among the ranks from captain up, there are seven females — 28 percent — and 25 males. The percentage of women on the force — and women leaders — is steadily rising.

MPD Assistant Chief James Harpole remembers Rowe as a rookie: “Diana Rowe was very upbeat and had an aggressive attitude,” says the 26-year veteran, who is also a longtime neighbor to Rowe. “She had a high interest in applying her education to doing her job.”

Rowe started in District Six, then was transferred to the Prisoner Processing Station in 1994 and then to the Identification Division. She was promoted to Identification Technician with just under five years on the force.

One event that has stuck with Rowe over the years is the Big Blue Crane collapse at Miller Park in 1999. Three crane operators were killed and five more injured during the lifting of a wall on the north side of the stadium. Rowe was assigned to take pictures at the scene as the I.D. tech and still has bad dreams of the horrific aftermath.

The following year, Rowe gave birth to her first child, Kyle. While she embraced the new life in her family, juggling the divergent worlds of parenthood and cop work was a struggle. Two years later she had her second child, Jennifer.

Between 2008 and 2011, Rowe moved from the I.D. Division, to Integrated Justice Services and then to MPD’s Intelligence Fusion Center. The Fusion Center produces threat assessments for domestic and international terrorism, e-tracing, and ballistic identification. The center embraces a research-based policing model.

From the Fusion Center, Rowe became Chief of Staff for Chief Edward Flynn in 2012, a position that is usually held by civilians.