The New Czar of Community Safety

A partnership between the Milwaukee Police and a community organization will pay for a new leader to work on collaborative solutions to crime.

By Brendan O’Brien, Milwaukee Neighborhood News Service - Apr 30th, 2013 10:08 am
Get a daily rundown of the top stories on Urban Milwaukee 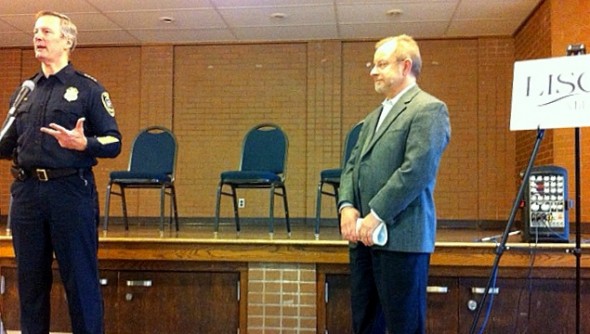 Milwaukee Police Chief Edward Flynn and Leo Ries, the executive director at LISC Milwaukee, discuss the need for a director of community safety at the community safety forum and happy hour. (Photo by Brendan O’Brien)

A new partnership intended to marry the economic development efforts of the Local Initiatives Support Corporation and crime reduction efforts of the Milwaukee Police Department was unveiled recently during a forum and happy hour event at the Urban Ecology Center.

The partnership takes the form of John Connelly, LISC‘s new director of community safety, who has begun to spearhead collaboration between organizations, the police and district attorney’s office to reduce crime and address public safety challenges in the neighborhoods served by Milwaukee’s LISC.

“If there is a troubled hot spot in a particular neighborhood, have (the stakeholders) come together, talk about it, see what the issues are and work collaboratively to come up with a combined solution,” Connelly said. 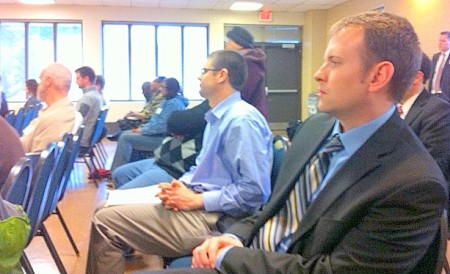 John Connelly (right), the new LISC director of community safety, listens to the presentation at the Urban Ecology Center. (Photo by Brendan O’Brien)

“Day to day (we) are out there working with (our) communities to create sustained neighborhoods capable of sustaining civic life. That’s our mission,” Police Chief Edward Flynn said. “We start with community, because that is our purpose, to create strong communities.”

“Crime and the feelings of disorder really get in the way of creating safe, attractive and nurturing neighborhoods,” said Leo Ries, the executive director of Milwaukee’s LISC. “So we need to get more deeply involved in the community safety work.”

Connelly is a longtime city resident who has had stints in the mayor’s and the city clerk’s offices. The 32-year-old also worked as a staffer for the police department’s Community Prosecution Unit program, which brings together crime fighting efforts by the police, district attorney and community members.

“The police department can’t arrest itself out of crime and can’t arrest the problems away in a particular neighborhood,” Connelly said. “There are times you need that traditional law enforcement role … but there is a whole host of other public safety and crime issues that haven’t been dealt with successfully by traditional enforcement methods.”

Prostitution in the Washington Park neighborhood along Lisbon Avenue is one such public safety issue. Prior to Connelly’s arrival, the police department, district attorney’s office and community groups and organizations such as Washington Park Partners, the United Methodist Children Services and the Benedict Center developed a diversion program.

“The women (who) agree to participate, (don’t) end up getting charged with the offense,” Connelly said. “The recidivism rate is much, much lower for those (who) go through the program.”

Connelly also is focused on bringing Crime Prevention Through Environmental Design (CPTED) training to Milwaukee. Police and community members will learn how to make changes to neighborhoods’ physical environments to make them more resistant to crime, according to LISC.

Cooperation between the police department, community organizations and residents have begun to reap benefits from this type of collaborative work in the form of funding. The city, with the police department, LISC and Safe & Sound as grantees, recently received a $600,000 Byrne Criminal Justice Innovation 2012 grant from the Department of Justice.

Correction.  An earlier version of this story stated that John Connelly facilitated the development of a diversion program.  This was incorrect, the program was developed prior to his arrival.