Experts avoid exposing themselves and their children to these chemicals but don't have enough evidence for public warnings.

By Kate Golden, Wisconsin Center for Investigative Journalism - Apr 24th, 2013 10:21 am
Get a daily rundown of the top stories on Urban Milwaukee 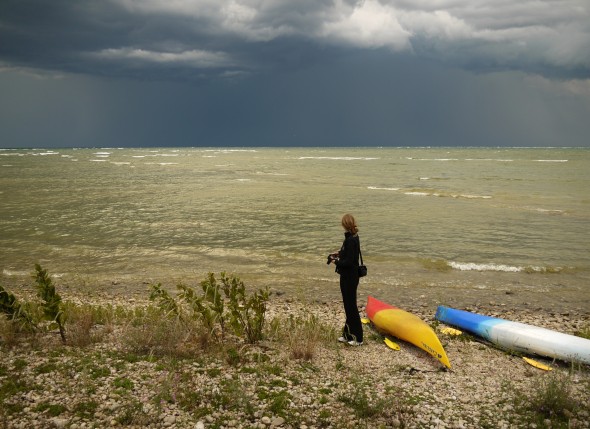 Concerns are growing about endocrine-disrupting chemicals in the Great Lakes and other surface waters. While eating too much contaminated fish is risky, none of the experts advised avoiding swimming. Lake Michigan, August 2012. Andy Hall/Wisconsin Center for Investigative Journalism

Links and resources on endocrine disruptors

Federal and state governments have issued scant guidance on the risks hormone-disrupting chemicals pose to people, but University of Wisconsin-Madison pediatric endocrinologist Ellen Connor is not waiting for an official verdict.

To protect her children, Connor has thrown out all her old plastic containers that likely contain suspected endocrine disruptors. She uses fresh vegetables to avoid the chemicals in the can linings. She microwaves things in glassware rather than plastic. She reads the labels on hand soap.

“My kids, I try to limit their exposure,” Connor said.

Researchers and governments have a tough balance to maintain when communicating the risks to the public. They still do not know much about the health effects of these chemicals. They do not want to cause undue alarm.

And even once better understood, the risks will need to be weighed against the benefits many of these chemicals also provide.

None of the dozens of experts interviewed recommended that people abstain from well water or swimming to avoid known or suspected endocrine-disrupting chemicals that have been found in lakes, rivers and groundwater.

At the same time, many of the researchers said they had begun trying to limit their own and their children’s exposures, taking a “better safe than sorry” approach.

“You have to be very careful to be waving the red flag and alarming people at that level, because that’s not what we’re talking about,” said Ferrey, a researcher who has found endocrine disruptors in lakes and streams across Minnesota since he started looking in 2007.

“On the other hand,” he said, “you have to be able to instill some of the disquiet that I feel about what these compounds might be doing at these concentrations.” 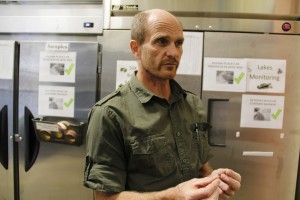 Minnesota Pollution Control Agency researcher Mark Ferrey has found trace amounts of suspected endocrine disruptors throughout Minnesota’s waters. He hasn’t tried to limit exposure for himself or his two older boys, “but if I had infants, I’d be much more careful about what they were exposed to.” Kate Golden/Wisconsin Center for Investigative Journalism

Some guidance has emerged.

The Wisconsin Legislature in 2010 banned BPA in baby bottles and sippy cups after the Milwaukee Journal Sentinel published an award-winning series, “Chemical Fallout,” on its risks. The U.S. Food and Drug Administration followed in 2012.

The Minnesota Department of Health, on its website, recommends that parents try to limit their children’s exposure to BPA and other “chemicals of special concern” in their homes. BPA can still be found in can liners and other plastic products.

Wisconsin’s state health officer, Henry Anderson, said he was not aware of any statewide purchasing changes in this state. The State Laboratory of Hygiene stopped buying soaps with triclosan, according to state lab researcher Jocelyn Hemming, an expert on endocrine disruptors. Contamination with triclosan could compromise some sensitive tests conducted there.

But thousands of other chemicals are also suspected of endocrine disruption, and far less is known about most of them. A report from the nonprofit Pew Health Group noted that most of the 80,000 chemicals in commerce “have not been tested for reproductive health effects.”

“It’s hard not to make people too worried about a lot of things,” said Connor, after running through a plethora of hypothesized health effects — genital abnormalities, tumors, lower sperm counts, diabetes, early puberty —†and an equally long list of worrisome chemicals. 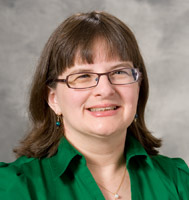 Endocrine disruptors meddle with the body’s signaling systems, which respond with exquisite sensitivity to tiny amounts of hormones like estrogen or testosterone.

“The endocrine system, whether it’s in us or in fish, really influences every part of our life,” said Vicki Blazer, a U.S. Geological Survey National Fish Health Research Laboratory scientist in West Virginia. “Whether it’s normal reproduction, growth, metabolism — and for humans, even more psychological and emotional kinds of things.”

But she hypothesizes that the intersex itself, while disturbing, may be just a red flag for the real problem: that the chemicals make fish more susceptible to disease.

And new, troubling findings suggest that low-level exposure may alter genes in offspring and subsequent generations, as a University of Wisconsin-Milwaukee researcher and others have found.

Occasionally, a toxic spill or contamination from PCBs or dioxins shows a “direct causal relationship” between a chemical and a health problem in humans or wildlife, said a 2009 statement from the Endocrine Society, the main professional organization of endocrinologists.

But more often, the group wrote, people and animals are exposed to a broad array of chemicals at low levels. More often, the cause is uncertain, the mechanisms and effects poorly understood. Many of the possible problems, such as lower sperm counts or obesity, are highly controversial.

The Endocrine Society’s 2009 statement concluded that assessing exposures and finding who is most at risk should be a “high priority.”

Fourteen scientists in 2011 called for a national research program to investigate the risks of these chemicals.

They cited a “large but incomplete patchwork of disconnected studies” that has left the nation “underprepared to assess and confront what some believe could be a public and ecological crisis.”

“There’s so much that needs to be done,” said Angela Bauer, a human biology professor at the University of Wisconsin-Green Bay who has studied endocrine disruptors.

In the meantime, she said, she stopped using plastic wrap and scoured Target until she found some triclosan-free soap. “For a while, I was making my kids use bar soap,” she said.

Ferrey said he has not tried to limit his own exposure or that of his two older boys, “but if I had infants, I’d be much more careful about what they were exposed to.”

Dana Kolpin, who runs the U.S. Geological Survey’s emerging contaminants project and has found them in streams and groundwater nationwide, said, “I still go to the water fountain and drink,” noting that water in plastic bottles may not be safer.

“What I have changed,” he said, “are my buying habits.”

Every now and then Connor, the pediatric endocrinologist, will see a child born with some genital birth defect, and wonder whether exposure to endocrine disruptors might have caused it —†or something else, like an as-yet-undiscovered gene.

But unless the family knew of a particular abnormal exposure to something, she said, it would be a “fishing expedition” to try and find the cause. The science is just not far enough along.

Complicating the search, she knows, is the fact that people live in a world of chemicals.