Plus: A national green award for The Brewery; and bringing fruit trees to Walker's Point.

Historic Milwaukee, Inc. held their annual “Remarkable Milwaukee” fundraiser in the Grain Exchange Room at the Mackie Building on Monday night. This year, the group honored Conrad Schmitt Studios and the legacy of Bernard O. Gruenke.

Serving as the Master of Ceremonies, Historic Milwaukee Executive Director Anna-Marie Opgenorth drew applause for her review of the organization’s accomplishments.  The third annual Doors Open Milwaukee will return this year on September 21-22. More than 15,000 people attended last year’s two-day event, although I’ve yet to confirm if that total included President Barack Obama who bisected the event when he traveled between the airport, US Cellular Arena, and Henry Maier Festival Grounds as part of a multi-event campaign stop. 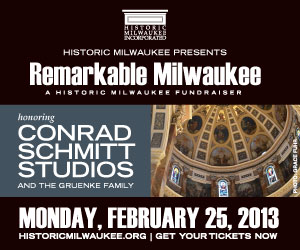 Milwaukee Mayor Tom Barrett, giving at least his second speech of the day following that morning’s State of the City, welcomed everyone to the event and voiced his support for historic preservation. Following up on his extensive mention of the Milwaukee Streetcar in the State of the City, Barrett noted (to audience applause) that the streetcar will help connect Milwaukee’s historic assets to build a stronger city.

The video below highlighs the work of Conrad Schmitt Studios. The narrator of the video is Cardinal Timothy Dolan’s brother, Bob Dolan.

Green Award for The Brewery 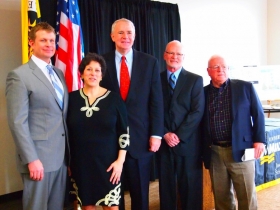 The Brewery, the neighborhood taking shape in the former Pabst Brewing complex on downtown’s northwest side, continues to get more recognition. Yesterday, the United States Green Building Council awarded it the designation of LEED Platinum for Neighborhood Development, the highest certification available and one received by only two other neighborhoods in the United States.

The award is not in recognition of a one-time environmental good deed, but instead a conscious effort since 2006 when the late Joseph Zilber acquired the formerly blighted property and announced a plan to redevelop it in the most environmentally responsible way.

LEED, which stands for leadership in energy and environmental design, is a rating system given to buildings, homes, and neighborhoods.

Individual developments at The Brewery have received recognition as well. Also receiving LEED certification yesterday was the UW-Milwaukee’s Zilber School of Public Health. Dean Magda Peck was on hand to accept the award. The development received LEED Gold, the USGBC’s second highest rating. The parking structure at The Brewery has also received LEED Gold approval in the past.

Hats off to The Brewery development team. Now it’s time to apply the best practices from the development on a city-wide basis. – Jeramey Jannene

A notable effort to bring fruit trees and bushes to Walker’s Point involves a number of community partners with a goal of bringing fresh fruit options to the neighborhood.  To help accomplish this, the team entered the Victory Garden Initiative’s “The Fruity Nutty Five Contest.” Walker’s Point was just one of six neighborhoods to win (despite the contest’s name, there were six awards given rather than five) and the award included 30 fruit and nut trees and bushes.  The other winning neighborhoods teams represent 45th Street, TippeCanoe Park, Metcalfe Park, Riverwest (Booth Street), and DMZ Community Garden (Borchert Field).

The Walker’s Point team is unique: it was able to get the Milwaukee Department of Public Works to agree to allow two of the fruit trees to be planted within the the public right-of-way, on the green strip between sidewalk and street. This is a first for Milwaukee and hopefully not the last. The trees will be planted this spring.

For more information on the project see the video below:

Ever since Dave Schlabowske, the Bike Czar, stepped down as the City of Milwaukee’s Bicycle and Pedestrian Coordinator to take a position with the Bicycle Federation of Wisconsin, a search has been underway to find a suitable replacement.  Urban Milwaukee has learned the position has finally been filled. Kristin Bennett a Senior Transportation Planner at the City of Colorado Springs has accepted a job offer.  She was involved with developing that city’s first bicycle map, implementing over 100 miles of new bike markings, bringing on-street bike corrals to Colorado Springs, and she recently was named 2012 Professional of the Year – Public Sector by the Association of Pedestrian and Bicycle Professionals. – Dave Reid