A lawyer who knows five languages, collects decorative glass and is working on a cook book, his life has been a long adventure.

“Oh, what a night, late December back in ’63,” intones Attorney Jeff Murrell, who might be quoting the song by the Four Seasons, though he denies it.  In truth, he actually was born on a December night in ’63 in Los Angeles, where he wishes “we would have stayed,” but his parents, it seems, had other plans.

They split when he was about five-years-old, the result being that his mom moved back to Lincoln, NE (Jeff describes it as the “frozen cornfield-tundra”), and his dad moved to New Orleans, where he worked off-shore oil rigs until he “got his head busted open on one, and was disabled to an extent.” It gets worse. “Dad then moved to Waveland, Mississippi and bought a little cracker-box of a house on the gulf coast,” Jeff says. Six months before Katrina (2005) wiped out his father’s house and much of the small town of Waveland (which was ground zero for the hurricane ), he died of lung cancer. “I guess that was good timing on his part, right?” Murrell muses.

He speaks of his high-school years as “classified,” saying only that he was bullied, which influenced him to champion justice as an adult. “The lawyer thing, is a really good way to kick some bullies’ asses in the grown-up world.” 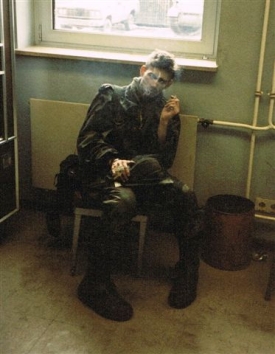 Jeff Murrell in the Army

In 1982, he graduated from high school and immediately enlisted in the Army, where he spent a half-a-decade in Texas and in West Germany, the latter as a Russian linguist, forced to sit for hours at a time in freezing cold, concrete bunkers, while listening to “poo-brained Soviet tankers and infantrymen cussing at each other over their radios.” Though there was a high demand for Russian linguists and a short supply of them during those Cold War years, Murrell was promoted only as far as Sergeant. To this day, he says, Russian is his “favorite language to forget.”

But our lives can take strange turns. He handled some paperwork for a car he sold to another soldier and the military lawyer who looked it over told Murrell he did a good job. “If it was that easy, I figured I could get out of the army and become a lawyer!”

Still, quitting the army in 1988 wasn’t easy. It took leap of faith to “release oneself from the teat of a military career with all the free food, housing and comprehensive healthcare, to transition back into civilian life with none of those benefits, except VA medical,” he says. Murrell moved back to New Orleans and, in three-and-a-half years, earned a BA in Foreign Language Education with honors from the University of New Orleans. 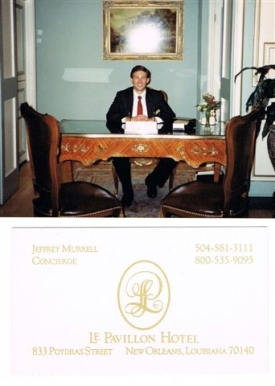 Jeff Murrell working as a concierge in New Orleans

His college-era jobs included being a bellman, and then a concierge at a high-end hotel in downtown New Orleans. The latter job was brief due to an excess of honesty: Murrell (and other members of the New Orleans’ Concierge Association) recommended that their respective guests not patronize a certain restaurant they all thought was not up to par. Nevertheless, one of the guests took his wife to dinner there, and told the restaurant’s owner about the concierge’s opinion, and the owner then threatened to sue the hotel. Murrell was fired.

Which merely meant another chapter in his life story would commence. “Thanks to friends in high places,” he says, “I was offered a job as an art consultant working strictly on commission in a Royal Street gallery, but it didn’t pay the rent, so I was forced to take a regular-paying job as an interpreter at the New Orleans International Airport.” He was qualified by then to interpret five languages (English, Spanish, French, German, and Russian) but was paid just $4.99 per hour, and still wonders today why his bosses couldn’t have upped the ante by a penny, so he could at least say he was making $5 per hour. 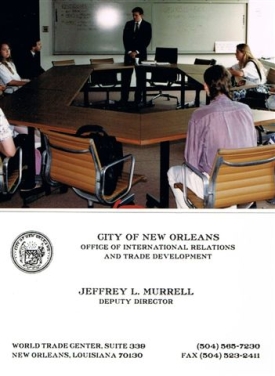 However, that job brought good fortune when he was able to assist the city’s Director of International Relations and Trade Development with the arrival of an ambassador from Japan, making an official visit to New Orleans. Murrell handled this so well he was offered the job of Deputy Director when he finished college. He accepted, only to lose the job after a year.  “No one warned me that political etiquette required our resignations once the mayor’s term limits were up,” he says. “Live and learn.”

So he revived that idea about being a lawyer, applying to mostly Jesuit law schools and was accepted by Marquette. He had no idea where Milwaukee was located when moving here in 1992.  He knew the city only from Laverne and Shirley, but “I thought it was somewhere around the mid-Atlantic, like New Jersey or Pennsylvania.”

After graduation in 1995, Murrell worked for two years with a downtown Milwaukee law firm, Gerald R. Turner & Associates, S.C. On July 4th, 1997, he declared his independence and hung up his own shingle, mostly handling bankruptcies. He is also “of counsel,” with Miller & Miller Downtown, but for his own practice works out of the Farwell Avenue home he shares with his art educator/writer spouse, Kat, and two cats. “You can’t beat the commute,” he says. On good days, he can walk to and from the federal courthouse when he has cases there. He loves the bike paths along the lakefront and recently picked up a child-bike carrier at a rummage sale, for transporting the family cats.

When he’s not helping people out of financial quicksand via Chapter 128 or publishing articles in law periodicals, he volunteers his services to the Wisconsin State Public Defender and the Federal Defender of Wisconsin (they appoint private attorneys to help them handle the load of clients who are indigent).

Murrell also loves to cook, the joy of which he first experienced via Creole dishes his dad and others taught him. If you have a yen for bull’s meat, you might like his current favorite: Toro con Tomate, a stew he first tasted in Cordoba, Spain. He’s eaten alligator, frog legs, chicken gizzards, chitterlings, fried grasshopper, stinky durian fruit, ostrich, kangaroo, and pigeon prepared in Cairo. “Tastes like turkey,” he says. With the help of his wife, Kat (she’s Visual Arts Editor for Third Coast Digest), he hopes to publish a cookbook with the tentative title of “Around the World in 80 Dishes for Two” — 80 recipes, two servings each, culled from prominent cultures. The book is a response to the 2010 United States census, which shows two-person households families are steadily growing and make up the norm. “Too many leftovers that eventually get wasted,” he says. 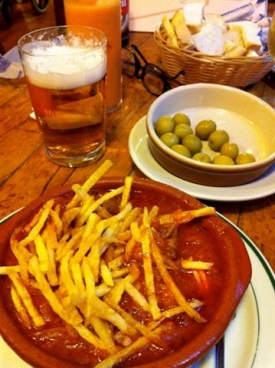 There’s more. “I have become a unique expert of sorts (i.e., obsessed), with the Eames-era decorative glassware once produced by a little-known company called Culver, that started out in Brooklyn. I wrote an article about this glassware for the 2012 spring quarterly issue of the magazine, All About Glass.” He’s currently putting together a comprehensive collector’s manual, and if you go to his website, you can follow his craze.

So here’s a chap who detests PayDay loan sharks for charging “immorally high rates of interest,”  who takes great satisfaction helping folks get out of deep trouble, who understands many simply cannot afford to retain an attorney, and has taken the unusual step (among attorneys) of offering “affordable, monthly payment plans for fees.”

Forget about all those crummy “Lawyer” jokes. They don’t apply. This one-time victim of bullies is standing up for the little people, and makes a mean bull meat stew. Did we mention he’s going to learn Mandarin Chinese?