A 2006 report resulted in a restructured Fire & Police Commission. Just what changes are left to make?

By Mark Doremus, Milwaukee Neighborhood News Service - Dec 17th, 2012 10:11 am
Get a daily rundown of the top stories on Urban Milwaukee

In the wake of the Richard Schoen affair, there have been protests and calls to change the Milwaukee Fire & Police Commission.

The controversy arose after the commission overturned Police Chief Ed Flynn’s decision to fire officer Schoen for excessive use of force. The commission soon reversed itself on procedural grounds and upheld Schoen’s firing.

Still angry about this, critics are demanding the commission be restructured so it’s more accountable to the public. But how, exactly, would this be accomplished? 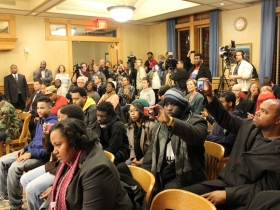 Milwaukee Alderwoman Milele Coggs, and others, have called for new members of the commission to be “vetted” by the public. But under current rules, the Common Council must approve the mayor’s appointees, so the public, through the council, already has veto authority over who serves on the commission.

Among the other ideas that have been tossed around is that the police chief should have the right to appeal commission decisions to a higher authority. But the whole idea of having a civilian commission is to constrain the chief’s power.

Others have suggested the mayor should sack everybody on the commission and start over with new members, or set up a new, parallel committee to police the Fire & Police Commission. But what would make a new or parallel commission any better than the current one?

Finally, there is this suggestion from a Milwaukee Journal Sentinel editorial of December 7: “It’s time to consider restructuring the commission and providing better accountability.” But the editorial offered no specific suggestions on how to accomplish this.

All of this may elicit a sense of déjà vu from those who remember a 2006 comprehensive study of the commission by an outside consultant. The study cost $160,000 and was paid for by the Helen Bader Foundation and the Greater Milwaukee Foundation. Its goal was to consider any ways to restructure and improve the commission.

The report, entitled “Promoting Police Accountability in Milwaukee: Strengthening the Fire and Police Commission,” concluded, ominously, that “the Fire and Police Commission has not realized its potential as a police oversight agency” and recommended numerous changes to its structure and functions. Among the key recommendations that were implemented:

“Recommendation 3.4: The commission should be taken out from under the city’s Department of Employee Relations and be restored to full autonomy, with its own budget.” This has happened. The commission is now under the mayor.

“Recommendation 3.6: The commission staff should be expanded.” Done. The commission now has eleven staff members, with another soon to come on board, according to Mike Tobin, executive director of the Fire & Police Commission.

“Recommendation 6.2: The commission should engage in research and review of police policy and patterns.” The commission does review and recommend policy. In fact, as Tobin notes, the Schoen controversy overshadowed a very important commissionpolicy initiative: changes to the police department’s Use of Force Standard Operating Procedure.

The changes added focused strikes by officers, diffused strikes and decentralizations (take-downs) to the actions that require a supervisor to complete a formal use of force report. They also added a duty to intervene when a police officer observes another officer using force that is “clearly beyond that which is objectively reasonable under the circumstances.”

According to Tobin, an incident last April triggered that second policy change. Tobin said he was concerned about an officer who struck a suspected drunken driver twice in the face with a closed fist while the driver was face down on the pavement.

A cell phone video shows that other officers were present but did not intervene when the officer, Eric Ratzmann, struck the suspect in violation of departmental training, which teaches officers not to hit a suspect in the head when he’s lying prone on the ground.

The changes to the use of force doctrine were approved by the commission on December 6 and will take effect Jan. 1, 2013.

“Recommendation 7.1: The commission should include a public comment period on its agenda.” That was implemented, and we’ve seen the results in the criticism of commissioners at recent meetings.

“Recommendation 7.4: The commission should improve its public reports.” The commission’s annual report is now longer, more detailed and prettier than it used to be.

There were also key recommendations that weren’t implemented, largely because they would have reduced the commission’s power:

“Recommendation 3.1: Don’t investigate citizen complaints or internal allegations of misconduct; let the police department do that and just monitor its performance.” This would would have weakened the commission, and as Tobin notes, would not have been allowed by state law. Under
the law, the commission is expressly charged with hiring the fire and police chiefs, overseeing and approving the selection of other officers, hearing appeals of disciplinary actions and conducting at least an annual review of departmental polices. That, Tobin observes, makes for a commission that’s a uniquely powerful citizen body with real control over how cops and fire fighters do their jobs.

“Recommendation 4.1: The commission should stop receiving citizen complaints and leave those to the fire and police departments.” This recommendation, too, would have weakened the commission and was not accepted. On the contrary, the commission staff has been expanded to expedite complaint processing. And to further support the commission’s review of citizen complaints, the executive director has unlimited access to information from police and fire department internal investigations. “Access to records is a matter of constant conflict in other jurisdictions,” says Tobin. “We don’t have that problem.”

Given this report’s rather thorough review of the commission, are more improvements needed? Perhaps, but it remains for critics to offer specific suggestions.