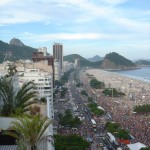 Urbanized, the third film in Gary Hustwit‘s design trilogy, shows the greatness and failures of city planning through vivid cinematography and informed speakers.  The film bounds from Bogota to Detroit and issue to issue giving viewers a background history of urbanism, while introducing the concept as a global issue.

For someone not familiar with the topics involved in urbanization, the film acts as a primer to begin the understanding of cities and urbanism.  It gives an introduction to topics such as sanitation, poverty, livability, transit, bicycling, participatory development, and historic preservation.  Enough of an introduction to spark ideas and conversation, but not enough that it makes the conclusions for the viewer.

For urbanists it covers the typical field while bringing a spotlight on the implications of worldwide urbanization, through stories of and by significant figures in urban planning and architecture.  It touches on the familiar history of Jane Jacobs and walkable mixed-use neighborhoods, and the legacy of Robert Moses’s age of the automobile that comes to an all too sad vivid conclusion in the City of Brasilia.  It then connects urban planning figures of the past to the modern day planning of Jan Gehl, as he eloquently explains the failure of not planning for humans.

In each city that the film stops in, it introduces a new idea or concept expanding the viewers understanding of urbanism.  In Bogota it brings the TransMilenio Bus Rapid Transit system to life, and shows how the building of dedicated bicycle facilities have helped connect the urban poor with the center city.  In Detroit the film puts a spotlight on urban agriculture, and how it is helping to turn neighborhoods around.   In Cape Town it exposes the viewer to the depths of poverty and the issues of crime and violence, while showing how a simple urban design project has already effectively reduced crime.   These were just a few of the cities the film stops in, and each city has a lesson and something to learn.

What might be the most valuable merit of this film is that it avoids the pitfalls of many of the films about urbanism, which come across to the viewer as preaching, and can be off putting to non-urbanists.  This film is informative, and although it never seemed to make a conclusion, it sparked conversation and generated ideas.  Well worth watching.