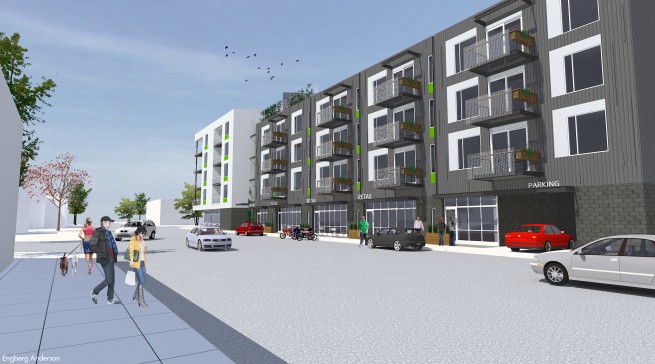 HKS Holdings LLC. proposal for a $12 million mixed-use apartment building in Bay View was recommend for approval at the December 6th, 2010 City Plan Commission meeting.  The 5-story building, to be located on the southeast corner of Kinnickinnic Ave. and Conway St., would include 70 loft apartments, 9,000 square-feet of first-floor retail, 71 underground parking spots, and 14 additional parking spots dedicated to retail use.

Eric Ponto, from Engberg Anderson explained the design and how it addresses the pedestrian environment.  Along Kinnickinnic Ave. the building will be setback to allow for wider sidewalks, and along Conway St. walk up units will hide the parking.  He added that they wanted the corner to be the “icon of the development.”  The building’s materials include a synthetic cast stone block and cement panels, while the balconies will be stainless steel with Ipe wood caps.

The development group is seeking WHEDA financing for a portion of the project, which would require 20% of the building to consist of affordable rental units.

There was some opposition to the project by a couple of community members.  Greg Bird went so far as to say “the design is boring,” and another neighbor arguing against the gentrification impacts of a project like this saying Bay View isn’t the Third Ward and “we are not that classy.”

This proposal will now before the Zoning, Neighborhoods & Development Committee on January 11th UPDATE December 17th. If approved by ZND, the proposal will go before the full Common Council.