Critics claim the goal is unrealistic and his jobs plan as lacking and juvenile. Walker counters this criticism with a little faith and some history. Wisconsin has bounced back before. In his victory speech he said that back in 1985, Wisconsin was facing “nearly identical circumstances,” losing nearly as many jobs then as now. Wisconsin was able to overcome the job losses with the election of Tommy Thompson, who governed over an increase of nearly 268,000 new jobs.

How accurate is this claim? And can we rely on Walker’s policies to get us there? 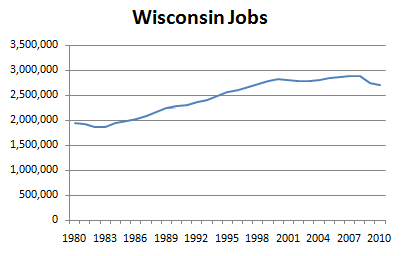 In contrast, between 2007 and today, Wisconsin lost over 171,000 jobs and unemployment increased over 5% during the “Great Recession.” 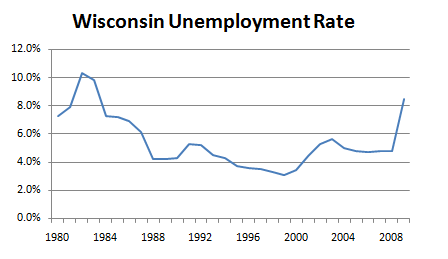 Given the differences in the two recessions, Walker’s claim about “nearly identical circumstances” seems a little out of touch empirically. The economic tide began to turn in Wisconsin far before Tommy Thompson became governor. In fact, the bulk of Wisconsin’s economic recovery occurred during former Democratic Governor Tony Earl’s term.

What explains the increase in jobs? The Wisconsin Taxpayers Alliance offers a clue in their September report. They suggest that a significant expansion in the workforce, especially among working women, fueled the state’s job growth during that period. However, while Wisconsin experienced steady job expansion during Thompson’s terms in office, Wisconsin’s job growth still lagged behind the national average. Moreover, Thompson nearly tripled the amount of state spending during the 1990s (which I’ll return to in a little bit).

In his victory speech, Walker pointed to policies such as reducing (governmental) regulation, less litigation, and repealing the state’s law on health savings account to get us to the 250,000 jobs mark. In other forums he’s flirted with the idea of repealing the state’s tax on corporations. Can these usher in a new era of Wisconsin job growth?

Now, I can’t speak for most economists, but it’s important for readers to know that job creation doesn’t necessarily follow tax cuts per force. In fact, I’m constantly flustered at how this claim continues to seduce voters. See here for an example of how county tax cuts haven’t impacted the county unemployment level.

Job creation models are based on fancy statistical regressions that show how change in one factor can lead to change in the other – keeping every other variable constant. Specifically, tax cuts can lead to job growth only without changes in any other factors, such as state spending levels. With significant cuts in state spending levels, tax cuts will wash, and job creation won’t follow. In many cases, governmental spending is more important that tax rates in creating jobs (see here for an example of how government spending on roads leads to decreases in the unemployment level).

Overall, Walker’s optimism is somewhat grounded in reality (rebounds can happen!), although some important specifics are off.

I just hope that hope policymakers remember the lessons about the conditional impact of tax cuts and state spending. Significant cuts in education, health care, municipal services, and infrastructure can negatively impact job creation in the state – even if major tax cuts occur. If Walker really wants to follow in Tommy Thompson’s footsteps, then he’ll use strategic tax cuts without slashing services.

John Kovari is a Ph.D. candidate in political science at the University of Wisconsin-Milwaukee and the 2008-2009 Norman N. Gill Fellow at the Public Policy Forum. Additionally, he has served as a legislative assistant to city of Milwaukee Alderman Michael Murphy.

Republicans Listen to Special Interests instead of Listening to Wisconsinites by State Sen. Melissa Agard