March 29, 2010
Lecture by Léon Krier
March 29, 2010 4:30 pm to 6:00 pm
Léon Krier, born in Luxembourg, is an architect, architectural theorist, and urban planner. From the late 1970s onwards, Krier has been one of the most influential neo-traditional architects and planners. He is best known for his development of Poundbury village in Dorchester, UK for the Prince of Wales. In campaigning for the reconstruction of the traditional “European” […]
March 30, 2010
Public Works Committee Meeting
March 30, 2010 9:00 am
The Public Works Committee is responsible for physical services provided by the city such as street and alley maintenance, waste collection, disposal and recycling, sewer, water and flood control projects, assessments, public buildings, land and waterways.

Public Works Committee meetings start at 9:00 a.m. and are held in the Room 301-B, City Hall, unless otherwise noted.[…]

See what’s in store for Lakeshore State Park at a great waterside location. 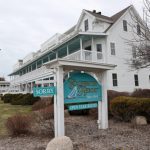