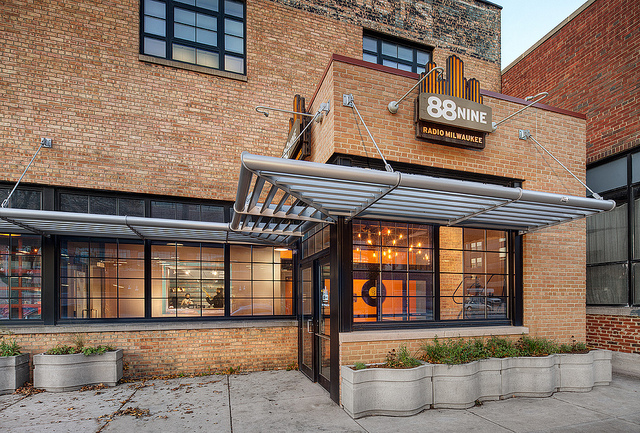 The 88Nine Block Party is being held to mark Radio Milwaukee’s 10th year on-air, online and in the community. The station (WYMS 88.9-FM, www.radiomilwaukee.org) launched Feb. 26, 2007.

The event is being presented by Educators Credit Union, celebrating its 80th anniversary this year, and is in partnership with the Pabst Theater Group.

The block party is free and open to the public. The event runs from 1:30 p.m. – 10 p.m. It takes place outside Radio Milwaukee’s home at E. Pittsburgh Ave. and S. Barclay St.

In addition to enjoying on-stage entertainment, attendees can spend time in Workshop Architects’ recently renovated Studio 1, where they can contribute to the 88Nine Block Party playlist, play a round of Milwaukee-themed games and get to know their neighbors.

Several interactive art installations, designed by Workshop, will take place throughout the festival grounds, and local food vendors will offer a variety of items.

The VIP experience will include two complimentary food servings, access to two private indoor bars, special sessions and interviews with headliners and admission to the VIP After Party in the 88Nine building and on the roof from 10 p.m. to 12 a.m.

88Nine encourages attendees to bike or use public transportation or ride-sharing to get to the event. A pop up Bublr Bikes bike-share kiosk will be located on Barclay St.

Over its 10 years, Radio Milwaukee has become recognized for its unique mix of new and Milwaukee music, its Community Stories features and for fostering community engagement and positive change. Since it began broadcasting, Radio Milwaukee:

ABOUT 88NINE RADIO MILWAUKEE:
A non-profit, community-funded radio station, 88Nine Radio Milwaukee (WYMS-FM 88.9) has been a part of Milwaukee since 2007. Learn more about 88Nine and stream the station at http://www.radiomilwaukee.org or via the 88Nine mobile app.