"I am proud to again sponsor the House version of this strong, bipartisan bill."

Washington, D.C.—Today, Congressman Jim Sensenbrenner (R-WI-05) and Senator Chuck Schumer (D-NY) reintroduced companion versions of the Disability Integration Act to help ensure the full integration of Americans with disabilities into communities across the nation. Advocacy groups, including the Center for Disability Rights, ADAPT, and the American Association of Retired Persons (AARP), joined lawmakers for a press conference to highlight its importance to the disability community.

“I apologize that I cannot be with you today, as I am currently recovering from hip surgery. I want to pass along my thanks for all of the important work that the disability advocates have done to garner support for the Disability Integration Act. I am proud to again sponsor the House version of this strong, bipartisan bill. It will help ensure that individuals with disabilities have equal rights and opportunities.

The progress we have made since President George H.W. Bush signed the Americans with Disabilities Act is remarkable. In particular, I am proud of my wife, Cheryl, who has worked tirelessly on behalf of the disability community, and I was honored to stand with her behind President George W. Bush as he signed the Americans with Disabilities Amendments Act in 2008. Still, there is much work to be done to strengthen laws to protect individuals with disabilities. I again thank the thousands of advocates who came to Washington D.C. this week, especially those from my home state of Wisconsin. You inspire us to continue pushing on, and I look forward to working together to advance our efforts.” 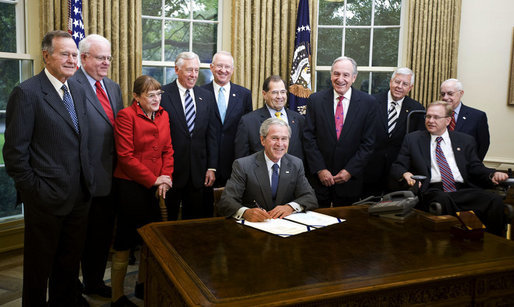 The Disability Integration Act would, in effect, add teeth to the Supreme Court’s Olmstead decision, which first set out the principle that these services aren’t just benefits, but that they are the practical embodiment of the right to independence for people with significant disabilities.