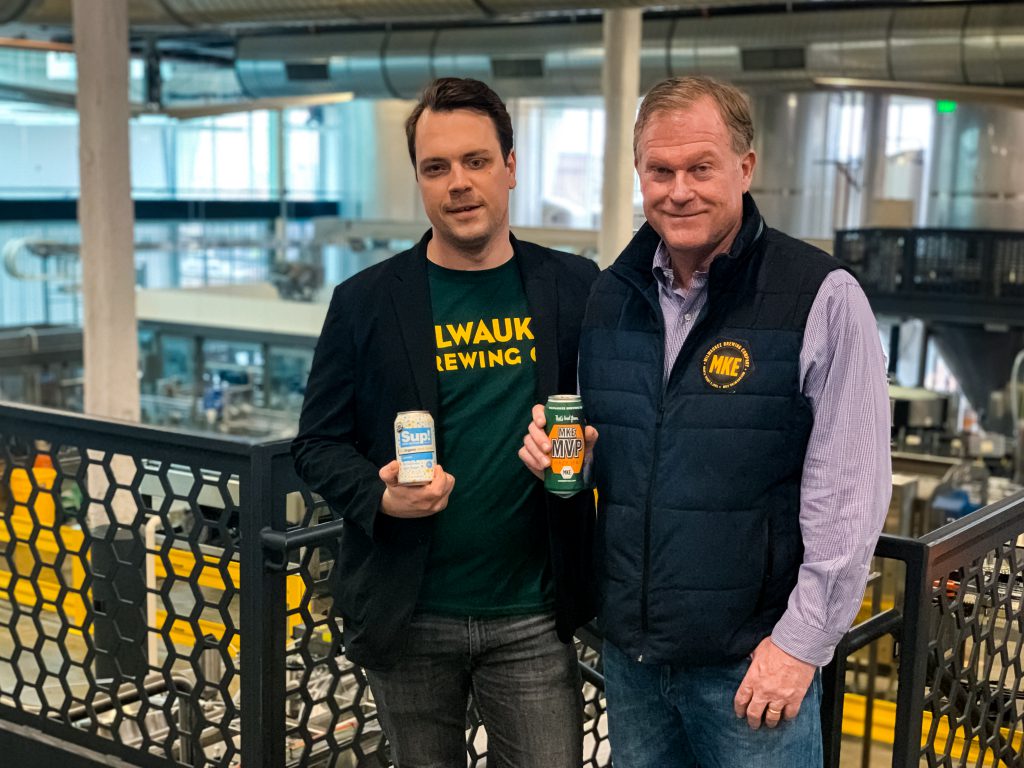 MILWAUKEE – A new force is emerging from one of the alcohol industry’s most storied cities. Founded by the teams behind Milwaukee (MKE) Brewing Company and Sup! Organic Hard Seltzer, Drink Design Collective (DDC) is a new alcoholic beverage company focused on innovation across the alcoholic beverage space. MKE Brewing Company’s David Hock will be President and Chief Executive Officer of DDC and Sup! Organic’s Chase Brooks will serve as Founder and Chief Innovation Officer.

Drink Design Collective represents an evolution in an industry with centuries of history in Milwaukee. A mainstay in the Wisconsin market for more than 22 years, MKE Brewing Company is a Wisconsin pioneer of the craft brewing industry. The 20,000bbl brewery recently expanded its operations into a new, state-of-the-art facility in a former Pabst Brewing Company warehouse, which was intentionally built to allow MKE Brewing Company to innovate outside of the craft beer space and will allow for over 150,000bbl of annual capacity. The partnership brings together decades of traditional brewing, distribution and sales experience with an innovative approach, a portfolio of new products and an increased focus on marketing to new targeted customer segments.

Drink Design Collective is headquartered in MKE Brewing Company’s modern facility, which was built to maximize efficient water use in the brewing process. This will allow for in-house production of Sup! Organic Hard Seltzer, Tierra Buena Hard Seltzer, the company’s next brand launch, and MKE Brewing Company’s expansive line of craft beers. Production was a key driver of the partnership, as it filled available brewing capacity at the Milwaukee facility and eliminated the need for contract brewing for Sup! and Tierra Buena.

“Rapid innovation is central to our vision, and this facility provides the perfect environment to quickly dial in future product lines,” said Chase Brooks, Founder and Chief Innovation Officer of Drink Design Collective. DDC is in the process of retaining distilling and winemaking licenses in addition to its current brewing license, enabling the ability to develop products across total alcoholic beverage.

DDC’s founding will be marked by several new product launches in Wisconsin and through larger regions of the U.S. Sup! Organic Hard Seltzer came on the radar in early 2019 in Boston and New York City and has since secured massive chain grocer support, resulting in a spring rollout across 20 states in the eastern and central U.S. After launching Sup!, the first organic hard seltzer to hit the market, the company has gained unprecedented momentum in a hyper competitive space and has shown exceptional performance in early markets, including Austin, Boston and New York City.

DDC’s next brand launch, Tierra Buena Hard Seltzer, will hit pilot markets in spring 2020. Tierra Buena is the industry’s first-ever climate neutral certified product and will offset 100% of its environmental impact via reforestation projects in Latin America. The product boasts the inclusion of Vitamin C and antioxidants in four Latin American-inspired flavors: Spiced Mango, Mixed Berry, Agave Lime and Strawberry Kiwi Lemonade. Tierra Buena, which already has the support of Kroger in key test markets, will be piloted in Boston, New York City, Chicago and Wisconsin before a widespread rollout later this year.

Hock – who brings 30 years of vast brewing and distribution experience, formerly as Vice President of Beechwood Sales and Service with Sheehan Family Companies and currently as President and CEO of Milwaukee Brewing Company – and Brooks have assembled a team with a great depth of traditional experience and a shared innovative mindset. DDC tapped Josh Allard, previously of Constellation Brands, as VP of Sales; Kevin Barefoot as VP of National Accounts; and Greg Deuhs, previously of Pabst, as VP of Operations. The team has already produced impressive results, gaining spring 2020 mandates with the likes of Kroger, Publix, HEB, Jewel Osco, Harris Teeter and signing distribution contracts with many of the nation’s largest distributors, including Lakeshore Beverage, Silver Eagle, Sheehan Family Companies and more.

“Chase and I share an exciting vision for the future of alcohol innovation at DDC,” says David Hock, President and Chief Executive Officer of Drink Design Collective. “We’re building a team that follows the path of strong beer distribution businesses and aim to lead the industry when it comes to bringing new brands to market.”