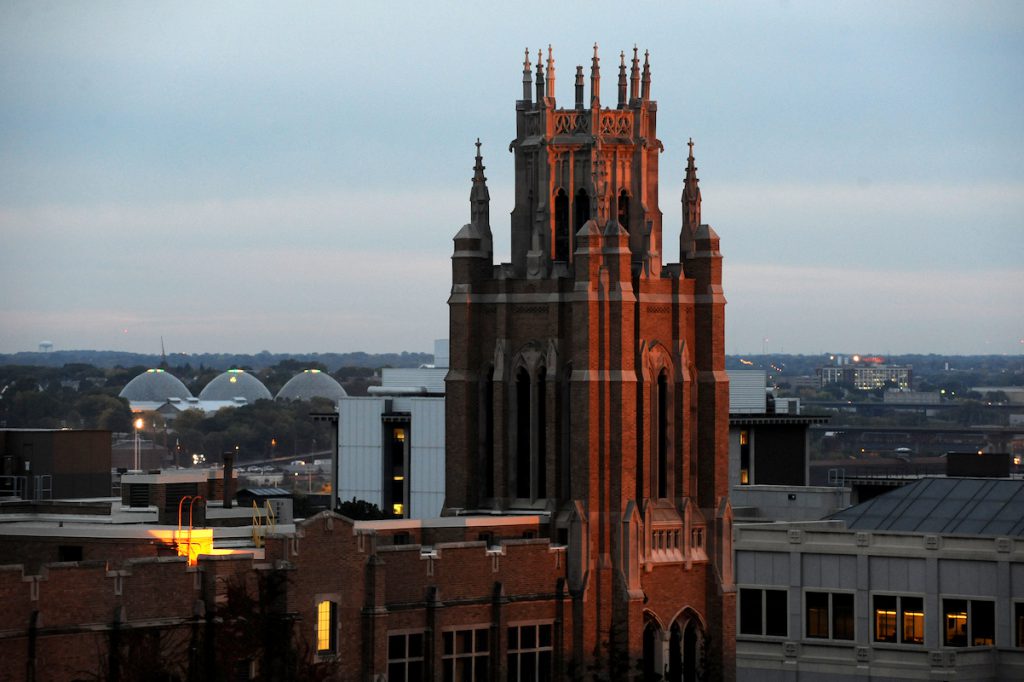 MILWAUKEE — President Michael R. Lovell today announced the public launch of Time to Rise: The Marquette Promise to Be The Difference — a bold, $750 million comprehensive fundraising campaign that will elevate resources to advance the university’s mission and pillars of excellence, leadership, faith and service.

The campaign, the most ambitious in Marquette’s 140-year-history, has been privately gaining momentum since its start in July 2016. Since then, the university has raised $453 million, securing 60 percent of its overall goal. Nearly 50,000 donors have already supported Time to Rise, including 42% of donors making their first ever gift to the university.

More than 500 donors have committed $100,000 or greater in that period, including more than 90 donors who have gifted $1 million or greater. Alumni support has also increased from 13% at the campaign’s outset to 18% this year with a goal of maintaining 20% or greater by the close of the campaign.

“We are incredibly inspired by the growing support from our Marquette community and the way they have risen to every occasion to invest in Marquette today and help to secure our future,” President Lovell said. “We have persevered through challenging times, and we have a firm foundation to build upon, thanks in large part to the generous contributions of our community.”

Lovell emphasized the campaign’s importance in driving Marquette’s strategic plan, Beyond Boundaries. The campaign, he said, empowers Marquette to pursue its stated vision to be among the most innovative and accomplished Catholic, Jesuit universities in the world.

Anchored by four objectives, the campaign priorities are as follows:

“Time to Rise is our call to action to launch a galvanizing campaign and turn it into a sustainable philanthropic movement,” said Vice President for University Advancement Tim McMahon. “We are witnessing the power of what our special community can accomplish when we come together in this pursuit to realize our undeniably bright future for Marquette.”

Campaign giving has continued to progress at Marquette. In February 2021, President Lovell announced four major gifts, including a transformational $31 million gift to the College of Nursing. The university also broke ground last month on its new home for Marquette Business and innovation leadership programs – the largest fully funded donor project in Marquette history. In addition, since the pandemic emerged, donors have contributed more than $1 million to student financial aid through the Bridge to the Future Fund.

Time to Rise is a campaign across all gift levels to create a culture of giving for generations to come.  It is championed by National Campaign Co-chairs Chuck and Karen Swoboda and Mary Ellen and Dr. Scott Stanek. They have led through their own philanthropy as well as by directing a worldwide network of regional and affinity-based volunteers.

“Marquette is where it all came together for us,” said Mary Ellen Stanek, managing director and chief investment officer of Baird Advisors and president of Baird Funds. “While this is a time of uncertainty, we see great opportunity to help the next generation forge their best path forward. Far beyond our time on campus, Marquette instilled life-long values and a sense of purpose that we carry within us today.”

Mary Ellen Stanek served as chair of Marquette’s Board of Trustees from 2006-09 and graduated from the Klingler College of Arts & Sciences in 1978; Scott in 1977, followed by his Doctor of Dental Surgery degree in 1982.

“We have had 18 family members receive more than 27 degrees at Marquette and we’ve seen the life-changing impact of their education,” Scott Stanek said. “We want to open doors for all students who aspire to attend Marquette.”

Chuck Swoboda, who served as chair of Marquette’s Board of Trustees from 2012-14, graduated from the Opus College of Engineering in 1989; Karen in 1990.

“The Marquette experience creates an incredible sense of community and connection,” said Chuck Swoboda, president and CEO of Vast Therapeutics and retired chairman and CEO of Cree. “Throughout our history, we have a distinctive heritage when it comes to developing mission-driven, ethical leaders who work to find solutions to the world’s most pressing problems.”

“We’re inspired by the many Marquette students who give of themselves on campus through service, and we see this campaign as our opportunity to give back,” Karen Swoboda said.

President Lovell emphasized that the generosity of alumni, parents and friends will continue to drive future success.

“Our Marquette family has stepped forward time and again to lead amid uncertainty and to lift others up. That’s why I am so energized by the launch of Time to Rise. It truly is our ‘promise to Be The Difference.’”

For more information on “Time to Rise: The Marquette Promise to Be The Difference,” visit the campaign website at: TimeToRise.marquette.edu.