Is Wisconsin entering a recession? 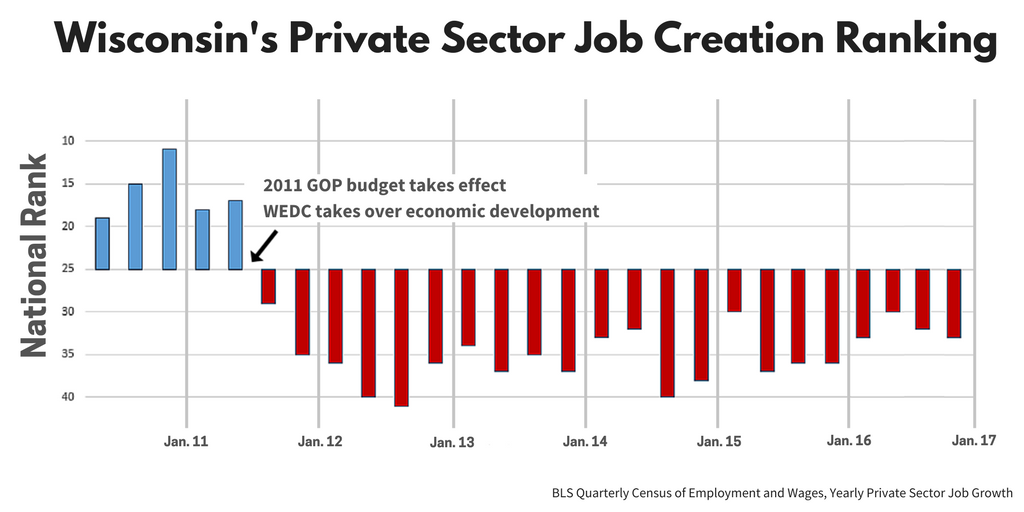 MADISON, WI – As Gov. Walker prepares to campaign with Pres. Trump in the coming days, another stinging jobs report highlights the economic turmoil that has resulted from six years of complete Republican control in Wisconsin. The latest ‘Gold Standard’ job numbers from the federal Bureau of Labor Statistics show Wisconsin wages fell by 1.3 percent in 2016 as the state lost 3,784 manufacturing jobs and dropped to 33rd in the nation for private sector job creation.

“Too many good-paying jobs are leaving Wisconsin as Republicans cut funding from local schools, increase health care costs and ignore our crumbling infrastructure,” said Senate Democratic Leader Jennifer Shilling (D-La Crosse). “How are families supposed to make ends meet when wages are falling and the cost of housing, child care and student loan debt continue to rise? Republican policies that take money away from workers and reward companies for outsourcing jobs are driving our state toward another disastrous economic recession.”

In 2016, overall private sector wages declined sharply in Wisconsin by 1.3 percent and the state posted its weakest job numbers since the 2008-09 recession. Manufacturing, one of Wisconsin’s key economic sectors, has been hit particularly hard over the last six years of Republican control. In 2016, Wisconsin lost 3,784 manufacturing jobs and saw average manufacturing wages decline significantly by 4.4 percent.

“After six years of Republican tax breaks for the wealthy, Wisconsin families, businesses and communities are in a much worse position,” added Shilling. “We need to stop the attacks on working families and start investing in proven, pro-growth policies that expand economic opportunities and strengthen our middle class. Democratic solutions to invest in safe roads, expand health care access and reduce student loan debt are needed now more than ever.”

“The creation of the Wisconsin Liberty Fund, an express advocacy PAC by a sitting legislator, is patently illegal.”