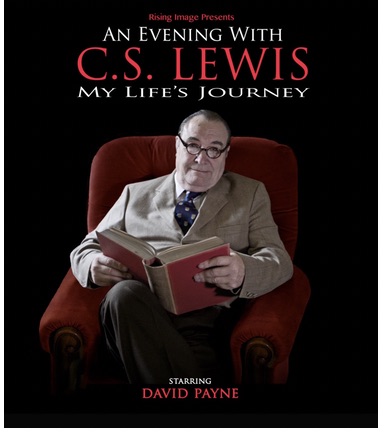 An Evening with C.S. Lewis

MILWAUKEE, WI – Wednesday, October 9, 2019 – Emery Entertainment, Inc. and Off Broadway at the Marcus Center sponsored by Associated Bank and The Fitz at The Ambassador Hotel presents AN EVENING WITH C.S. LEWIS at the Marcus Center’s Wilson Theater at Vogel Hall on February 14-16. Tickets go on sale this Thursday, October 10 at 12:00 pm and may be purchased through the Marcus Center Box Office at 929 North Water Street, Downtown Milwaukee, by phone at 414-273-7206, or online at MarcusCenter.org or Ticketmaster.com. Groups 10 or more SAVE! and should call Group Sales at 414-273-7121 x210 or x213.

The year is 1962 and C.S. Lewis, the famous British author, is hosting a group of American writers at his home near Oxford. They are about to experience a captivating evening with a man whose engaging conversation and spontaneous humor made him one of the great raconteurs of his day. Seated in his living room, he recalls the people and events that inspired his thoughts and shaped his life; of his friendship with J.R.R. Tolkien, why he nearly abandoned the Narnia Chronicles, how he came to embrace Christianity and of the American woman who turned his life upside down. David Payne’s AN EVENING WITH C.S. LEWIS has proved to be an enthralling theatrical experience, one which has led many thousands to discover, or rediscover, the continuing impact of a man who died over 50 years ago and whose collected works made him one of the literary giants of the 20th Century.

London born actor/playwright David Payne’s first encounter with C.S. Lewis was when, as a teenager, he was given a copy of Lewis’ best-selling book Screwtape Letters.  Little did he realize that some 40 years later he would be gaining a reputation for his portrayals of its famous author. He has played Lewis in a number of productions of Shadowlands, in his self-penned Weep for Joy, in more than 500 presentations of An Evening with C.S. Lewis (My Life’s Journey) and St. Jack & The Dragon a touching yet sometimes hilarious account about the relationship between Lewis and his adopted mother, Janie Moore. Payne’s latest self-penned Lewis based show is Wardrobes & Rings, which focuses on the very last meeting between Lewis and his great friend, J.R.R. Tolkien. To learn more about David Payne, visit www.aneveningwithcslewis.com.

ABOUT THE MARCUS PERFORMING ARTS CENTER
Established in 1969, the Marcus Performing Arts Center is the premier performing arts community gathering space in Southeastern Wisconsin. As the Marcus Center celebrates its 50th anniversary, it continues to build bridges between diverse members of our community through high-quality arts entertainment in the region and the state. The touring Broadway series, sponsored by Associated Bank, is recognized as bringing the best of Broadway entertainment to Milwaukee for the past 20 years and provides opportunities to educate, entertain and engage audiences. The Marcus Center is also the home to the Milwaukee Symphony, Milwaukee Ballet, Florentine Opera, First Stage plus a variety of other important community and family events throughout the year. For more information about events visit the Marcus Center website at www.MarcusCenter.org. The Marcus Center is a private non-profit 501(c) 3 corporation and is a dedicated veterans memorial in Milwaukee.

ABOUT ASSOCIATED BANC-CORP
Associated Banc-Corp (NYSE: ASB) has total assets of $33 billion and is one of the top 50 publicly traded U.S. bank holding companies. Headquartered in Green Bay, Wisconsin, Associated is a leading Midwest banking franchise, offering a full range of financial products and services from more than 240 banking locations serving more than 120 communities throughout Wisconsin, Illinois and Minnesota, and commercial financial services in Indiana, Michigan, Missouri, Ohio and Texas. Associated Bank, N.A. is an Equal Housing Lender, Equal Opportunity Lender and Member FDIC. More information about Associated Banc-Corp is available at www.associatedbank.com.

ABOUT THE FITZ AT THE AMBASSADOR HOTEL
The Fitz, located in the iconic Ambassador Hotel, is one of three reimagined dining entities opened in late June 2017.  The Fitz joins Gin Rickey and Deco Café as part of the Ambassador’s “Trifecta of Dining Excellence”.  The Fitz features a menu of bold, creative flavors, crafted with influences from yesteryear by the culinary expertise of award winning Chef Jason Gorman. The Fitz’s name is a nod to F. Scott Fitzgerald and his energy and creative storytelling throughout the roaring twenties, the decade during which The Ambassador Hotel was founded. The Fitz offers breakfast, lunch, dinner and Sunday brunch, each of which celebrates the rich history of the hotel with Gorman’s contemporary take on the classics.  Guests of the Ambassador Hotel, the Fitz, Deco Café’ and Gin Rickey are all welcome to take advantage of complimentary parking at the hotel and complimentary shuttle service to and from the Marcus Performing Arts Center.

Performances Begin on February 5, 2020 And Play for Four Weeks at the Marcus Performing Arts Center through March 1, 2020