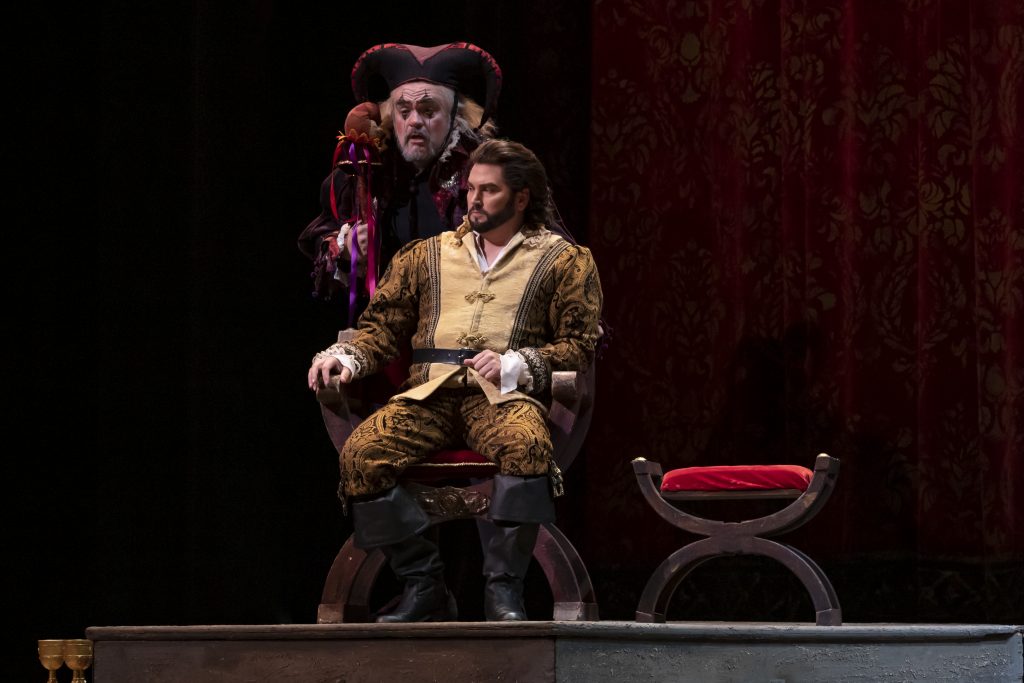 The main news should be how the Florentine Opera Company has poured opulence and some astonishingly big voices into a warhorse of grand opera. For there is nothing grander, nothing more operatic and nothing more familiar in music than Verdi’s “Rigoletto”, for two performances Oct. 8 and 10 with the essential driver, the Milwaukee Symphony Orchestra, hidden in the pit of the Uihlein Hall that used to be its onstage home.

But everything in the Milwaukee performing arts seems to be emerging from a COVID-19 cocoon – and the audience’s embrace of the return is still the big story.

The masks the packed crowd wore were an ironic comment on the masks the courtiers wear to dance or kidnap maidens. The heart-rending soliloquies were certainly akin to the loneliness of soul that modern citizens are surviving. Verdi has created an opera of unbridled evil, but even the evil are given moments of contrition.

The new partial aisles for the Uihlein orchestra seats eased patrons climbing over dozens of their peers to get to their seats, and were an inevitable nod to the new safety measures all theaters are now providing.

Not all the stops the production pulled out were of equal worth, but let’s start with the most worthy — performers new to the Florentine, particularly Scott Quinn as the serially amorous Duke of Mantua and Jessica Jones as Gilda, Rigoletto’s naïve daughter who falls under the duke’s spell (an understatement to say the least – Verdi will require her to be stabbed, stuffed in a sack and emerge 10 minutes later singing one of his most poignant prayers).

Quinn, a lyric tenor with power in his lower range, may draw inevitable comparisons to a different kind of tenor voice (Pavoratti whose performance of “La dona e mobile” is famous) but Quinn finds his own stylish veneer for this devilish Casanova. We sense (even as we despise) his charm over women. Quinn not only relishes playing the seductor but modulates those big tenor notes in a thrilling descent into pianissimo, capturing the quiet edge Verdi sought in even his biggest music.

Even more adept is Jones, a lyric coloratura venturing away from modern music in a performance worth cherishing. She not only encompasses all the coloratura heights and trills Verdi could demand – “Caro Nome” is instantly familiar to audiences and the ultimate test of a soprano’s range and musicality. Jones forces a natural stillness around her acting and singing that made painfully human a suffering devotion that today’s women would scorn. Her soprano is like liquid gold flowing above the mass of male voices Verdi attacks her with.

Sometimes I wish that grand opera wouldn’t cost so much to mount, but no one can say the Florentine isn’t putting the wealth onstage. It’s able to thanks to the growth of regional opera. The sets where the wine-guzzling court revels and the gloomy arches where revenge lurks are so lavish they require interminable pauses within acts to change; they are from the New Orleans Opera. The endless streams of detailed medieval costumes come from the Utah Symphony & Opera. I fear that some singers brought with them traditions polished elsewhere, which made the brace of fresh and malleable performers quite welcome.

Stage director Omer Ben Seadia, maneuvering between old and new, offers her best work in echoing traditional renaissance tableaus and specifying the internal action among singers in duets and foursomes. But there seemed to be some tension between the performers trained to find internal truth without gimmicks in the extended musical interludes and those who lean on the excessive mime and group cavorting of old opera techniques.

The male members of the Florentine Chorus are a full and needed force to create the caverns of chorale sound essential to the story (musically stunning), but there should be some way to not make all 16 courtiers rush so mightily on several occasions in and out of the exit doors. Couldn’t they hold lots and get eight to agree to sing from backstage?

The first act for the angry jester (Rigoletto) of Todd Thomas was consumed in that largely useless mime and cavorting. Patrons rarely felt the sting of the evil Don Rickles being talked about (supertitles above the stage provided an English translation of the Italian). Thomas recovers when his singing gifts are front and center in tender duets with his daughter Gilda or in penetrating deep groans for revenge. He succumbed to the old stage-front style of performance, but by the conclusion he was providing a powerful vision of how rage consumes the rager.

With all respect to the fine singers, I called the MSO the “essential driver” from the pit, because the constant need for an attentive full orchestra to capture and subdue motifs reinforces that opinion. Much of that success was due to the baton of Florentine artistic adviser Francesco Milioto paying exact anticipation to the needs of the singers and the modulations required by Verdi’s familiar but still underrated score. Centuries ahead of television and movies Verdi knew how to plant a theme or a phrase that comes back to haunt us.

Trying to explain the plot of deception, abduction, revenge and murder for hire makes it sound like a piece of Gothic literature the Bronte sisters would reject. If the story defies realism, Verdi demonstrates that the hypnotic manipulation of score and love songs – and the Italian! Always the Italian! – transports us beyond such trivialities as logic. The plot may have meant something in 1851, when the privileges of the entitled class, the absolute authority of the ruler and the role of women as playthings lent spiritual meaning – and even some outrage against Verdi’s politics. Few would see parallels for today, would they?

In a large cast of capable singers, there were some standouts: The chilling basso notes of Edwin Davis as the assassin Sparafucile; the musical anguish of baritone-bass Alan Higgs, whose curse of Rigoletto sets the story in motion. Olivia Vote as one of the Duke’s side mistresses tries for a naturalistic presence but her singing proves too light in an important Verdi quartet.