Wisconsin saw the highest number of eviction filings this year in September.

By Diane Bezucha, Wisconsin Public Radio - Oct 1st, 2021 01:38 pm
Get a daily rundown of the top stories on Urban Milwaukee 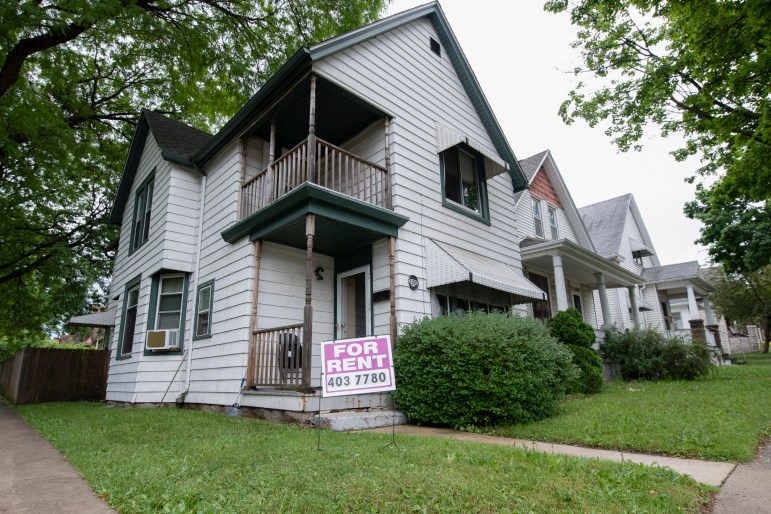 A “for rent” sign is seen outside of a home on Griffin Street in Milwaukee on June 29, 2021. With long waits for rental assistance and the growing tide of evictions looming, some renters are questioning how Milwaukee County and the city will keep thousands of residents afloat. Isaac Wasserman/Wisconsin Watch

When the United States Supreme Court struck down the national eviction moratorium a month ago, advocates predicted a “tsunami” of evictions. In many places across the country, the anticipated surge has not materialized.

But in Wisconsin, the situation is complicated.

According to Wisconsin Circuit Court Access data, eviction filings have increased by 55 percent since the moratorium ended.

“We will have the highest number of eviction filings for 2021 in the month of September. That is concerning,” said Michael Basford, director of the Interagency Council on Homelessness​, which tracks Wisconsin’s eviction data.

Despite this sudden increase, eviction filings have still not returned to pre-pandemic levels and eviction judgments have remained relatively low. Advocates say this is because more tenants and landlords are taking advantage of the state’s emergency rental assistance programs to recoup losses.

“We have seen a huge increase in applications in all of our 10-county region,” said Debbie Bushman, VP of housing program developments and compliance for Newcap, the nonprofit that administers rental assistance in Brown County.

But increasingly long wait times for receiving rental assistance have frustrated tenant and landlords alike, and could mean that the tidal wave of evictions is still on the horizon.

Milwaukee tenant Laura reached out to WPR’s WHYsconsin about why her emergency rental assistance check was taking so long. She asked that she only be identified by her first name.

“I mean, they’re telling me that I’m approved, but I don’t know,” she said. “I don’t know when they’re going to get the check because I’ve been given so many different dates.”

In the spring of 2020, Laura had to quarantine due to COVID-19 exposure and also had carpal tunnel surgery. She ended up missing two months of work and fell behind on rent.

She and her four children have lived in the same apartment for nine years and Laura said she has never had an issue paying rent until now.

Laura’s back at her job as a mobile fueler and on top of her rent again, she said, but hasn’t been able to make up for the months she missed. In total, she owes her landlord $3,050.

Laura said calls and emails to Community Advocates often go unanswered. The communication she does receive includes conflicting information. One email says her check was sent Aug. 23, another says it was sent Sept. 13. One message said to “allow 15 to 45 business days or more” for her landlord to receive the payment.

So Laura started using her day off every week to go into the office and ask for updates. She says she has even written to Gov. Tony Evers.

But she is still waiting. And frustrated.

“You can’t talk to anybody. They tell you they’re not available. You can’t get a person’s direct email,” said Laura. “It just doesn’t seem right.”

‘People could be evicted while they’re just waiting’

A big part of the problem is that organizations are simply struggling to keep up with the demand, said Andy Heidt of Wisconsin Community Action Program Association.

WISCAP Association is the conduit between the state and the community agencies that distribute emergency rental assistance funding to the majority of counties in Wisconsin.

Heidt said they’ve been averaging about $2 million per week in payments, but lately it’s been higher because they’ve gotten the word out and more people are applying for assistance since the moratorium ended. The last couple of weeks have been among their largest payments, said Heidt.

“So the positive is we’re putting out a lot of money right now. The negative is, we’re starting to have longer wait times in processing eligibility and applications,” said Heidt.

Depending on the program, people can apply for up to 18 months of rent and utility assistance if they make less than 80 percent of the area median income and can prove they were financially impacted by COVID-19.

“Lots and lots of people can say yes to those two questions,” said Heidt. “The stories are heart-wrenching.”

As of Sept. 13, U.S. Census Household Pulse Survey estimated that more 94,119 Wisconsin residents live in households that are behind on rent and mortgage payments.

In response, agencies are trying to hire more staff. But hiring and training takes time, said Heidt. In addition, some locations may be waiting on additional funds, adapting to new databases, or in the city of Madison’s case, transitioning from one provider to another.

“It’s a little confusing and it’s slowing things down at a time when we need things to be sped up because the moratorium is no longer there,” said Heidi Wegleitner, an attorney with Legal Action Wisconsin.

And the consequences of that delay are very real.

“People could be evicted while they’re just waiting for their rent assistance application to be processed,” said Wegleitner.

Some tenants may not even know they can access emergency rental assistance and legal aid until they walk into their initial eviction hearing, said Wegleitner. And in some counties, a hearing could be on a Tuesday and the trial may be as early as the following Friday.

“Well it takes a lot longer (than three days) to actually submit an application, get that application approved and get a check cut to the landlord,” said Wegleitner. “That makes things very challenging for tenants.”

In an effort to triage, rental assistance providers like Newcap and Community Advocates have been prioritizing tenants and landlords with active eviction filings.

“Usually if a landlord files for an eviction, it’s at least three weeks before they get a court date,” said Newcap’s Bushman. “So we’re hoping to get to them before that court date actually happens.”

And she is not alone.

Nora R., 50, also applied for emergency rental assistance from Community Advocates in April and is still waiting on her check. She asked only to be identified by her first name and last initial.

She said that during the pandemic, she had to leave her job at an Amazon warehouse to take care of her 10-year-old son. While she was out of work, she fell $5,000 behind on rent, so she applied for rental assistance.

While she was waiting, Nora said she used her entire tax return to pay her landlord. An injury has kept her from returning to work and now she owes another $5,000 in rent.

Like Laura, Nora received inconsistent information from Community Advocates. She and her landlord were notified in April that she was approved for rental assistance and would be receiving payment once they completed paperwork. But no check came.

In August, Nora’s landlord received an email asking him to resubmit documentation as the employee managing Nora’s case was no longer employed at the agency.

Nora said she is constantly worried her landlord will simply get sick of waiting and evict her.

“It’s frustrating for him, too,” said Nora.

According to the two women, both of their landlords have threatened eviction, but technically they can’t follow through. When a landlord agrees to accept emergency rental assistance, they sign an agreement that, depending on the county, essentially says they cannot evict a tenant within 30 days of receiving payment.

But if payment is nowhere in sight, what’s to stop a landlord from simply giving up? As landlords wait for payments, the clock ticks, leases expire and patience wears thin.

‘We’re doing whatever we can’

When WPR asked Community Advocates about the exceptionally long delays in these two cases, housing strategy director Deb Heffner said, “It is unusual.”

According to Heffner, a completed application is generally reviewed and approved within two weeks. Once approved, the tenant’s landlord is notified and asked to complete paperwork like a landlord agreement. Once all paperwork is submitted, Heffner said payment should be issued within about five days.

Even if someone — tenant or landlord — drags their feet uploading the proper documentation, that timeline adds up to about six weeks.

For Laura and Nora, the wait has been nearly six months. And counting.

In a follow-up conversation, Heffner acknowledged that the organization has been straining to keep up, making it difficult to address the processing and payment delays in each case.

“I know a day seems like a year when it’s your situation and the threat of losing your home is terrifying,” said Heffner. “We take full ownership of any delays and we’re doing whatever we can to get better.”

She added that both tenants could call her cell phone directly.

“We’ve never had this much need and this many resources,” said Heffner. “And the urgency has picked up.”

Community Advocates currently has about 12,000 applications in Milwaukee and Waukesha counties, and a queue of over 4,000 people who have been approved and are waiting for their checks.

But the agency exhausted their $20 million in funding earlier this month and Heffner said they have been waiting on additional funds from the state. Those funds arrived on Thursday and with the six new staff members they hired, Heffner said she hopes to start distributing the new allocation by next week, which is good news for Laura and Nora.

Still, six months is a long time to wait.

“If you ask me, it’s a joke. They tell you you’re approved and then there’s no money,” but you can’t pay rent with an approval, said Nora.

Editor’s note: If you were financially impacted by COVID-19 and need help paying your rent or utilities, visit https://doa.wi.gov/Pages/WERA.aspx.

Evictions in Wisconsin have increased since moratorium ended, and may get worse if rental assistance delays continue was originally published by Wisconsin Public Radio.