Some have suffering declining business. But others are growing.

By Edgar Mendez, Milwaukee Neighborhood News Service - Oct 18th, 2020 10:29 am
Get a daily rundown of the top stories on Urban Milwaukee 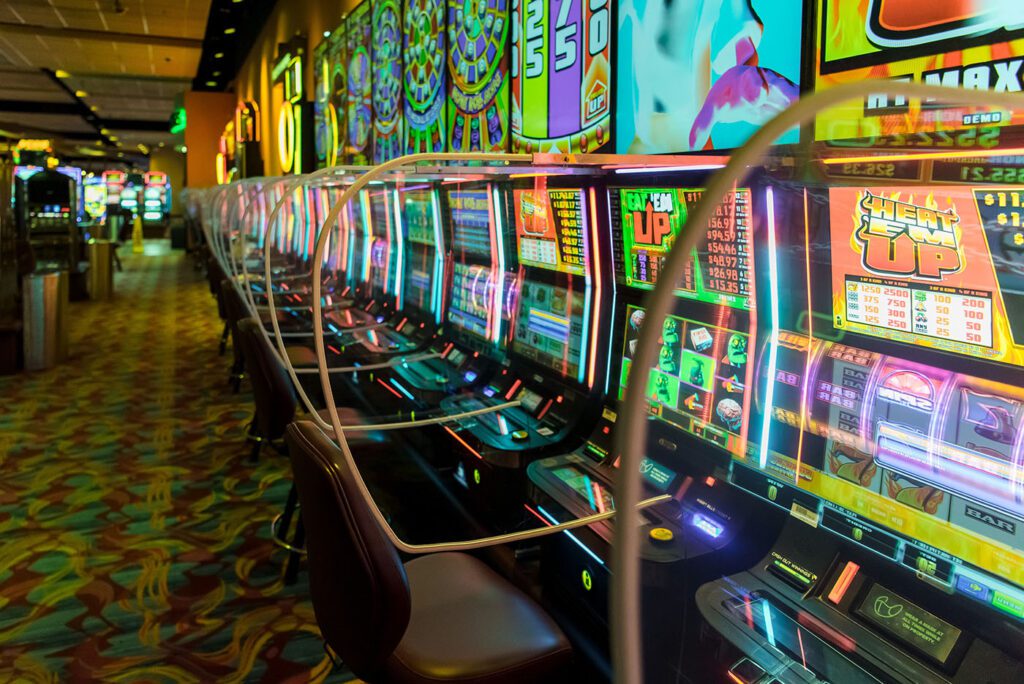 Slot machines at the casino are now separated by Plexiglass. Photo provided by Potawatomi Hotel & Casino/NNS.

In mid-July, Rodney Ferguson, CEO and general manager of Potawatomi Hotel & Casino, was faced with the unenviable task of informing 1,600 employees that he didn’t have work for them anymore.

“It was extremely difficult because it’s a family here,” Ferguson said. “It hits close to heart and close to home because many of them have been here since the opening.”

The casino is the business hardest hit by the fallout from COVID-19 in the Menomonee River industrial valley. A few firms, such as Palermo’s Pizza, have actually added employees, though others, such as the Harley-Davidson Museum, have struggled as well.

Potawatomi, a major employer and philanthropic supporter in the city, opened in the Menomonee Valley as a modest bingo operation in 1991. The casino has since expanded several times, adding a hotel tower in 2014 and a second tower in 2019. The casino and hotels were set to accommodate the throngs of visitors expected in town for the Democratic National Convention this summer.

But the pandemic ruined those plans, shutting the casino from March to June. Employees were kept on the payroll until furloughed workers were permanently laid off in July.

Since reopening June 8, capacity at the casino has scaled up from 400 visitors to its current limit of 3,000, Ferguson said.

Visitors no longer need reservations to visit the hotel or casino, though table and bingo games remain closed, and bars and restaurants offer only to-go service, he added. The casino currently employs roughly 1,000 workers.

A return to normal operations for the casino, said Ferguson, is largely dependent on a vaccine that still doesn’t exist.

“That’s what the virus has done across the state, country and the world,” he said, discussing the coronavirus’s impact. “As the vaccine comes into place, we will try to hire as many people back as possible.”

Until then, he said, the casino will continue to employ safety measures to keep employees and the public as safe as possible, including limiting capacity, regular cleaning of machines and other areas, Plexiglass dividers between slots and temperature checks.

On the western end of the Menomonee Valley, between Potawatomi and Miller Park, sits L & R USA Inc., a medical equipment and supply company based in Austria and Germany. The company has been able to maintain its 70-strong workforce and add 20 temporary employees since the pandemic began, said Lindsay Ryback, a senior product manager for the company.

Sales took a hit early in the pandemic, she said, but a government contract to produce 400,000 face masks helped the company supplement reduced sales of medical equipment.

“We adjusted some of our operations to make the masks, and we’re able to help save lives across the world,” she said. 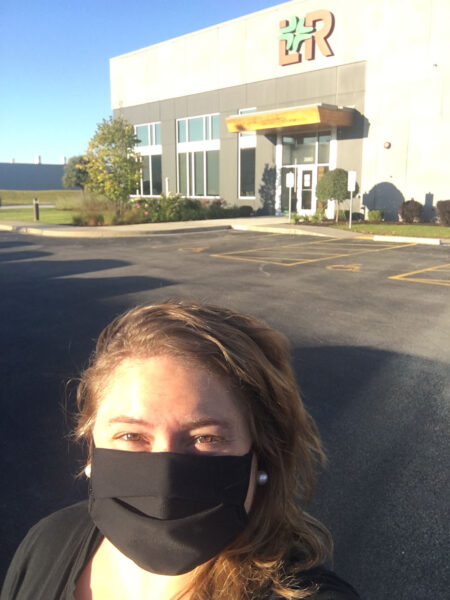 Lindsay Ryback, a senior product manager for L & R USA Inc., wears a mask that was developed and produced by her company after the pandemic began. Photo provided by Lindsay Ryback/NNS.

Ryback said that once the order was completed, the company developed its own washable and reusable masks and added other new products to help sales reps pick up new business for the company. Like Potawatomi, the organization introduced numerous safety measures, including mandating masks in the building, keeping office personnel at home, hiring a porter to clean the building and limiting visitors, to keep workers safe.

“We were very focused on supporting our people during the pandemic,” Ryback said.

Corey Zetts, executive director of Menomonee Valley Partners, said the pandemic’s effect on Valley businesses has varied. The hardest hit, obviously, was Potawatomi, the Valley’s biggest employer. Another Valley business that shut down for several months and is now open at limited capacity, Harley Davidson Museum, has also struggled, she said.

Other Valley companies, including meat producer Cargill, have gone into a hiring mode since the pandemic began, Zetts said. Palermo’s Pizza expanded its refrigeration market and is in the process of hiring as many as 100 more employees, she added.

Catrina Crane, director of workforce development and business solutions for Menomonee Valley Partners, said Valley companies teamed up to hold a drive-up job fair and have been supporting each other in other ways since the pandemic began.

“Many of them were sharing their processes for screenings and temperature checks, and they shared information on signage and other tips to keep employees from contaminating each other,” Crane said. They also shared resources on child care, provided guidance on how to increase internet bandwidth for those who were working from home, and helped each other access essential safety items such as gloves and hand sanitizers, she said.

Another important aspect of helping Valley businesses navigate the pandemic has been working to support employee morale, Zetts said. Among the challenges employers faced were quelling animosity for workers who had to be on site versus those who were able to work from home. Ryback said her company has been treating its employees to box lunches, other treats and offering incentives as a way to show their appreciation.

Valley businesses have also tried to minimize the negative effects of employees having to socially distance from each other.

“Outdoor spaces are now more important than ever,” Zetts said. “Employees have been able to get outside, explore the Valley and have safe interactions with others.”

As for Potawatomi, there’s no telling if or when the company will get back to normal, Ferguson said.

“We’re appreciative of all those guests who returned and understand the many who haven’t for obvious reasons,” Ferguson said. “To this day we knock on wood that none of the cases have been traced back to our property and that our team members and guests have stayed safe.”