North Side Rising gives north siders a voice for climate and economic equality.

By PrincessSafiya Byers, Milwaukee Neighborhood News Service - Sep 18th, 2020 11:28 am
Get a daily rundown of the top stories on Urban Milwaukee 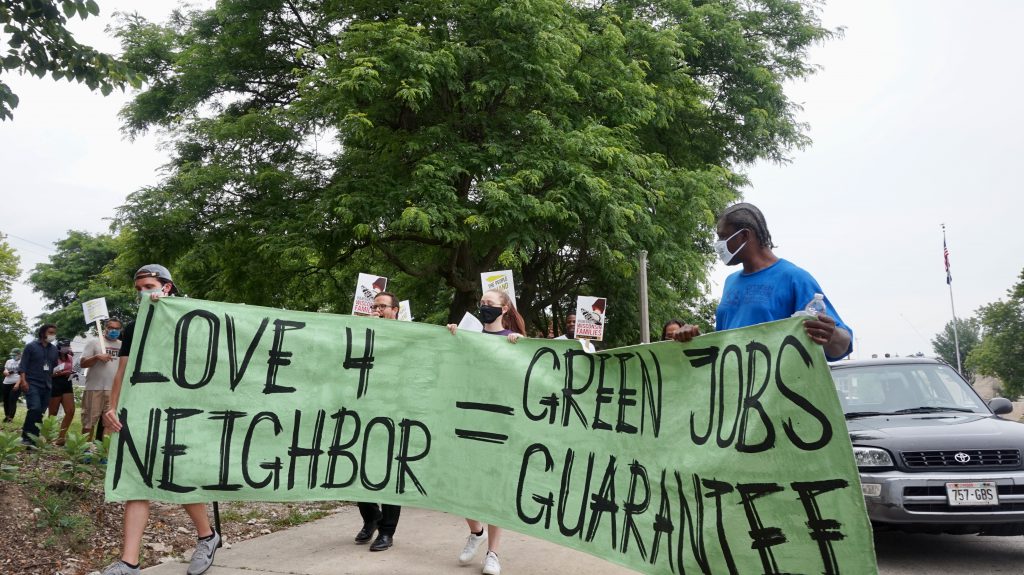 North Side Rising is fighting for environmental and economic equity for North Side residents. Photo by Bridget Fogarty/NNS.

Since the beginning of the COVID-19 crisis, people across the nation have been struggling to make ends meet, and advocacy groups and organizations have sprung up to voice people’s needs.

One of the newest such groups in Milwaukee is North Side Rising, which in its first weeks mounted a protest in hopes of extending the state moratorium on utility shutoffs.

The group is affiliated with Citizen Action Wisconsin, a nonprofit coalition that focused on social,  economic and environmental justice.

The group’s goal is to create better lives for residents on the North Side of Milwaukee by advocating for the Green New Deal, a proposed package of legislation meant to address climate change and economic inequality.

For years, Rafael Smith, climate and equity director of Citizen Action, saw a need for North Side residents to have economic power.

As a child, he heard the stories of how the area was home to a thriving community with endless economic opportunity.

So when he was given the opportunity to help rebuild the community, he took it. With a team of others invested in the North Side, he created North Side Rising.

“It was an idea I had in my back pocket for a long time,” Smith said. “I knew that the North Side needed environmental, climate and economic justice, but I didn’t know how to get it.”

After spending time working in Washington D.C., for the Washington Interfaith Network, which trains  and develops neighborhood leaders, he found inspiration.

“I noticed that when people wanted something, they were at the table from the beginning,” he said. “I had never seen that in Milwaukee.”

He hopes that by taking a seat at the table from the beginning, North Side residents will not be left out of the economic prosperity he feels the Green New Deal could bring to the city.

Dana Kelly, the lead organizer for North Side Rising, got involved because she grew tired of others telling her community what it needed to do to flourish

“We know what we need,” she said. “We just have to learn to advocate for ourselves.”

Kelly said the Green New Deal could provide landscaping, roofing and weatherization jobs in communities of color, as well as provide some relief from health issues, such as asthma, that disproportionately affect people of color.

“If we want to live and have a vibrant life, this type of work is important,” she said.

Trevonna Sims, the Southeastern Wisconsin organizer with Citizen Action who was born and raised on the North Side, said the group seeks to get “more people involved to tackle issues that go against equity in that part of the city.”

More on North Side Rising